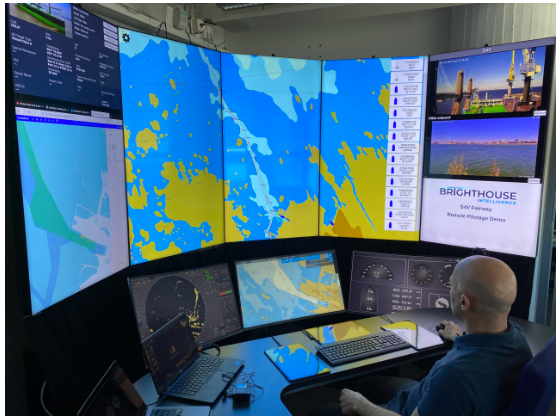 Finland at the international forefront of developing remote piloting technology

The first ship equipped with the technology of future fairway services was directed from the Port of Kokkola to the fairway on Wednesday. At the same time, the suitability of the technical arrangements for remote piloting was tested. The systems were used in parallel with normal pilotage.

The development of future fairway services is part of the Sea4Value Fairway program, where companies and universities are exploring the technology, data, practices, and security used in remote piloting and the maritime route of the future. The aim is to promote safer, more efficient, and sustainable maritime transport through digitalisation.

Pilots on board and in front of screens in Turku

The pilot Timo Nummi of Finnpilot Pilotage was involved on the Viikki bridge to enable the timely transmission of the ship’s maneuvering commands to the remote pilotage center. Pilot Ville Mattila analyzed the remote piloting situation.

Remote pilot Joakim Kantola followed the visualized information from screens in Turku.
“It was interesting to get to know how future fairway technologies could support the work of the pilot,” says Pilot Kantola.

The remote piloting used a data acquisition and transmission system as well as remotage pilotage center developed by Brighthouse Intelligence and safety contours -visualization of Awake.ai. The information about the fairway traffic generated by Fintraffic VTS’s radars was transmitted to remote pilots via an open interface.

“It was great to bring our expertise in the field of autonomous and remote solutions for marine to the project and at the same time develop new solutions for the needs of the intelligent fairway and remote pilotage,” says Markku Sahlström, CEO of Brighthouse Intelligence.

According to the Pilotage Act, remote piloting has been possible in Finland since 2019. The information and experience gathered in the Fairway project and the current experiment will be used in the implementation of the remote piloting process and technology. The experiment provided important practical experience for future development work, for example on whether the systems used worked correctly, whether the right kind of data was collected, and whether all the necessary information was transferred to the remote pilots at the right time.

“Although various autonomous vessels have been tested in Finland and around the world for a few years now, and we are at the international forefront in the development of remote pilotage, the implementation of remote pilotage itself is still years ahead. However, this was an encouraging experiment, and we are now a little closer to that date,” says Sanna Sonninen, Pilotage Director of Finnpilot Pilotage.

Finnpilot Pilotage Ltd
What's your opinion on this?
Login or register to write comments and join the discussion!
Read more...

Article Finnpilot to undergo reorganisation as of 1 October 2020

Finnpilot’s present six pilotage areas will be merged to form four pilotage areas. New District Managers have been appointed to head the pilotage areas. At the same time, an Operational Executive Committee will be established for Finnpilot. The organisational change, which was planned in close co-operation with the personnel, will take effect on 1 October 2020.

"The purpose of this video is to demonstrate communication between the Remote Pilot and the vessel’s Captain. The simulations are experiments."

The remote control of ships is in development across the maritime industry and the technology enabling it presents opportunities to improve operations and safety, while reducing costs. In this film, we look at the successful SeaOwl Remotely Operated Services at Sea (ROSS) project, with commentary from some of the many people involved in its development.
Learn more: https://marlink.com/remoteops/

On March 15, 2021, about 1302 local time, the oil tanker Riverside with a crew of 21 and 2 pilots was transiting outbound from the port of Corpus Christi, near Ingleside, Texas, in a loaded condition when the vessel lost propulsion and struck the no. 4 loading dock at the Moda Ingleside Energy Center. 1 No pollution or injuries were reported. Damage to the vessel was estimated at $550,000. The estimated property damage to the facility was $7 million.

On November the 8th 2020 container feeder vessel Munksund collided with the RoRo cargo vessel Balticborg. The collision occurred, most likely caused by banking conditions, in the eastern section of the Kiel Canal near km 96. This is a combined 2D/3D representation of the collision created with MSG Prospector, MSG Plotter and Google Earth.

Article USCG: Ever Forward pilot was distracted before grounding
231

Opinion 1000 stanchions around… Which ones are correct and which ones are killers?
197
Opinion What is a Tug's Bollard Pull and How İt is Calculated?
165