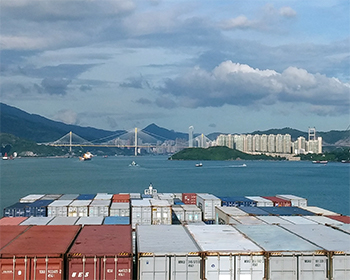 Under a new agreement forged between the Hong Kong Pilots Association and local government officials in Shenzhen, Hong Kong pilots have been given leave to navigate ships into Yantian Container Terminal, and Shenzhen pilots may navigate vessels from Yantian through Mirs Bay to the Kwai Chung container terminals, shipping website JOC has said.

The amendments represents the first time pilots from Hong Kong and Shenzhen have been allowed to navigate in the other’s respective waters, eliminating the need for a mid-ocean transfer of personnel.

As a result, liner services should benefit from improved transit times between Hong Kong and Shenzhen after marine pilots agreed to new operating procedures that will ease a pilots’ shortage that has hobbled operations at YICT since March.

The new procedures, launched last week following up-to-the-wire talks between the Hong Kong Pilots Association and government officials, aimed to avoid a scenario in which pilot boats would have to register in the same way as commercial ships.

Liner firms told JOC.com the new arrangement should also help mitigate a shortage of pilots at Yantian. Since March, “Yantian pilot availability has been tight, and pilot service might not have been available at the requested time,” Hapag-Lloyd said, adding that delays caused by the pilot shortage have effectively reduced terminal operations at YICT by 10% to 20%.

Roberto Giannetta, managing director of the Hong Kong Liner Shipping Association, said that the cross-certification of pilotage service also means carriers only have pay for a single pilot per transit, instead of two under the previous arrangement.
Original Article by HK Maritime Hub
What's your opinion on this?
Login or register to write comments and join the discussion!
Read more...

On the first day of the "IMPA safety ladder campaign 2020", Joris Stuip, Vice President PTR Holland is rightly upset about obviously fake and manipulated certificates at Pilot Ladders. They are playing with the safety of the pilots.

Brisbane Marine Pilots launched their new website. Go to www.brisbanepilots.com.au to find out more about BMP. There you will also find useful links to the Port Procedure Manual, Pre-Arrival information for visiting vessels, tides and weather updates.

Impressive to see how the Cork Pilot boat ‘Fáilte’ draws parallel to the bow of the moving Brittany Ferries ferry ‘Pont-Aven’, as it departs Cork harbour on a warm sunny afternoon, on Saturday, October 3rd, 2020. Cork harbour is a beautiful place, with plenty of stunning views to enjoy, while departing for the open sea, enroute to Roscoff, France. This particular sailing was very enjoyable, though quiet, due to coping with the Corona virus, which was managed excellently onboard. The ‘Pont-...

Article USCG: Ever Forward pilot was distracted before grounding
231

Opinion What is a Tug's Bollard Pull and How İt is Calculated?
165