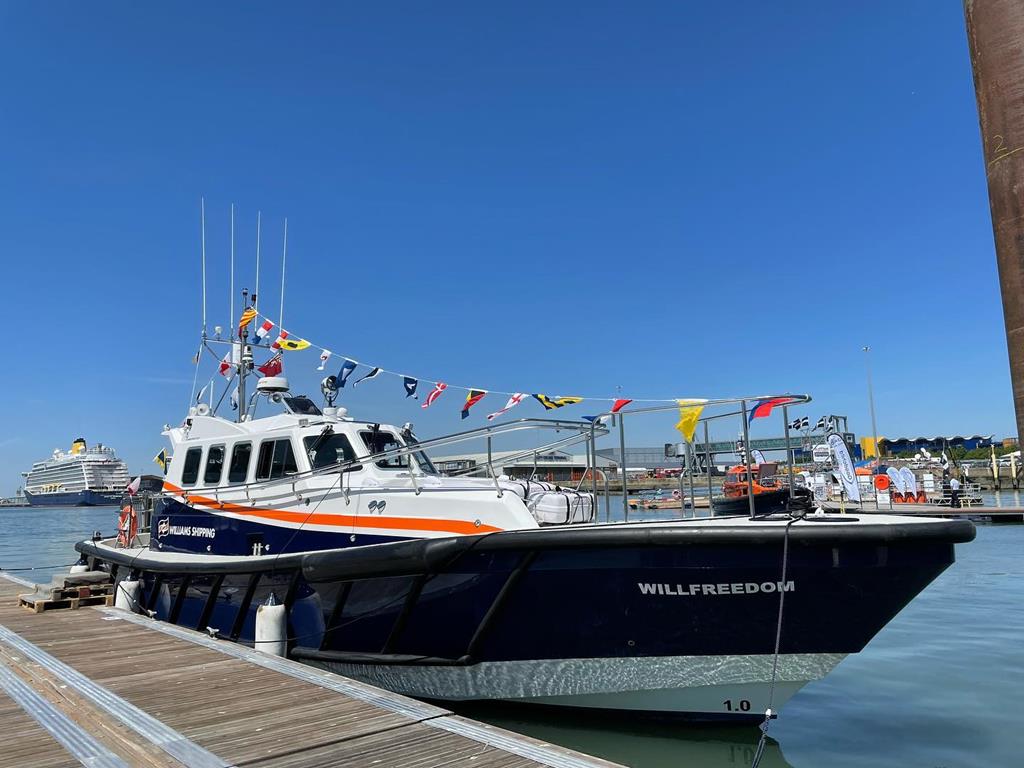 Williams Shipping has added a new vessel to its port-service fleet in the Solent, UK as demand rises in the maritime hub.

Willfreedom is a fast launch and pilot vessel built by Safehaven Marine, Ireland which will be ready for service June 2022.

It is classed to the UK Maritime Coastguard Agency’s Workboat Code Cat 2 for operating 60 nautical miles with up to 10 passengers and as a pilot boat. It has a shallow draught of 1.3 m and a beam of 4.4 m.

Willfreedom will be used to transfer crew and pilots to ships in the Solent waiting to enter Southampton and Portsmouth ports.

Williams Shipping managing director for marine Philip Williams said at Seawork Willfreedom could be retrofitted with hybrid propulsion and alternative sources of power in the future.

Riviera Maritime Media went on board Willfreedom as it was moored at the Seawork 2022 event, held 22 June in Southampton, UK.

On the bridge of Willfreedom are Raymarine radar, multipurpose displays, GPS, AIS and sonar. Icom supplied the VHF fixed and handheld communications equipment and Flir supplied the thermal imaging camera and emergency beacons.

The HamiltonJet waterjet is one of the most advanced and innovative marine propulsion systems in use today, and is at the forefront of waterjet propulsion technology. Now we are also consistently delivering vessel autonomy solutions in conjunction with our waterjet technologies.

Pilot vessel Tribulation shadowing Ramble on Rose out of Cairns .5/10/20

Opinion What is a Tug's Bollard Pull and How İt is Calculated?
462

Opinion Pilots are not Advisors to Masters
117