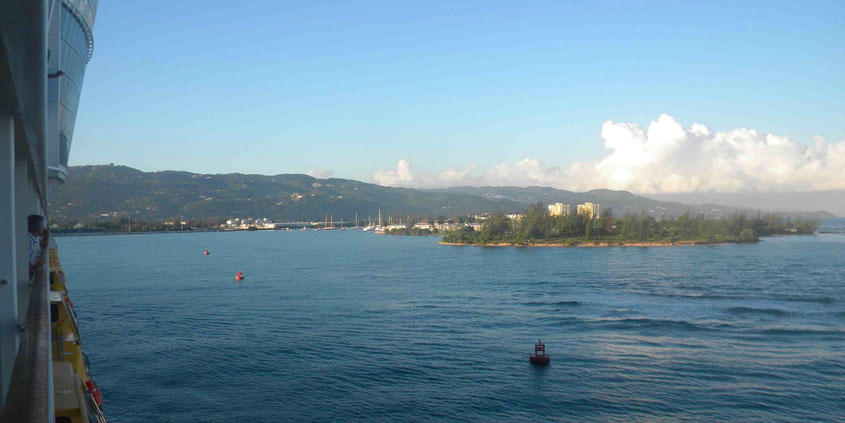 pictures and article by "The Cleaner"

Every time we see a ship entering or leaving a Jamaican port, we can rest assured that no matter how massive that cargo or cruise ship may be, there is a Jamaican marine pilot at the helm. He is skilfully guiding that vessel into or out of harbour with knowledge and experience that assures the safety of that ship, all the personnel aboard and its valuable cargo.

For centuries, the world’s shipping interests have employed pilots with local knowledge of depths, tides and currents to guide vessels into or out of port safely – or wherever navigation may be considered hazardous, particularly when a shipmaster is unfamiliar with the area.

The International Maritime Organization, a specialised agency of the United Nations responsible for regulating shipping, notes that in addition to local knowledge and expertise, pilots are able to provide effective communication with the shore and with tugs, often in the local language.

Qualified pilots are usually employed by the local port or maritime administration, and provide their services to ships for a fee, calculated in relation to the ship’s tonnage, draught or other criteria.

Pilot Roy ‘Roxy’ Fuller, one of the founders of the Jamaica Marine Pilots Association, possesses a wealth of knowledge on the history of Jamaica’s marine pilots. He recently retired as a member of that elite group after giving 47 years of service to the island’s shipping industry and is happy to share a few facts with us.

EXPERT Navigator
Pilot Fuller said a marine pilot is an expert in ship handling and navigation, licensed to operate in specific ports and pilotage areas by a competent authority. In Jamaica, that authority is the Port Authority of Jamaica. The Jamaica Marine Pilots Association (JMPA) was formed in 1976 and among the founding members were Pilots Hermon King, A.E.’Duke’ Fuller, Danny Welch, Malcolm Jones and Roxy Fuller. The JMPA was formed to oversee the welfare of pilots and to provide a platform for the negotiations and voice of the pilots with the Port Authority of Jamaica.

The highlights of the JMPA’s achievements over the years include improvements in remuneration; negotiating the 20 per cent duty on motor vehicles in light of the intensive islandwide travelling to the ports; the acquisition of modern pilot boats for the Kingston service; and permanent offices with overnight accommodation, uniforms and other amenities.

The current president of the JMPA is Pilot Hubert Kerr, who has already given 37 years of service as a licensed marine pilot and has also previously served as president. He points out that the marine pilots were the first to take precautionary actions in the COVID-19 pandemic as they had kept abreast of international news, especially as it concerns shipping. He says that from as early as in January of 2020, the local pilots got word of what was happening in Wuhan, China, and because they have to pilot ships coming from that country, they were wearing masks and sanitising their hands from that time.

Pilot Kerr also notes that his administration is now negotiating with Tax Administration Jamaica on behalf of the 26 members of the JMPA, because they feel there needs to be some sensitivity to the unique aspects of pilotage, especially with regard to how salaries are determined. He says that the job requires tremendous mental and physical effort and that the current pandemic has made things even more difficult. For example, during the closure of hotels, pilots had nowhere to stay overnight and so had to travel many miles, sometimes in the dead of night, to get to ports and then immediately board ships to bring them safely to dock.

“We are also trying to get improved health insurance coverage for our members,” Pilot Kerr states, adding that the welfare of retired marine pilots is a top priority for the association.

The JMPA is also placing a lot of emphasis on the training of marine pilots to meet the demands of increased shipping globally. He says that the JMPA is committed to maintaining the highest international standards in pilotage in Jamaica.

Jamaica has earned a worldwide reputation of providing the best pilots in the region, especially in the areas of technical skills and manoeuvring, and both pilots Fuller and Kerr and believe that this results from the rigorous and thorough training that apprentices must undergo before they are allowed to carry out any piloting on their own.

There are six regularly used ports around Jamaica and every apprentice pilot needs to have four years of training in navigating each of them, and is tested separately at those ports before being allowed to pilot on their own.

Requirements
Persons interested in becoming a marine pilot can apply to become apprentice marine pilots if they have graduated from a recognised maritime institution; hold a minimum Class III foreign-going certificate; have a minimum of two years as a navigating officer in charge of a watch; and have working knowledge of electronic chart display and information system, and bridge resource management.

The successful candidates must be available for training at nights, on weekends and public holidays; will be required to embark and disembark pilot ladders in adverse weather conditions while the vessel is under way; and must be medically and physically fit to perform the duties of a marine pilot.

The shipping industry takes this opportunity to salute the marine pilots of Jamaica – past, present and future – for their sterling contributions to our nation’s development as we proudly celebrate the 58th anniversary of Jamaica’s Independence.
You can read the original article here
Editor's note:
Opinion pieces reflect the personal opinion of individual authors. They do not allow any conclusions to be drawn about a prevailing opinion in the respective editorial department. Opinion pieces might be deliberately formulated in a pronounced or even explicit tone and may contain biased arguments. They might be intended to polarise and stimulate discussion. In this, they deliberately differ from the factual articles you typically find on this platform, written to present facts and opinions in as balanced a manner as possible.
What's your opinion on this?
Login or register to write comments and join the discussion!
Read more...

Video The Basics of Ship Handling

by Bloomberg, Europe - published on 4 October 2022

The European Union proposed making so-called pilot services exempt from sanctions targeting the transfer of Russian oil that are set to kick in this year to punish Moscow for its invasion of Ukraine.

This video shows us what all takes place during unmooring and pilotage operation in detail. Must watch for all.

I am not a computer savvy. My knowledge in programming and robotics and those sort of things is nil. I get lost in the sea of social media and easily entangle myself in the web. All I have done for the last 25 years or so is to pilot ships through the Panama Canal. However, during the last couple of years I have done my best to catch up with technology, since it has enhanced our possibilities and improved safety in our field. But still, I have to admit that I am way behind the new guys in this important issue.

This is another documentary in the Look at Life Vol One - Transport series called - Strait of Dover - A closer look at the 750 ships that pass through the five-mile wide shipping channel every day from June 1967.