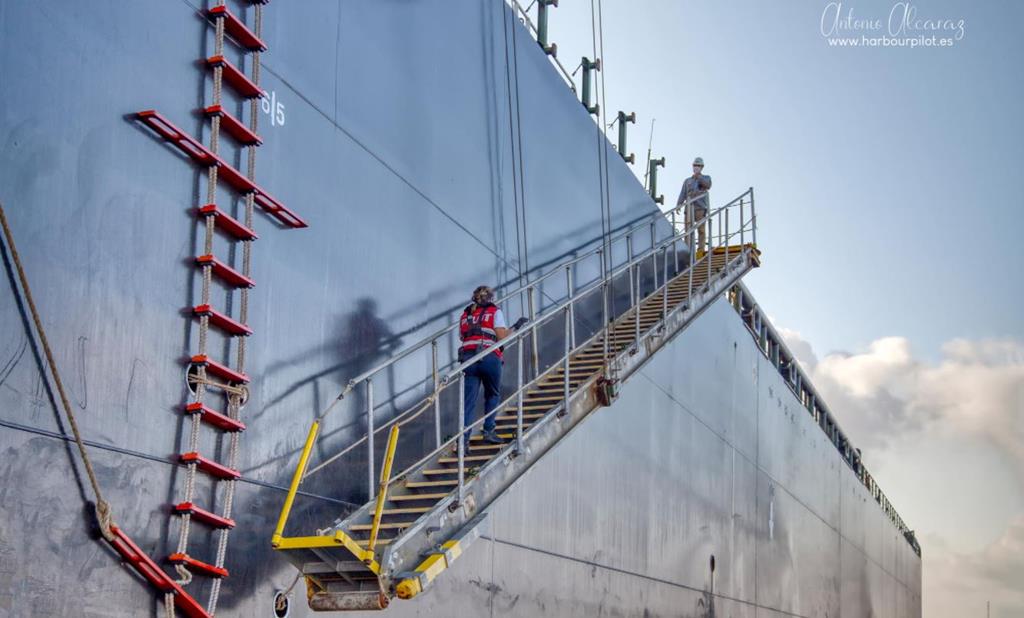 A bulk carrier in ballast was making way at 7 knots in a traffic separation scheme (TSS). The pilot ladder was being prepared on the port (lee) side by the Chief Officer along with the bosun and three other crew. As the vessel exceeded the 9m height criterion, the pilot ladder had to be rigged in conjunction with the accommodation ladder, located abreast of cargo hold no. 4. Since it was dark, the overside floodlight was switched on to permit the crew on deck to work safely.

The pilot ladder was lowered over the ship’s side and the accommodation ladder was swung out and rigged. The bosun went down the accommodation ladder to the lower platform to lash the pilot ladder to the ship’s hull. The vessel was experiencing rough seas with winds gusting at 50 knots and a wave height of between 2m and 3m. There was reportedly no rolling or pitching, but the bosun was not wearing a lifejacket nor was he secured by a safety line.

He then returned to the main deck, collected another rope and again descended the accommodation ladder to fasten the ladder platform to the pilot ladder. Soon after, a loud yell was heard from below. The bosun was seen in the water and the man overboard (MOB) alarm was raised. It was now 01.45.

A lifebuoy with a self-igniting light was thrown overboard immediately. A second lifebuoy with light was also released. Upon hearing the MOB alert, the OOW rushed to the port bridge wing and released the bridge wing lifebuoy. He then pressed the event key on the ECDIS as a reference point (MOB) on the chart. Meanwhile, the Master reduced speed, informed local VTS on the VHF and requested permission to turn the vessel back for rescue operations.

The general alarm was sounded and a MOB was announced through the public address system. Lookouts were posted on each side of the vessel and the rest of the crew members were mustered at the muster station. By 02.00, the vessel was on a reciprocal course of the TSS. Three lighted buoys were sighted but the crew members could not find the victim. After some searching, the Master made a request to VTS to arrange for local search and rescue units on scene and their vessel to return to an anchorage area so as not hamper navigation of other vessels in the TSS.

At 03.15, the local Coast Guard began search and rescue operations at the site of the MOB position. However, despite the rescue efforts of the Coast Guard, the victim was not found.

Lessons learned
Going down the accommodation ladder with neither lifevest nor safety line must have been based on similar, past, successful operations, which may have never been challenged on board. This ‘slippage’ in safety is a pernicious and common phenomenon.

Always use your common sense to question current work practices. Just because the task has always been done a certain way does not mean it is safe. Working over the side while underway is particularly fraught with danger. Yet, mariners have little choice when rigging the pilot combination ladder. This task needs safety barriers such as wearing a safety harness and a lifevest.

When there is a MOB situation, nothing is more important than finding the victim quickly. Other traffic in the area must give way, slow down or otherwise assist in the search.
What's your opinion on this?
Login or register to write comments and join the discussion!
Read more...

Video 2019: "Ever Given" Allided with Berthed Ferry "Finkenwerder" in Hamburg

On 9 February 2019, near the Port of Hamburg, the EVER GIVEN struck the 25-metre HADAG ferry Finkenwerder, moored at the Blankenese jetty, and severely damaged it. Two minutes after the collision, a ban was imposed on sailing on the Elbe due to strong winds.

Southampton, Hampshire. L/S of the ships and boats in a busy harbour. C/U shot of a nice looking old ship. Camera pans to a couple of little ships - tugs. M/S of one of the tugs "Flying Kestrel" with its Captain Collingwood observing. M/S of "Queen Elizabeth" - the largest passenger liner in the world. "Seven tugs go into action when "Queen Elizabeth" leaves Southampton" - tells a voiceover. M/S of Captain Collingwood giving instructions on the bridge of "Flying Kestrel". M/S of the tug...

Article Latest Edition of "The Pilot" by UKMPA released
105

Article A review of the ship’s pivot point: Science, Maths and Observation’ Where is the centre of a ship’s rotation?
34