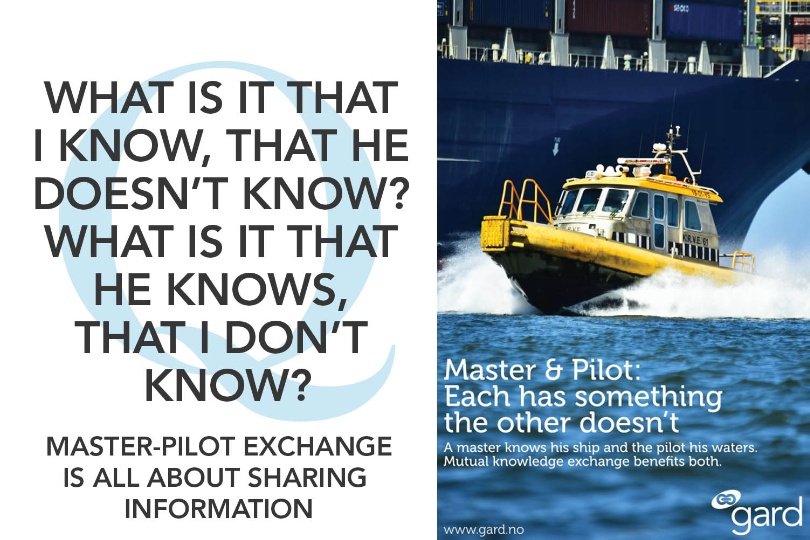 Article and text by Gard AS - www.gard.no

The playwright George Bernhard Shaw once said “the single biggest problem with communication is the illusion that it has taken place.” This phrase perfectly describes the central constraint preventing harmonized working between a pilot and Master – communication.

The Master and pilot are dependant on each other for a safe and successful beginning or end of a voyage. They are both operating in a foreign environment. The pilot is not familiar with the characteristics or limitations of the vessel, such as a problem with the anchor windlass or speed at various RPMs; and similarly the Master and his bridge team are not experts on the harbour, river or anchorage and may not be aware that a buoy is out of position or familiar with local currents.

To ensure they have similar expectations of the passage ahead and with no surprises occurring, the pilot and Master must share all the information they have in a formal master-pilot exchange. The onus is on the vessel to achieve this harmonization.

Case study for onboard safety meeting

Please read the below story of an incident. Keep our company’s standards and procedures
in mind while reading to compare with the actions of the crew below as we will discuss the
factors which led to the incident occurring.

We are on board a tanker, approaching a terminal somewhere in the Western Hemisphere. The speed is slowly increasing and the last light of day is rapidly disappearing. The pilot has just boarded the ship; one nautical mile closer to the breakwater entrance than the chartered boarding point. The atmosphere on the bridge is relaxed.

“Full speed, Mr Pilot, 14 knots.” “Full speed. Thank you, Capt.” The pilot and the master continue to talk about everyday matters such as the weather, how long they are staying at the berth, etc. “I’m leaving the bridge”, says the master. “I have to prepare some papers before we berth. The second mate will assist you. Here is the pilotcard. If you need me, just tell him and he will fetch me.”

The ship is still at full speed. The pilot calls the harbour master in his native language and tells him that ETA will be in 30 minutes. He also gives the three tugs waiting to assist berthing the ship an update on the situation (also in his native language). There is no request for translation from the second mate and the pilot does not share any information in English.

The ship continues at full ahead. Traffic increases as the ship enters sheltered waters. The background lights from the harbour area make it difficult to see the difference between moving and stationary objects.

“Mr Mate, can you prepare to receive the first tug on port bow? We will have starboard side alongside.” (Two other tugs are also ordered but this is not mentioned by the pilot). “Yes, sir”, says the mate. The pilot contacts the tugs on the VHF again (still in the local language) and, as he is talking, his mobile phone rings. The mate calls the master, who enters the bridge after a couple of minutes.

The Master consults the radar and although it is many years since the last time he was in this harbour, he feels somewhat uneasy with our present speed, as we are rapidly approaching the inner part of the harbour. The master is tempted to ask the pilot to reduce the speed, but for some reason he does not. The pilot orders half ahead and continues to talk in his mobile phone. We are approaching the berth and the master is more and more anxious about the speed, so he politely suggests the pilot to reduce the speed. The pilot explains that there is another ship waiting to leave the berth and he has to board it as soon as possible.

The first tug is closing in on port bow and is ready to receive the heaving line from the ship. The second mate, who has just left the bridge, is now on the forecastle making his first attempt at the heaving line, but misses the tug. He sees that they are now alarmingly close to the berth and hurries to do his second attempt. This time he succeeds and reports back to the bridge that the line from the tug is on board and secured. At the same time the pilot, who has just finished his telephone call, hectically instructing the tugs on how to berth the ship, still in the local language – this time with a raised voice.

The tugs seem to have problems keeping up with the speed of the ship and this is communicated to the pilot. The distance to the berth is rapidly decreasing and the pilot asks for slow astern. The master, who is now becoming very nervous, orders slow astern and even increases this to half astern. The pilot orders the aft tug to start pulling in order to reduce the speed of the ship. The master finally realises that there is no way he can avoid hitting the berth and orders full astern. The ship hits the berth with a speed of 2 knots, making a 3 metre long gash on the starboard bow and causing extensive damage to the berth.

How to improve by lessons learnt

Based on the case and the keywords, you should now perform an onboard risk assessment of the incident and the factors which led to it. Bear in mind our vessel’s procedures.

You can also discuss the keywords below in order to determine onboard areas/topics for increased awareness:
- Content of a proper Master – Pilot exchange of information. Is it only handing over the pilot card?
- Risk assessment and pilot boarding point, how does the risk change when pilot boards closer to berth
- Excessive speed –The importance of identifying the point-of-no-return in the planning
- When do you question or intervene when procedures are not followed?
- Roles and responsibilities when pilot is onboard. Who is the leader of the bridge team? Who is in command?
- Communication and language challenges, when do we ask the pilot to translate?
- Company policy – when is the use of mobile telephones appropriate or prohibited. Could we tell the pilot about this policy?

QUESTIONS
1 - What factors contributed to the incident in the above case?

2 - Risk Assessment: Could some of the factors identified be present on board your ship?
(How frequent could they be present? How severe could it be if they are present?)

3 - In the risk transfer zone (yellow and red), what would you suggest as measures to control the
risk? Any additional barriers that could be introduced?

If you have any questions or comments please contact Gard’s Loss Prevention team at lp@gard.no
Original article / casestudy on www.gard.no as PDF
Gard AS
Editor's note:
Opinion pieces reflect the personal opinion of individual authors. They do not allow any conclusions to be drawn about a prevailing opinion in the respective editorial department. Opinion pieces might be deliberately formulated in a pronounced or even explicit tone and may contain biased arguments. They might be intended to polarise and stimulate discussion. In this, they deliberately differ from the factual articles you typically find on this platform, written to present facts and opinions in as balanced a manner as possible.
What's your opinion on this?
Login or register to write comments and join the discussion!
Read more...

Opinion Pilotage And The 6 Deadly "I's"

Impatience is triggered when we have a set goal (for example berthing a vessel) but realise it's going to cost us more than we thought to reach it (the vessel is only making 6 knots against the tide and is taking much longer than predicted).

Article GPS interference and jamming on the increase

Ships have reported an increasing number of cases of significant GPS interference and jamming in recent months. The geographic areas with more than one reported incident include the eastern and central Mediterranean Sea, the Persian Gulf, and multiple Chinese ports.

Another very good explanatory video by Knud Benedict. Absolutely worth seeing.
Yaw Stability is an important element of Ships Manoeuvrability - both for course keeping and turning ability. This first video in a series explains the Basic Principles of stability in steady state equilibrium conditions and the forces / moments involved

Full title: "The Digital Transformation of Canadian Hydrographic Offices, and the Corresponding Contributions to Seabed 2030 and Lakebed 2030"
Presented at the Lakebed 2030 Conference in 2021
Get involved at Lakebed2030.org

Practical samples for manoeuvres for ships going astern - as Stern-First-Method SFM. Introduction using as sample from the Master Thesis by Karel Wiegert for an arrival manoeuvre of a cruise vessel in Southampton port with a Twin-screw vessel under strong current. The same manoeuvre with the same ship model was used to show the advantage of Fast Time Simulation FTS using the SAMMON Planning Tool. This goes much faster than the manoeuvres in the real time simulator - and it can even be...

Port Revel is a ship handling training center for pilots, captains and officers. Unique in its kind, it allows to acquire new skills, to improve on different manned models at scale 1 / 25th.

Since the Chesapeake class pilot boat was introduced by the Somerset, Mass., shipyard in 2003, 22 have been delivered to 12 pilot associations throughout the United States.