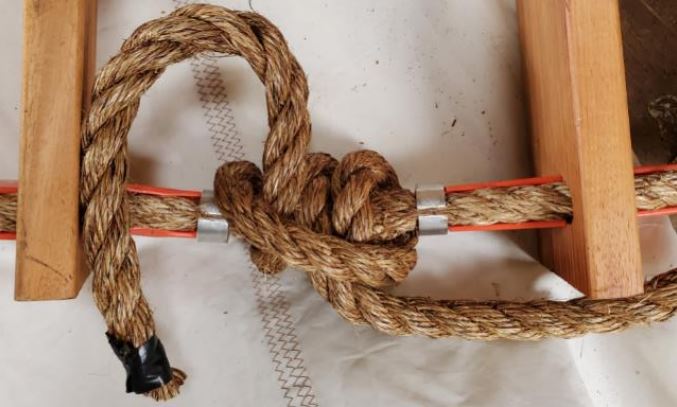 I decided to look into pilot ladder strength and intermediate securing arrangements after MNZ put out what I felt was a confusing and unclear document about securing of pilot ladders.

Update from 30.11.2020:
"I have reissued my report due to hearing that some are justifying their use of deck tongues with the results.
The report did not cover regular use and damage caused.
In my opinion, deck tongues are not a good method due to how the load is placed onto just the two crimps, whereas with lashing, the correct shackles for the ladder type or soft round endless slings all place load on the sideropes and 4 crimps.
The reason the deck tongue got a reasonable failure load is to do with inline transfer of load. Recent testing has shown distortion of ladders due to deck tongue securing at relatively low loads. Loose steps and lost wedges / widgets result. Would be interesting to see how often ships replace ladders and how they were secured."


Looking for information about why lashings were preferred got me nowhere; all sources just said they were best.
The discussions went along the line of the following:

Expert –“…….”
As you can see in the images the lashings are on the step fixtures.

So Rolling hitch lashings versus …. Choking shackles and other methods, and along with that the strength of ladders – are they as strong as some people think?

Some say traditional seamanship skills are disappearing / gone,
Or is it crew have found a “quicker” way of doing the job with other gear?

How to test?
Load / destruction test.
Where / how can I do that? In the Barn, certified load cell + hydraulic pulling ram system + testbed structure + assorted shackles + time + rope + ladders…. As another pilot says “Easy peasy”

Onto investigating intermediate securing methods and strengths of ladders.

To determine the actual strength of ladders top end securing was tested as well.

Average breaking strength of Manila rope used for lashings = 2516kg (24.67kN), samples were taken at random from the different parcels received from the supplier. Eyes were spliced in each end then tested to destruction.

Rolling hitch and other assorted knots
First step was to determine if lashings, in particular the rolling hitch, place any load on the crimps / step fixtures.

To determine if lashings would put load onto the fixtures a number of knots where tested on a mock siderope;

All the knots shifted more than 150mm with the manual load placed on them - this mean the knots would have slid onto the step fixtures.

All the knots shifted more than 150mm with the manual load placed on them - this mean the knots would have slid onto the step fixtures.
To make it clear - If the knots were tied onto a pilot ladder rather than a mock side rope with no step fixtures every single knot would have come up on the fixtures with less than 200kg load, nearly all with less than 100kg. In all tests using knots on actual ladders this was found to be true..

As a pilot climbs a ladder the load on either side of the ladder will alternate depending upon the climbing technique, so 100kg of force a side is not hard to achieve when including the ladder weight.

Chaff damage - Chaff on the mock side ropes ranged from minor to moderate or worse.

As it only takes the failure of one side of a ladder for a pilot to fall the majority of tests were carried out on one side only.

The following may affect the results:

Side rope with no fittings
Thimbles were used to allow for a better D/d1.

Sideropes with steps crimp / seizings and chocks/widgets
- a section of ladder was modified to have two tops so that the side ropes would be loadedand no load placed on any steps, chocks or crimps except by the sideropes

One side of a ladder loaded

One side of a ladder loaded

Both sides were loaded

Both sides were loaded

ResultTest 2:
Stopped test at 4800kg, after removing shackles noted that the holes had elongation of approx 1mm in all four side rope holes
Step strength – transverse - loading on tread
Remove side ropes from 2 steps - upper step is there as a spreader.
Fit synthetic line in place of sideropes.

Test 1 - Sling in centre of step - no spreading of load

Test 1 - Sling in centre of step - no spreading of load

Test 1 shows the likely strength of a wooden step if a pilot boat were to come down on one.
Test 3 shows the timber step strength when the step is used to secure the ladder - see results for deck tongue as these results cannot be used to justify a deck tongue setup due to the test not including conventional side ropes.

What proof load is required, looking back I found pilot hoists had to have an overload test of 2.2, below is some of the text from the old MNZ Part 53. Dutch rules are similar.

Being practical is a 407kg SWL / WWL acceptable for a pilot ladder:
What weight does a pilot ladder have to carry?
- itself…. (a 15m long pilot ladder weighs in at 100kg.)
- a pilot 150kg to allow for wallet (with pilots licence in), radio, small bag, wet weather gear (may be fitted with pockets to carry PPU), PPE (Incl Covid-19 gear).


THE FOLLOWING TESTS WERE CONDUCTED ON ONE SIDE OF A LADDER

Results so far…
The following graph uses a factor of 1.49 to convert one side results (light blue), into a calculated failure load for both sides (Purple), it also shows the avg for tests conducted with both sides at the same time (Grey).
The 1.49 comes from the ratios found with testing.

Note 1: have added calculated failure one side for deck tongue and double ended.
Note 2: In the case of the deck tongue tests the ladders would have been damaged beyond repair well before side rope failure occurred.

Note 1: have added calculated failure one side for deck tongue and double ended.
Note 2: In the case of the deck tongue tests the ladders would have been damaged beyond repair well before side rope failure occurred.
Sometimes the lashings using rolling hitches failed before the ladder did. All the other methods the
side ropes failed before the securing gear did.
The lashing either cut itself or it caused the side ropes to fail.

Strongest method?
Currently the strongest intermediate securing arrangement available that I have tested is to use soft round endless slings cow-hitched to the sideropes and shackled to strong points using tested shackles. See last page for photos.
2T WLL slings(14T MBL) with 6.5T WLL (MBL over 30T) green pin shackles were used in testing. The strength of these exceeds the strength requirements under the rules.
Strength of ladders
Average strength of ladders tested – 4110kg / 40.3kN
Would having a SWL make a difference?
Perhaps - it might mean that after a pilot boat snags a ladder it would have to be thoroughly inspected or tested?
Or maybe if ladders had a SWL of 407kg ship’s crew might take better care, pilot transfer vessels might just might get designed and driven with that in mind, after all a ladder is tested to 8.8kN, whatinsurance company would pay out on an equipment failure that occurs at a load beyond that whichthe equipment has been tested to?
Another possible intermediate securing method
There is presently a device under development, initial tests show that it is as strong as using slings, but it has the added benefit that it leaves a mark on the side ropes to show that over half a tonne has been applied to the side of the ladder it is securing – in other words if the side ropes have both got the marks then the ladder has been subjected to more than it has been tested to (8.8kN).

With limited resources and limited testing carried out, less than 300tests on 4 different makes of ladders, further testing may show differences. Very early testing showed choking shackles and lashings to be similar in strength, yet with further testing this has been found to be false.
Different shackles with different ladders brought different results – check with the ladder manufacturer.

Deck tongues – The use of deck tongues – note that the test results show seizings / crimps started to shift at loads as low as 300kg for older ladders and at around 1000kg for new. It appears deck tongues are practically guaranteed to shorten ladder life.

Fatigue testing should be carried out – I currently do not have the time or resources to do this though I do intend to continue testing methods that are currently in use and investigate alternatives, any assistance is appreciated.

Gear used for the intermediate securing of pilot ladders should be tested and certified.

Random knots tied with random offcuts of line - you would not secure cargo with them.

Sling cow-hitched to siderope with turns taken around shackle to shorten the sling:

Login or register to write comments and join the discussion!
SP
Sanjeev Pande Ocean Sparkle Limited, India
Troy, this upends what has been asserted by several other pilots. That securing a ladder at intermediate length can safely be done only using a rope lashing applied to the side ropes using a rolling hitch. From the several methods of securing tested by you, the "deck tongue" emerges as the least strong. And the endless soft sling the most strong.
What then of the advice being put forth by CHIRP and several P&I associations that have accepted "the rolling hitch lashing: as the only correct way to secure (for intermediate length ladders)?
0
JV
Jorge Viso American Pilots' Association, USA
Troy, this is important work you have initiated. Thank you.
0
Read more...

Article Pilot ladders - bits and pieces and a bit of testing

The following article appeared in AIMPA magazine number 2 about the strength and testing of pilot ladders : There is much more information about pilot ladders in the AIMPA magazine, second issue, if you wish to read more you can download a copy at the bottom of this post.

Video Pilots gets off Huron Belle Pilot boat and climbs aboard CSL Assiniboine - 08.04.19

"This is a Lakes Pilot hopping off the Huron Belle Pilot boat after we've pulled alongside the CSL Assiniboine on the Detroit River just above the Ambassador Bridge in Detroit, MI
He walks along the side of the Pilot boat, holding onto the railing and then after the gangway from the ship is lowered into position, he steps up and pulls himself up to then begin walking up the gangway to the deck where he is greeted by the crew.
We then see one of the crew from the Pilot boat tieing up the...