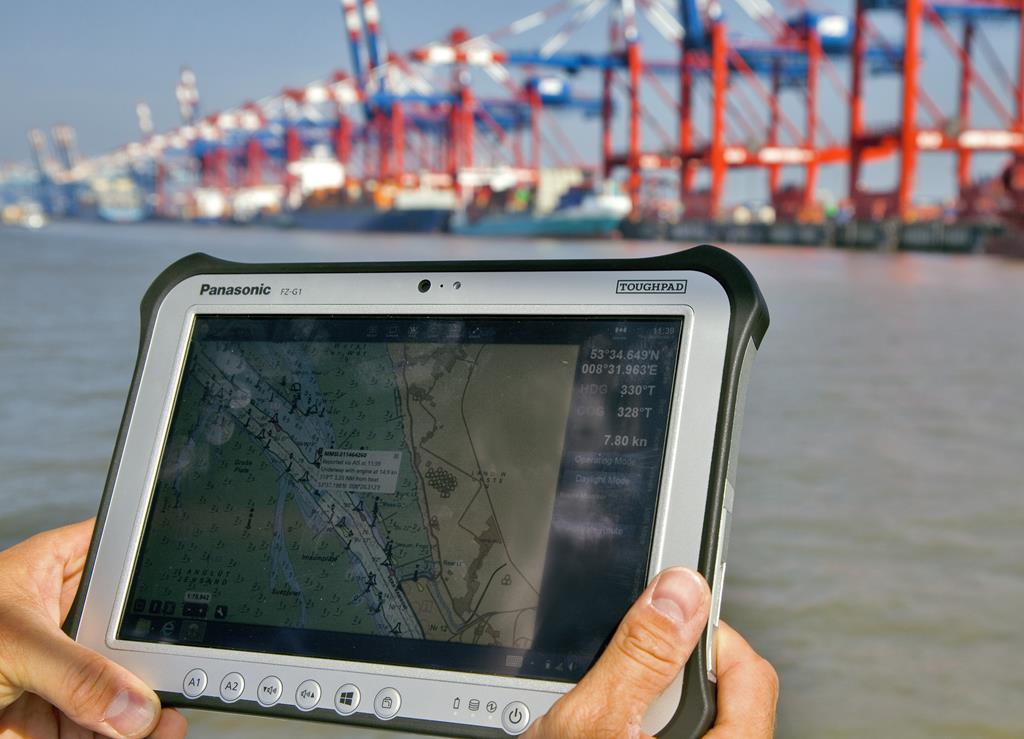 In 2010, German pilots launched the Pilot Information Assistant (PIA) project with the aim of searching for technical innovations that would support pilots' day-to-day work and increase safety on the seawater routes. The ambitious goal was, for the first time, to gather all 9 brotherhoods of the German sea and harbour pilots with their different needs and for a common and therefore uniform and above all cost-efficient development of a PIA information system and a corresponding so-called Portable Pilot Unit (PPU). The devices should not simply consist of a notebook or tablet PC, which represent the position of their own and the surrounding ships on an electronic nautical chart. The pilots needed more important additional functions via the originally defined rudimentary function of a PPU. The devices used today also have an extensive information and communication platform. As a consequence, the pilots explicitly designate their PPUs as "PIA devices" and no longer with the internationally accepted term "PPU", because the modern PIA devices can do much more.
So far, every single pilot got his information from many channels himself. They had to carry a lot of information such as pilot and port regulations with them in paper form. In the future, a software platform on the PIA device should automatically collect, process and electronically provide all relevant, and especially updated information, such as temporary nautical warning messages, to pilots from various channels. The PIA devices should also make the pilot more independent of the on-board ship electronics and sensors. As this varies in qualitative terms, the pilot now has his own independent system available to verify the information provided by the ship on the bridge and enrich it with their own data.

In the Autumn of 2011, the decision of the PIA Panel to implement the concept was submitted to the North German software service provider TRENZ AG. Its solutions based on its own development tool easyLogic was dedicated in terms of the speed and flexibility of software development. "For us pilots it was important to have a service provider who took up our ideas of a PIA solution, refined with its own ideas and IT know-how and consistently implemented software and solutions. As we often broke new ground and many approaches had to mature during development, a quick and easy prototyping was important. The willingness of our partner from the maritime information technology to help in the preparation of some ideas in order to convince the pilot associations of an implementation with a prototype was also helpful", Says Wolfgang Bülter, Managing Director of the Pilotage NOK II Kiel / Lübeck / Flensburg and head of the PIA working group.
The first PIA devices were delivered to the pilot association NOK II in Spring 2012 and the handling of devices and the associated software was tested in practice in the Kiel Canal (NOK). Here the first completely new and powerful tablet PCs (Samsung Slate PC-7) with Windows operating system were used. The hardware was supplemented by the possibility of data communication via mobile radio, a GPS mouse and a pilot plug. Through the pilot plug, the PIA device can be connected directly to the ship's electronics on the bridge to receive, process and visualize further information via Bluetooth.

The user interface of the PIA software has been kept as simple as possible. As a software developer, TRENZ AG relied on an independent interface that enables intuitive operation of the software for all user groups, regardless of whether they are tech-savvy or inexperienced. All controls are sufficiently large and coloured to ensure safer operation even in adverse conditions. Of course, the software offers a night view.
The software installed on the PIA device consists of an extensive communications platform that integrates not only electronic charts and a ship database but also an information system - with many electronic documents and up-to-date traffic and weather data. In this case, various data such as tides, water levels, current authority information or even lock waiting times are collected from a variety of sources and made available through a central server. The headquarters of the pilot associations also maintain some additional information manually in the system. Each PIA device is equipped with WLAN as well as an integrated SIM card for mobile communication. With an existing radio connection, the controller's device synchronizes all relevant information from the PIA server and makes it available both online and offline. Thus, the pilot with the PIA device always has all the data and information that is important for its piloting, even if there is no connection to the central server temporarily.

During the course of the project, the original Samsung Tablets among others, which were used initially, were replaced by Panasonic's ruggedized tablets (Toughpad G1), which better withstand the harsh operating conditions of heat, cold and moisture. The devices easily survive a drop of just over one metre in height during operation. In Panasonic, a dedicated hardware manufacturer was found, who always accompanied the project supportively. Positive for the cost of the PIA project is the fact that all pilot associations could agree on a device manufacturer with a choice of 2-3 devices. This streamlined the logistics process of procurement and, above all, the support of the PIA devices.

On the PIA devices comes either a navigation software from SevenCs, specially developed for the German pilots’ functions and even maps and software from the Nautical publications are used. Ship positions in the nautical chart are displayed via AIS over IP.

At the heart of the PIA information platform is a ship database, which currently contains information from approximately 17,000 ships. In addition to the electronic pilot card, this also includes detailed information on the number, performance and functionality of the various propulsion and manoeuvring systems on board. The constant maintenance of the data within the large community of German pilots ensures a good quality of information. If the PIA system detects the AIS signal of a hitherto unknown ship, it is automatically created in the database with all data to be determined autonomously by the PIA server and identified as a new data record for further processing.

In addition to the technical hurdles to be overcome in the context of such a project, there are always financial, legal, social and political tasks to master. The PIA project was launched with the ambitious goal to gather all 9 German pilot associations over time for a joint collaboration on the project. A uniform hardware and software platform that can be operated economically generates many synergies between the pilots.
Further expansion stages of the PIA system will follow in the future: Currently, TRENZ AG is working with some pilot associations on the development of an electronic pilot certificate, which contains all billing-relevant data of the pilot certificate, meets the documentation requirement and with electronic signatures on the PPU ensures legally secure and completely paperless processing. Immediately after signing, the electronic pilot certificate is made available for further paperless processing in the administration of the respective pilot association. The electronic certificate will be used in the first pilot association in 2014.

In addition, TRENZ AG works together with the German pilots on an ETA system, initially on the Kiel Canal and its inlets, which will be made available to the local pilots. Based on historical AIS data, the ETA system predicts the probable rates and speeds of the vessels in each pilotage area from the current AIS situation map depending on i.a. ship size, weather conditions and tidal times. The system uses different algorithms and a so-called neural, self-learning network. Thus, for several hours in advance, a forecast for the traffic, for example, at the locks of the NOK or the inlet of the Elbe can be made. Particularly problematic situations of encounter of large ships can thus be predicted and planned. The anticipated rates and ETA times of the vessels in the area are continuously updated in real time. The ETA system also provides a good basis for deciding on an optimal time window for sensitive manoeuvres, such as turning a large ship in the fairway, by pre-simulating a future traffic condition picture.

The PIA project of German pilots is a great maritime success story and ensures greater safety and efficiency on German shipping routes. Thus, with no exceptions, all of the approx. 890 German maritime and port traffic controllers could be gathered for use of the PIA system and its PPU. The entire maritime economy benefits by optimizing the interaction of individual ships. The increasing international interest in the system proves that the German pilots are using one of the world's leading systems for supporting pilotage, in whose development all pilot associations have played a significant role. In the next step, the exchange of data and information with other European pilots is conceivable for the future.


Ship&Offshore Website
What's your opinion on this?
Login or register to write comments and join the discussion!
Read more...

OPERATIONAL NOTES AND RECOMMENDATIONS by UKMPA, February 2017
The introduction of modern lightweight Portable Pilot Units (PPU) for use during pilotage has proved to be another major advance for pilotage operations worldwide.

In this video we show you the contents of the TRENZ Pilot Plug package.
Please visit https://trenz-pilotplug.com/ for more information.

Article Qastor 3 is now available - win a one year licence!

QPS is pleased to announce that Qastor 3 is now available on iOS and Windows.

This brand new version of Qastor is a multi functional navigation platform, which has been developed, designed and tested in cooperation with world-class pilots. Explore straightforward navigation software with optimal docking and piloting capabilities.

ChartWorld's Information Overlay+ service, CIO,+ builds on the success of our automated T&P NtM service launched last year. Additional features include safety and environmental overlays. CIO+ is the only service in the market which solves the problem of plotting missing T&P NMs into the ECDIS. CIO+ means that the T&P NM is already applied in a simple updated Chart

Follow me as I travel around the world working on a container ship!
The mega container ship is alongside Kaohsiung for one day, I had 8 hours off between my watch, so i took the opportunity to explore Kaohsiung, Taiwan. Brought along my drone to take some shots at the beautiful architecture that Taiwan has to offer.

This Notice documents the results of the Concentrated Inspection Campaign (CIC) on Pilot Transfer Arrangements, which was carried out by the Bahamas Maritime Authority Inspectors and vessel staff between 01 July and 31 December 2021.