A report on AIMPA’s Webinar on “Reconceptualising Indian Maritime Pilotage” 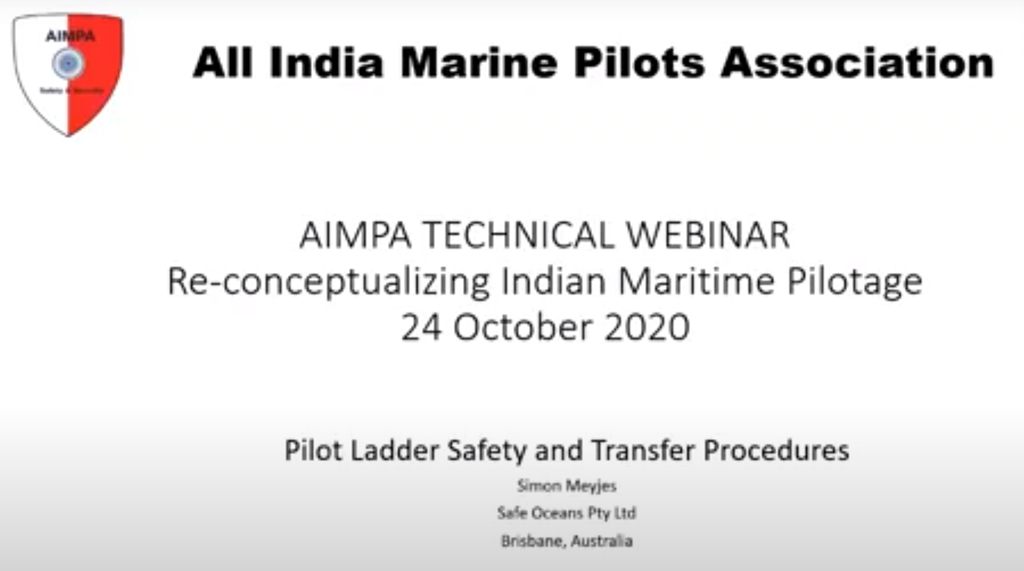 The proceedings concluded with Capt Nambiar giving a special thanks to – Media partners M/s Bhandarkar Publications and Marex for their wonderful support.

Last, therefore most important, the fraternity of all the attendees and viewers – both students, maritime training institute faculty, practicing professionals and seniors.

This is summary of some of the takeaways:


1st session:
1. Enhance the pilot’s profile in a port’s organisation,
2. Include pilot ladders in local regulations of ports (Dock worker’s regulations? To give it statutory force of law like how Ravi Nijjer said they did in Australia?)
3. Pilot boat design and construction to be safer and more standardised.
4. Improvements in pilot boat crew training
5. Uniform procedures for Pilot boarding, pilot communications are main areas which need to be improved.

2nd session:
1. Training procedures to be reviewed and refresher training to be included for pilots.
2. Improvised training of Maritime pilots is must through programs like Manned scaed model training, Such facility does not exist in India.
3. Incident reporting must be undertaken by all maritime Pilots
4. Play an enabling role in bringing about pilot training system as envisaged by Capt Karkare as per the efforts he had some years earlier along with Capt Saggi and others
5. CPD for pilots to be sought.

Video: AIMPA’s Webinar on “Reconceptualising Indian Maritime Pilotage" on 24th Oct 2020.
Editor's note:
Opinion pieces reflect the personal opinion of individual authors. They do not allow any conclusions to be drawn about a prevailing opinion in the respective editorial department. Opinion pieces might be deliberately formulated in a pronounced or even explicit tone and may contain biased arguments. They might be intended to polarise and stimulate discussion. In this, they deliberately differ from the factual articles you typically find on this platform, written to present facts and opinions in as balanced a manner as possible.
What's your opinion on this?
Login or register to write comments and join the discussion!
Read more...

The need to hold such a webinar was felt from the interaction over several months of AIMPA members through its President, Capt. Gajanan Karanjikar, with Capt Simon Meyjes and Capt.Ravi Nijjer - both instrumental in the thorough upgrade of pilotage operations Safety management systems in parts of Australia. From these interactions, AIMPA has come to the firm conclusion that a thorough upgrade of maritime pilotage management systems in India is necessary. Holding a webinar would be a good...

Marine-Pilots.com has launched a new function for registered users today. From now you can tag articles and videos as favorites or sort them in personal libraries that can be created individually.

The debate is whether highly skilled pilots could have successfully overcome the recent Boeing 737 MAX computer deficiencies. Will this question eventually be relevant to harbor pilot skills?