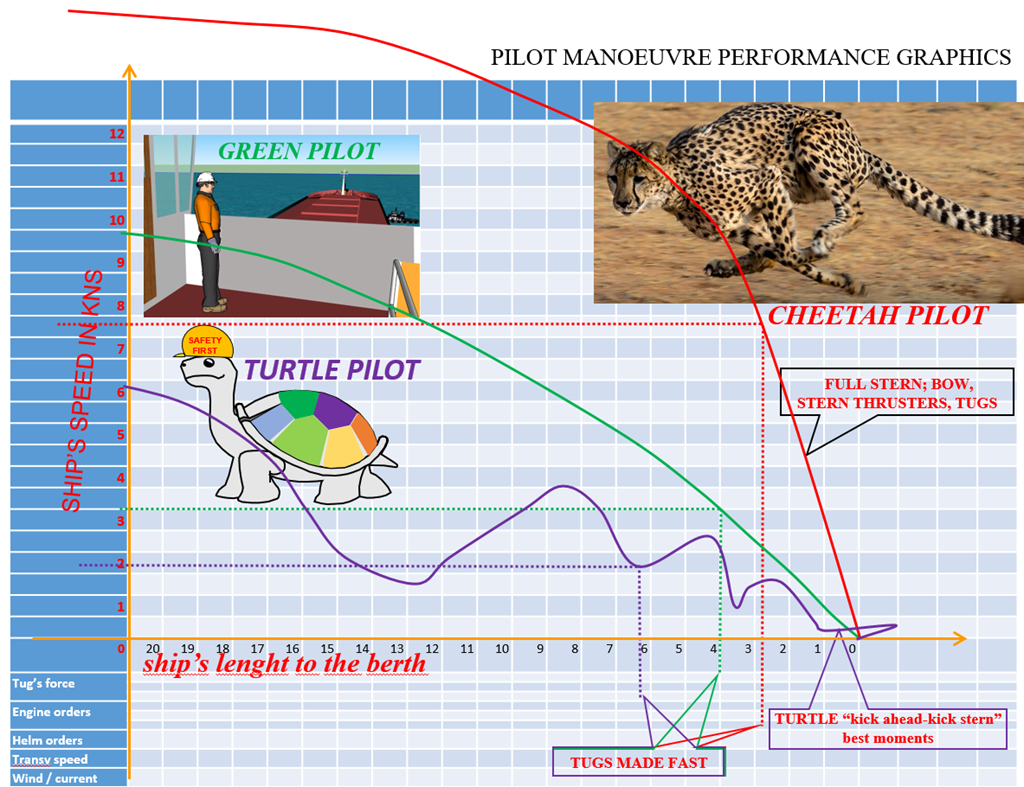 When I was deck officer sailing a coastal tanker, my ship embarked the same pilot in several manoeuvres.
Our captain ordered the bridge team to adopt above-normal alertness and readiness to assist the pilots we considered an outlier.
Now that I am a pilot, I know that I will be rated at the debriefing meeting regarding my work, as soon as I disembark.
The bridge team and the captain will adjust their safety envelope for the next manoeuvre, according to my performance.
The captain frequents several ports. Many pilots assist him. Adopting precautionary measures is the best method to avoid unpleasant surprises before the domino’s row of the error chain starts to fall. We can group the pilots into three generic teams, considering the graph of speed of approaching against the number of ship's lengths to the berth (see graph):

‘CHEETAHS’ masters the art of shiphandling very easily; however, they follow a method that stimulates the domino line to swing dangerously during various phases of the navigation and manoeuvring. The beginning of a chain of errors always seems to be near.

The captain and the bridge team must be on the state o alertness when the CHEETAH PILOT embarks because he is in a hurry. A big hurry. During navigation, he does not refuse any opportunity to overtake. His name is number one on bunker barges’ black list because the wave wash effect of his ship passes by requires additional reinforcement in their mooring to avoid breaking the lines. Small fishing boats tied to fragile wharves are hurled violently at each other and at the fenders. Damage may be reported. We are now less than four ship's lengths from the berth, at the rendezvous point with the tugs. The vessel arrives above the recommended speed for making fast. He pushes the tugs to make fast the towing lines quickly. The tugs make fast the towing lines between three and two ship's lengths from the berth with great effort and at unnecessary risk. After the tugs are made fast, the adventure continues. The speed is above what is reasonable.
We are about two ship's lengths from the berth. The captain interferes energetically, pointing out that five knots is a dangerous speed.

Our CHEETAH PILOT agrees to stop the engine. But the captain reinforces that this is not enough. The speed remains high. Then, the final stage of the scares continues when the CHEETAH orders engine full stern! A sequence of black smoke rings mixed with fireballs come out of the funnel. Bow and stern thrusters are working full power. The vessel vibrates violently and looks like it's going to break apart. Tugs are pulling with maximum power. Their towing lines are working close to the breaking limits. Then everything stops - and the ship fits precisely in the location requested by the terminal.
The manoeuvre is very fast, despite the fright of the captain, tugs and the terminal mooring team.

This other rare species adopts a manoeuvring method that is opposite to that of the CHEETAH PILOT.
About twenty ship's lengths from the berth he reduces the speed to six knots, despite the current and wind against the vessel. He always repeats "safety first" after some orders with a close look at the captain in search of any sign of approval.
Overtaking, no way. Even if it is allowed, safe, or there is ample time and space.
No movement that requires increasing speed, even in a leg without course changing, does not go through the filter of his "safety first" obsession. The meeting point with the tugs and making them fast takes place before six ship's lengths from the berth at a speed close to zero. Safety first! Safety first!

He always requests an extra active escort tug at the centre lead aft, just in case. After a while, the captain argues that the speed of approaching around one knot for each ship length is reasonable and safe, considering three active escort tugs, bow thruster, stern thruster, two anchors ready to let go, lack of traffic, and wind and current very weak against the vessel. The TURTLE might give in momentarily, although with a concerned look, making it clear that he prefers slower.
At four ship lengths from the berth, the "safety first" craze strikes again. The TURTLE reduces the speed of the vessel to less than two knots and continues to slow down.

Once in the vicinity of the berth, in the middle of the channel, almost stopped and out of position, the TURTLE orders a sequence of "kick ahead" and "kick stern" manoeuvres, keeping the engine team on alert. Later, he begins pushing the vessel against the fenders out of position. The kick ahead-kick stern dance continues, until finally reaching the position with partial help from the ship's fore and aft winches. At the end of the mooring, the TURTLE looks tired. The manoeuvre was far beyond a reasonable risk to manage.

Indeed, as a child, these individuals already manoeuvre toy ships in the bathtub. Then, most likely, they were enrolled in the kid's sailing school. Did their family have a boat? Either way, for the GREEN PILOTs, everything is similar to those early afternoons sailing at the yacht club. But Instead of sail they have now thousands KWs of propulsion, special rudders, several IMO certified instrument panels, bow thrusters, stern thrusters and tugs at their command. They are happy. Everything is straightforward.

Nowadays, they have continuous improvement and thousands of manoeuvres developing both practice and theory. They are a powerful tool to enhance safety and productivity in port operations. They seem to have the full grasp of the situation.
When the green pilot arrives on the bridge, it is clear to the captain and bridge team that the pilot has a checklist according IMO RES. A960 recommendation.

The captain and the bridge team are encouraged to cooperate in an organized and methodical manner. Each step follows a standard operational procedure discussed in advance. The contingency plan is always pointing out when crossing the references. Wheel over points are advanced or delayed according to the drift induced by environmental conditions. The GREEN PILOTS adjust a safe rate of turn applying small rudder angles. Course changes are smooth and precise.
The final leg follows the pattern of one knot of speed for each ship’s length to the berth. The manoeuvre of making fast the tugs towing lines is visually monitored and executed at speed in the water of less than four knots. The ship's engine stops before reaching the berth and is no longer required. Engine stern is rarely needed.

The final approach carries out and takes advantage of the ship's inertia and the prevailing environmental conditions.
At the position, the ship is pushed parallel to the line of the fenders with transversal speed between 0.1 and 0.2 knots, touching smoothly. GREEN PILOTS believe that the sensitive marine environment around is a place of fun, work and home for them and the dolphins and sea lions. They avoid requiring the thousands KWs power of the ship's engine for positioning, concerned with the carbon footprint of the manoeuvre. Instead, they use the azimuth characteristics of the ASD tugs to allocate the vessel in the final position. They hold the ship firmly against the fenders, with engine and thrusters stopped, before ordering the first lines ashore. At the end of the manoeuvre, the captain usually asks: - "Are you the one who comes to manoeuvre our ship on departure?".

Of course, there are lots of different pilots, for example, CHAMELEON PILOT; COYOTE PILOT; CONCERT-PIANIST-SHIPHANDLER PILOT; TROUBLESOME PILOT; PPU PILOT; PIANC LITE PILOT; PIANC RIGID PILOT – and many more, but this is another issue.

DISCLAIMER: The above article is just a joke involving technical matters. Any resemblance to real people and situations is just a brutal coincidence.
CAPTAIN REGINALDO PANTOJA – RIO GRANDE PILOT- BRAZIL

Captain Jim Mackelvie Atlantic Pilotage Authority, Canada
I’m sure the PIANC Lite Pilots would be quick to point out that according to PIANC a vessel can ‘float’ in a certain amount of underkeel mud.
0
Read more...

Time Lapse Video:The deep draught VLCC PISCES STAR is approaching the Port of Rotterdam, after navigating through the Eurogeul and Maasgeul deep water channels in the Southern North Sea. The VLCC is proceeding in Calandkanaal channel to her berth in the Petroleumharbour No. 5.
Before coming alongside the VLCC is stopped and swung in the channel. Four harbour tugs are made fast to assist the manoeuvring vessel. Mooringboats bring the VLCC's steel mooring wires ashore when she is coming...

Transnet National Ports Authority’s (TNPA) Port of Ngqura customers can count on experienced piloting services when their vessels are being moved in and out of the port. Ngqura boasts the services of Marine Pilot Ziggy (Siegfried) Duwe (62), who has achieved more than 4,000 ship movements in the last 12 years. He is the first pilot with this accomplishment in Algoa Bay, according to company records.