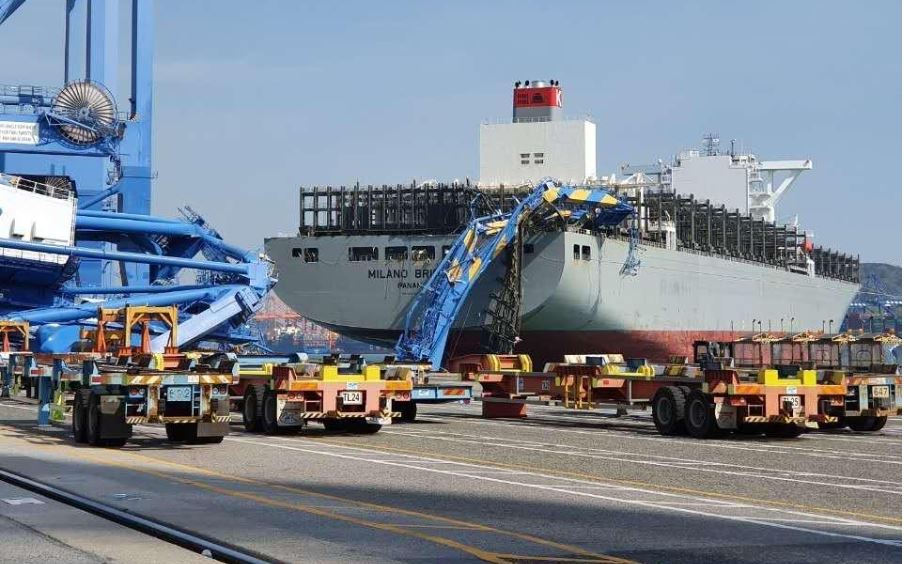 The report confirms that the accident caused by excessive speed during manoeuvring and the underestimated effects of the ship in ballast, such as partially submerged propellers and rudder blades with limited manoeuvrability, are considered to be the causes of this serious accident when berthing with a destroyed gantry crane.

The MOF’s Korean Maritime Safety Tribunal’s (KMST) investigations showed that Milano Bridge entered the port with about one-third of its propeller exposed above the water surface because it was not carrying sufficient ballast water. Milano Bridge was ballasting at the time, having departed from Zhoushan DDW PaxOcean Shipyard in China, after undergoing repairs.

KMST noted that Milano Bridge sailed towards the pier at a speed of 8 knots, which was higher than the usual speed of 6 knots when berthing. Wind speed at the time was 5 to 8 metres per second, which is considered normal.

KMST also calculated that the accident could have been avoided if Milano Bridge had slowed to less than 7 knots when approaching the pier.

Original Article by "Safety at sea"

Login or register to write comments and join the discussion!
MR
Merv Rowlinson United Kingdom
Hi Manjit:
Milano Bridge - the "Timeline" refers to a head tug as well as a stern tug!. What do you think? Given the speed of the vessel on approach I think that attaching the head tug would have been precarious!

I look forward to hearing from you.
Regards,
Dr. Merv Rowlinson
Southampton

[show more]
0
MH
Manjit Handa Australia
The ship had only one tug in attendance. ( It appears that the second tug in the background was attending the vessel at berth ahead.)
That is rather odd, isn't it? Such a high windage area and only one tug? No surprise then that the only tug was unable to arrest the vessel's transverse speed.
0
Read more...

According to AIS past track data, the vessel was obviously too fast on 9 knots and also going down the wind (4-5 bft., take a look at the exhaust from the stack) when entered the inner harbour considering the size and displacement. That speed was approximate 3 ship lengths to the pier and there was the on pier wind after the turn. Why the ship entered the port so fast will be the subject of the investigations to be awaited. Knowing South Korea procedures there will be no just marine...

The Port of Banten is an exciting addition to Innovez One’s global roster of ports. It is the 4th port in Indonesia alone to adopt marineM, Innovez One’s cutting-edge digital solution to optimise its towage and pilotage operations.

Tero Vainio has been appointed Finnpilot's Chief Technology Officer CTO). He will take up his position on 4 January 2021.

Opinion Pilots are not Advisors to Masters

This article was first published back in February 2022: According to the International Group of P & I Clubs’ “Report on P&I claims involving vessels under pilotage 1999-2019”, over the last twenty years, there were 1,046 incidents in which pilot error either caused or contributed to those events.

Sustainability concerns us all. PTR Holland (c), as a leading manufacturer of pilot and embarking ladders, is committed not only to produce the safest ladders, but also to protect our planet earth through sustainable production. PTR does so by sourcing the timber for the production of the ladders exclusively in accordance with the Federal Stewardship Council (FSC). Look for the FSC logo when buying your ladder. Take responsibility and protect our valuable rainforest! PTR Holland - Often...