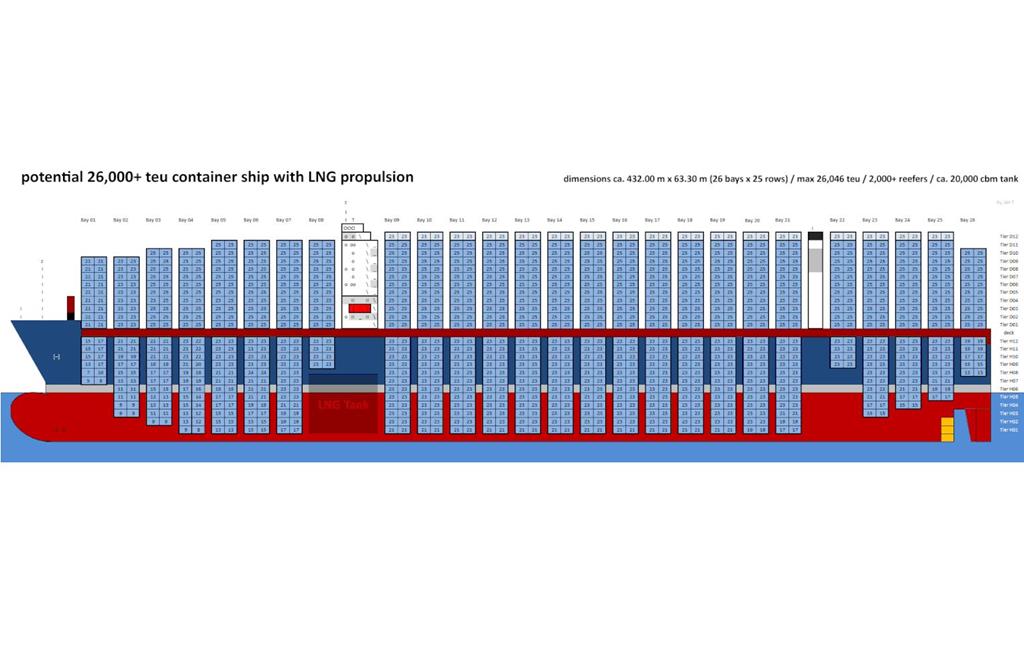 Comment by Frank Diegel:
The last month Jan Tiedemann from Alphaliner (BRS) in Hamburg has reported, that DNV GL has awarded Hudong Zhonghua Shipbuilding (group) Co., Ltd. an approval in principle for the design of an LNG-powered 25,000 TEU container vessel. Based upon the reported vessel dimensions, he reckons that the ship could actually have a capacity closer to 26,000 TEU. Have a look at his rough calculation and his graphic.
Container ships grow with each new order and there seems to be no upper limit, although there are more and more critical voices concerning this development. Every quarter the shipping companies outbid each other with new records in the size of their ships, their cargo capacities and the volume of containers transported. It is easy to lose track of who is the current leader in a particular discipline.

The pressure on shipping companies to cut costs pushes this development
The main reason for the growth of ships is economic pressure: fuel costs and fierce competition between shipping companies give an advantage to those who are able to transport containers at the lowest cost with the largest ship.
The world's largest container ships are currently over 400 metres long and can carry well over 20,000 TEU. And more and more giants are being added. Especially on the intercontinental trade routes between Europe and East Asia, the use of ever larger ships is profitable due to the large cargo volumes.

But where will this lead us in shipping? Where will this development end?
Fact is, that there will be a shift in transport costs from sea to land. The shipping companies are saving costs by operating ever larger ships, while on land more and more investment must be made to server infrastructure. These are among others:
- Lower access routes and berths for ships
- Larger cranes
- Larger intermediate storage areas
- Larger transport capacities to the hinterland by truck, train or inland waterway vessel

Some ports have already introduced a size limit for ships because they are no longer wanting to take part in this rat race. In addition to exploding investment in land-based infrastructure to cope with the ever-growing number of containers per ship during a port call, environmental and port safety aspects are also playing an increasingly important role.

Impact on Maritime Pilots
The handling of the ship giants is becoming more and more difficult with masses over 200,000 tons. The area exposed to the wind and the ever-increasing draught of the ships with ever-increasing dimensions make safe manoeuvring in existing harbours and their access routes riskier.

Effects on port operators
The port operators have the investments described above because the existing - often still very modern - infrastructure can no longer cope with the size of the new ships. The punctual strain on ports is increasing, as a single ship moves an ever-larger volume of containers per port call, which must also be managed in the short time span in the port.

Effects on vessel insurers
The cost risk of a single ship accident rises. The complete loss of ship and cargo alone, without taking into account consequential damage to the environment, an infrastructure, an accident partner or liability for consequential damage in the logistics chain, can cause losses in the high 3-digit million-dollar range. Under certain circumstances, the limit of 1 billion dollars in damage can be exceeded. This does not make insurers feel comfortable.

Conclusion and discussion
Personally, I am taking a critical view of future ship sizes, especially regarding the rising costs at land and the growing safety risk. But this might be only a conservative view of a European with the existing infrastructure here and the growing environmental awareness of the European population.

Many thanks to Jan Tiedemann for the impulse and the great graphics to this article. I did not illuminate all the stakeholders: How do shipbuilders or tug captains see it, for example?

I like to receive numerous comments and opinions from various stakeholders on the increasing ship sizes and the associated changes for shipping.

Article "The 20,000 TEU Club" - The fleet of the largest container vessels.

International Maritime Pilots' Association (IMPA) received the 2022 SAFETY4SEA Initiative Award for conducting annually its ‘Pilot Ladder Safety Campaign’ with the objective of reporting pilots’ experiences of ladders and boarding equipment to the IMO and the wider shipping community. Other distinguished short-listed nominees of this category were: Inmarsat, International Marine Contractors Association (IMCA), Safetytech Accelerator and Seafarers Hospital Society. We are honored to be...

The Chinese container freighter "CSCL Star" belongs to the class of Ultra Large Container Ships (ULCS) and is one of the largest ships that can enter the port of Hamburg.

AIMPA in association with IMU has organized a Research Paper Competition (SAMIPTA) for cadets of MTI from all disciplines on Pilot ladder risk mitigation and suggest innovative measures to Mitigate risks.

Opinion What is a Tug's Bollard Pull and How İt is Calculated?
191

Article USCG: Ever Forward pilot was distracted before grounding
162