Effects of the Chinese New Year on the global ship traffic 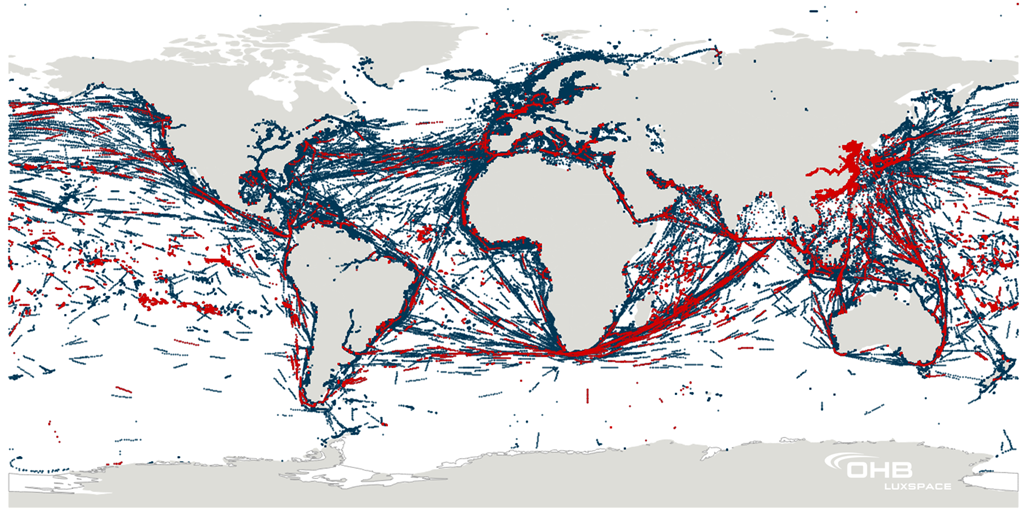 This year, the Chinese New Year holiday celebrates the year of the Rat. The Chinese New Year, also known as the Spring Festival or Lunar New Year is celebrated by more than 20% of the world’s population. More than that, it is also the longest seasonal holiday in China. Most of the population saves up its annual holidays to take a few weeks off and spend time with the family. It is celebrated by Chinese all over the world making the mark of the beginning of Spring enjoyable events in cities as Sydney, London or San Francisco. The holiday spreads far outside mainland China, and its effects are notable in other countries with large Chinese populations, including Indonesia, Singapore, Malaysia, South Korea, and the Philippines.

With China being the second largest economy in the world and export world champion in 2018 the economic effects are tangible. Quiet markets, due to the closure of stock markets in Hong Kong, Shanghai, Singapore and elsewhere, and a drop in production rates and global trade volumes are measurable effects. A repeating nightmare for retailers and importers all over the 7 Seas who rely on Chinese productions. Shipping companies warn customers that China's transport and logistics networks are at capacity and their shipments must be at ports two weeks ahead of the holiday to stand a chance of getting on a boat before the country shuts down.

Knowing this, I was curious to find out if we see a remarkable effect of the CNY within our AIS data. First, I wanted to check if there is any trend of one kind or another on the global ship movements. So, I decided to have a look at the data from recent years. As an example here, I show you the number of unique MMSIs reporting several times a day before, during and after the CNY in 2018 and 2019. 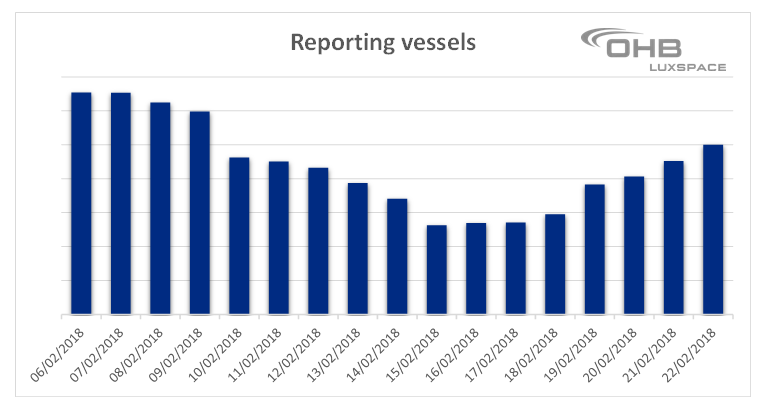 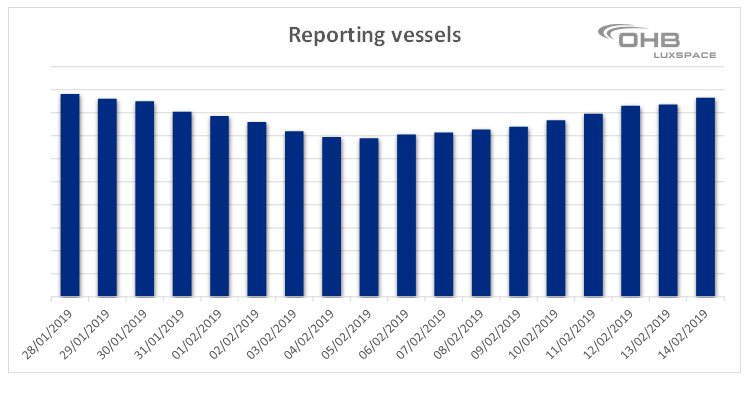 In both years one sees a clear trend: Two weeks before CNY, the number of reporting vessels starts to drop having its lowest point on the day of the respective Chinese New Year (As the Chinese year follows a lunisolar calendar, the beginning of the New Year moves accordingly). After that, the number of reporting vessels is going “back to normal”. This decline corresponds to 80 % of vessels flying under Chinese flag, according to our AIS data. An interesting side note is, that China operates the largest fleets of vessels in the world which have the obligation to report via AIS according to IMO. This becomes apparent, when looking at the graph below. The red markers resemble position reports from Chinese vessels, the markers in dark blue are position reports from vessels under any other flag state. 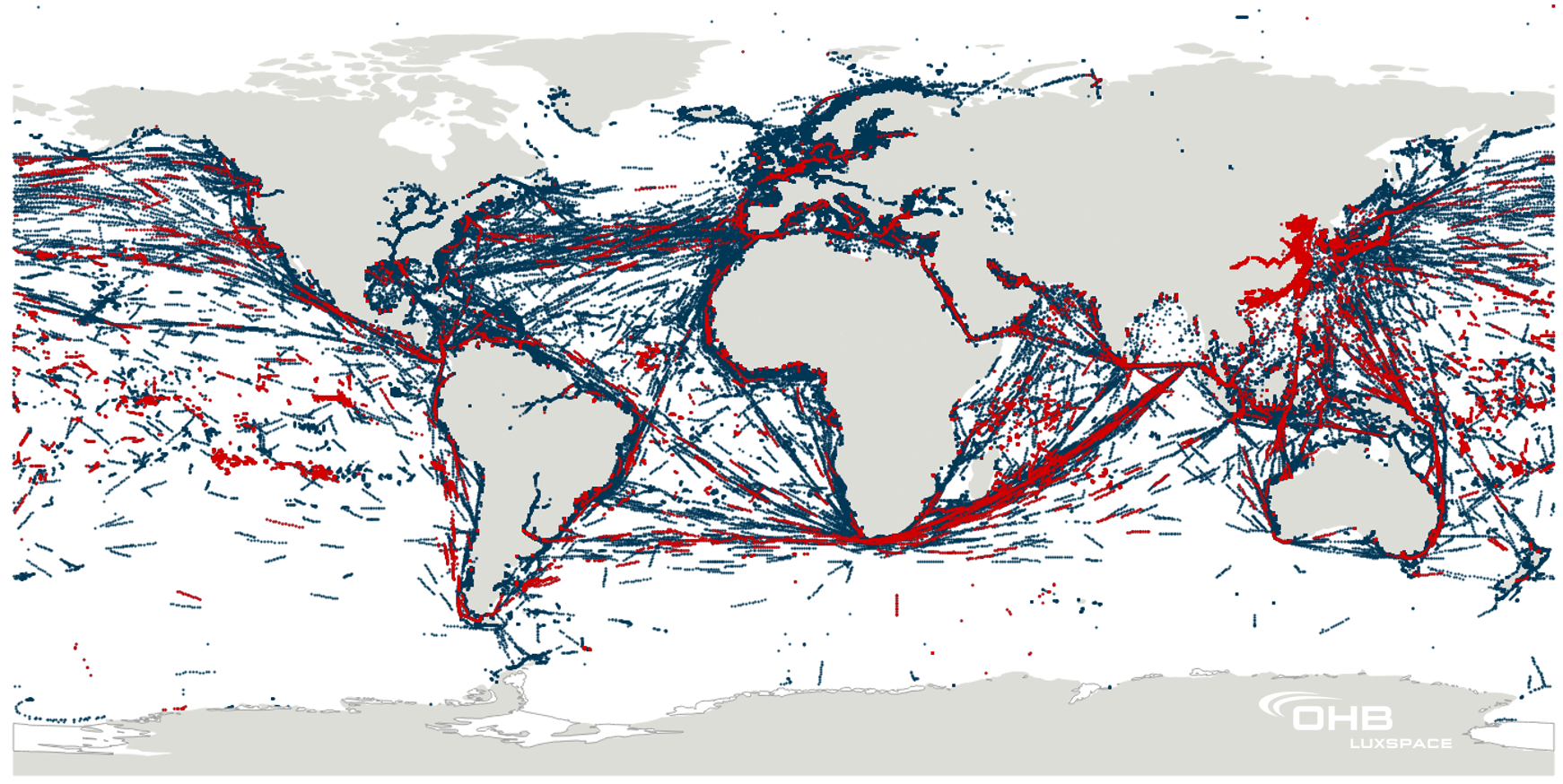 In the past couple of days, the number of Chinese vessels reporting dropped again, with the 25th of January being this year’s highlight of the festivities.
China is often called “the middle Kingdom”. To me, this saying gets a new turn when I look again at the map from above. China might not be in the middle of this world map, but it is right in the middle of the world’s economy.

written by Simone Moser, Project Manager for Satellite Services and Application at LuxSpace Sarl
More about LuxSpace and AIS

LuxSpace Sàrl
What's your opinion on this?
Login or register to write comments and join the discussion!
Read more...

The PDF of the second issue is available for download here

All India Marine Pilot Association has been formed by a Group of Mariners who care for "safety and security" of the Marine Pilots. Although a lot of our Indian seafarers felt the dire need of such a body, it was only after the unfortunate and untimely demise of Capt V P Gupta following his fall from the ladder on 8th August 2019, that pilots and like-minded individuals started expressing their displeasure about the 'Eco-system'. Capt. Virendra Mishra, C.E.O., The Shipping Tribune, had the...