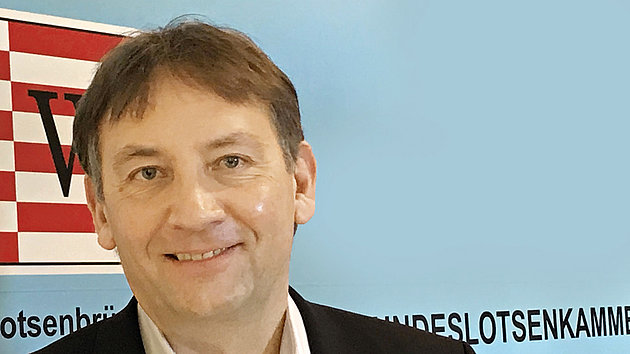 The chairman of the Federal Chamber of Pilots in Hamburg since summer 2018, was elected to head this association at EMPA's general meeting last week, for a period of three years. He follows Norwegian Stein Inge Dahn, who had held the office since 2013.

This year's EMPA General Meeting was also influenced by the Corona virus. Dalege: "The General Meeting normally takes place in Brussels, the headquarters of EMPA, or in one of the member countries of EMPA, on an annual basis. The procedure also includes what is called "social events". It's simply about the colleagues from the different countries getting to know each other personally. This strengthens team building among colleagues."

Dalege is proud to be head of EMPA at a time when the maritime industry is facing many major challenges. One keyword here is also: Corona. Dalege continues: "Europe's pilots have proven time and again over the past months that they are capable of maintaining the constant availability of the pilotage system even under difficult conditions. They have thus made a decisive contribution to maintaining supply chains."

Among the important tasks in the coming months, Dalege mentions "continuing the excellent work of my predecessor in terms of public awareness", but also "maintaining unity among pilots" and also "modernising the communication channels in European pilotage".

Founded in 1963, EMPA represents the interests of currently around 4,500 European sea and harbor pilots towards the European administrative authorities, the European Commission (EU) and the European Parliament (EP). The pilots are spread over 19 European countries and five neighbouring countries.

The first trip of Captain Erik Dalege, the new President of EMPA - European Maritime Pilots' Association, is in Italy. In recent days, at the Rome offices, he met with the top management of Fedepiloti is Italian.

At the end of the year and before Christmas, we were able to find a variety of offers for pilots who would like to change in the coming year.

Bulk carrier COFCO 1 with 41,900 tons of soybean resumed sailing downstream after grounding, which took place on May 25-26, but at around 0630 UTC May 27 she ran aground again, this time in San Pedro area at 269 kilometer mark, Parana river.

In March the Slovenian Government has concluded a contract with the state-owned Kopp Izobraževanje company to provide maritime piloting services in the port of Koper as a public service. So far these services have been provided by private company Piloti Koper.