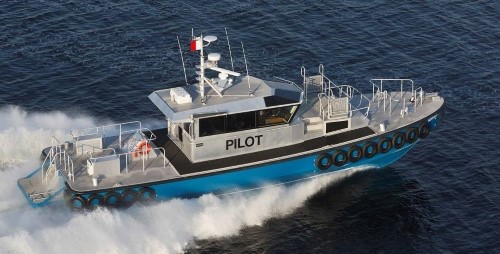 The Savannah Pilots Association of Georgia received a brand-new aluminium pilot boat from Snow and Company, a Washington-based boat-builder. The single-chine, flush-deck Savannah was created by the UK-based naval design firm Camarc. Its dimensions are 64 feet (19.5 metres) in length, 19.5 feet (5.9 metres) in beam, 3.63 feet (1.1 metres) in full load draught, 51 tonnes (46.2 tonnes), with seats for two crew and seven pilots.

Aluminium boats have excellent corrosion resistance, making them suited for fresh and saltwater conditions. Aluminium is the best material for shipbuilding. It is also favoured for marine applications like military patrol boats and fast ferries.

The boat can travel up to 35 knots thanks to two MTU 12V2000M86 engines that power Hamilton HTX52 waterjets through ZF 3055 gearboxes. Fuel tanks with a combined capacity of 1,200 litres supply the engines (4,540 litres).

The deck and the hull of the boat are also constructed using aluminium. Based at its own name-giving port, Savannah will support ships travelling more than 25 miles (40 kilometres) along the Savannah River between the port and the Atlantic Ocean's entrance. The new build is the third pilot boat of Camarc's design that the same operator has received. The Savannah Pilots are expected to get a second vessel from the same series in the fourth quarter of 2022. The operational service lifetimes of both vessels were designed to be greater than 20 years.
Pilot organisation: Savannah Pilots Association
Snow & Company
What's your opinion on this?
Login or register to write comments and join the discussion!
Read more...

by Marine-Pilots.com - published on 8 September 2020

The Marine Accident Investigation Branch (MAIB) examines and investigates all types of marine accidents to or on board UK vessels worldwide, and other vessels in UK territorial waters. Here is the annual report of 2020.

A Japanese bulk carrier that has spilled more than 1,000 tons of oil since running aground off the coast of Mauritius has broken in two. Officials said the split was caused by a crack in a cargo hold, after the ship's condition deteriorated severely overnight. Emergency teams and thousands of volunteers have been racing to siphon off remaining fuel on board the ship.

This video explains what is a Marine Notice and discusses the recently issued (2019) marine notice regarding pilot transfer arrangements.
Mariners appearing for oral examinations will benefit from watching this video.