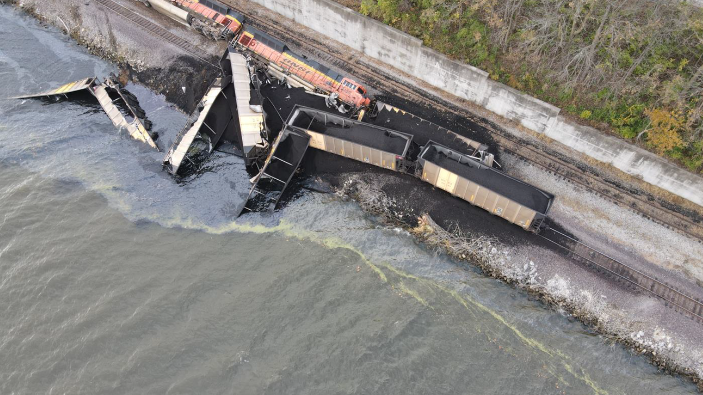 Pictures and text by NTSB

WASHINGTON (Sept. 15, 2022) — The National Transportation Board said Thursday that a Mississippi River towing vessel’s pilot and its captain pushed its tow up against a riverbank too close to a railroad track, leading to a collision and train derailment near Galland, Iowa.

Marine Investigation Report 22/22 details the NTSB’s investigation into the Nov. 13, 2021, collision between the towing vessel Baxter Southern and a BNSF coal train transiting the track along the shoreline of the Upper Mississippi River. The train struck a barge that was overhanging the railroad track. Two locomotives and ten hopper cars loaded with coal derailed. Six of the derailed hopper cars entered the river. Two train personnel sustained minor injuries. The collision resulted in $1.9 million in damages to the locomotive and freight cars. The barge sustained minor scrapes.

During a transit downriver, strong wind gusts made the situation unsafe for the Baxter Southern to continue the voyage as planned. Using the vessel’s electronic chart system (ECS), the captain and pilot identified a location on the riverbank that they believed represented a fleeting area safe to push up against. Neither the pilot nor the captain clicked an exclamation point symbol on the electric chart, which would have showed that the area presented a “Railroad Collision and Trackbed Erosion Risk.”

The pilot pushed the tow onto the riverbank, and three crewmembers headed forward on the tow to verify the forward-most barge was clear of the track. While the barge did not cross over either rail, it extended about a foot over the railroad ties.

Baxter Southern Rose Point in nighttime display showing the area marked by the magenta dashed line and exclamation point (left, annotated by NTSB) and information contained in the corresponding caution note (right). Source: Southern Towing Company
The NTSB determined the probable cause of the collision was the tow’s pilot and captain not correctly identifying a caution area on the electronic chart before deciding, due to the high wind’s effect on the tow’s empty barges, to push the tow up against the riverbank alongside a railroad track.

“ECS provide a wealth of navigation information to mariners. Electronic charting display and information systems (ECDIS) enables users to obtain more information about a feature by querying through a cursor pick,” the report said. “There are many features—including warnings and other navigation information—that can be obtained through a cursor pick that are not specifically noted in the default chart display. Mariners should ensure they understand all symbols and applicable advisories identified in their ECS, and owners and operators should ensure that their crews are proficient in the use of ECS.”
What's your opinion on this?
Login or register to write comments and join the discussion!
Read more...

In it´s August 2022 monthly safety scenario, the Swedish Club describes an accident where a pilot had fallen into the water, after one of the side ropes of the ladder broke.

Video What happens during a snapback event?

Case Study Video:
BHP - a global mining company and port owner – asked us to develop a test set-up to see what happens during a snapback event and evaluate their safety protection fence. The test data helped in the development of a safer protection fence and gave real insight into snapback behaviour.
Collaboration with BHP, Geobrugg and Wilhelmsen.

They are very proud at Next Generation Shipyards in Lauwersoog; the brand-new tender for the Dutch Pilotage is ready in the harbor. Costs: 3.5 million euros.

On board Pilot One during boarding maneuvers to one of the regular ferries that connects Tarifa with Tangier city.