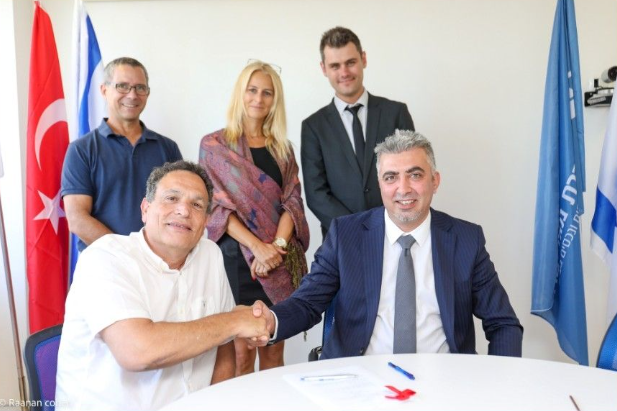 Haifa Marine Services and Med Marine signed a contract for the construction of the new state-of-the-art vessel, MED-P16 class 16,5m 21 knots Pilot Boat. It is Camarc Design of UK-based naval architects and is one of Europe's leading small craft design firms specializing in the design of seaworthy high-speed working.

Contract signing ceremony was held in Haifa, Israel at the facilities of Haifa Marine Services.

The vessel will be built in Med Marine’s Eregli Shipyard in Turkey’s Zonguldak region.

Camarc Designs are described as following;

Camarc Pilot boats are well-proven in service and offer specific features unique to those required by this type of craft and pilot boarding operations. Camarc design pilot boats are used by Port Authorities and Pilotage organizations worldwide.

With these features, MED-P16 offers the opportunity to expand operational capabilities for the Haifa Marine Services when joins its fleet.

We are very pleased to sign this prestigious contract. MED-P16 class pilot boat have been extensively tailored to meet Haifa Marine Services’ operational requirements. I believe this project strengthens Med Marine position in Israel and we are looking forward to further developing our existing relationship with Haifa Marine Services.

Med Marine A.Ş.
What's your opinion on this?
Login or register to write comments and join the discussion!
Read more...

Today we have talked to  Frank Kowalski, Managing Director at Safehaven Marine

Kenyans will on Tuesday celebrate the 6th Mashujaa Day to honour the sacrifices and achievements of various individuals in contributing to the welfare of society and the nation at large. In our continuing series of K24 Mashujaa we spotlight a middle aged woman in Mombasa who has beaten all odds to become East Africa's only female marine pilot. Mercy Milanoi spent the day with Elizabeth Marami in the high seas and tells us how she is scaling the heights in a male dominated field.

A loaded bulk carrier is a bit tricky to handle, do to all that mass: de require a lot of power in order to be stopped. This is why this maneuver are normally slower. Same applies to tankers.

Article Save The Date: Webinar Dangerous Ladders with Arie Palmers

On 1st April 2022 Brazil Pilots - Praticagem do Brasil - will organize a webinar about dangerous ladder with speaker Arie Palmers.

Video The pilot boat "Nova Pilot" heading out from her berth in Halifax, Canada

Fount on YouTube. Created by Charlotte Katherine
The pilot boat "Nova Pilot" heading out from her berth.
#Halifax #4k #NovaScotia

Opinion What is a Tug's Bollard Pull and How İt is Calculated?
663