The main cargoes are bauxite, soy, wheat, petroleum and byproducts, containers and cement. Each year, around two thousand pilot services are provided in the region, ecologically the most sensitive in the world, where in addition to the biodiversity, the waters feed, quench the thirst and ensure the livelihood of the fishing, indigenous and riverside communities.
“In the Amazon, the rivers control people’s lives,” reminds pilot Ricardo Falcão, who has worked for more than 20 years in that pilot station. 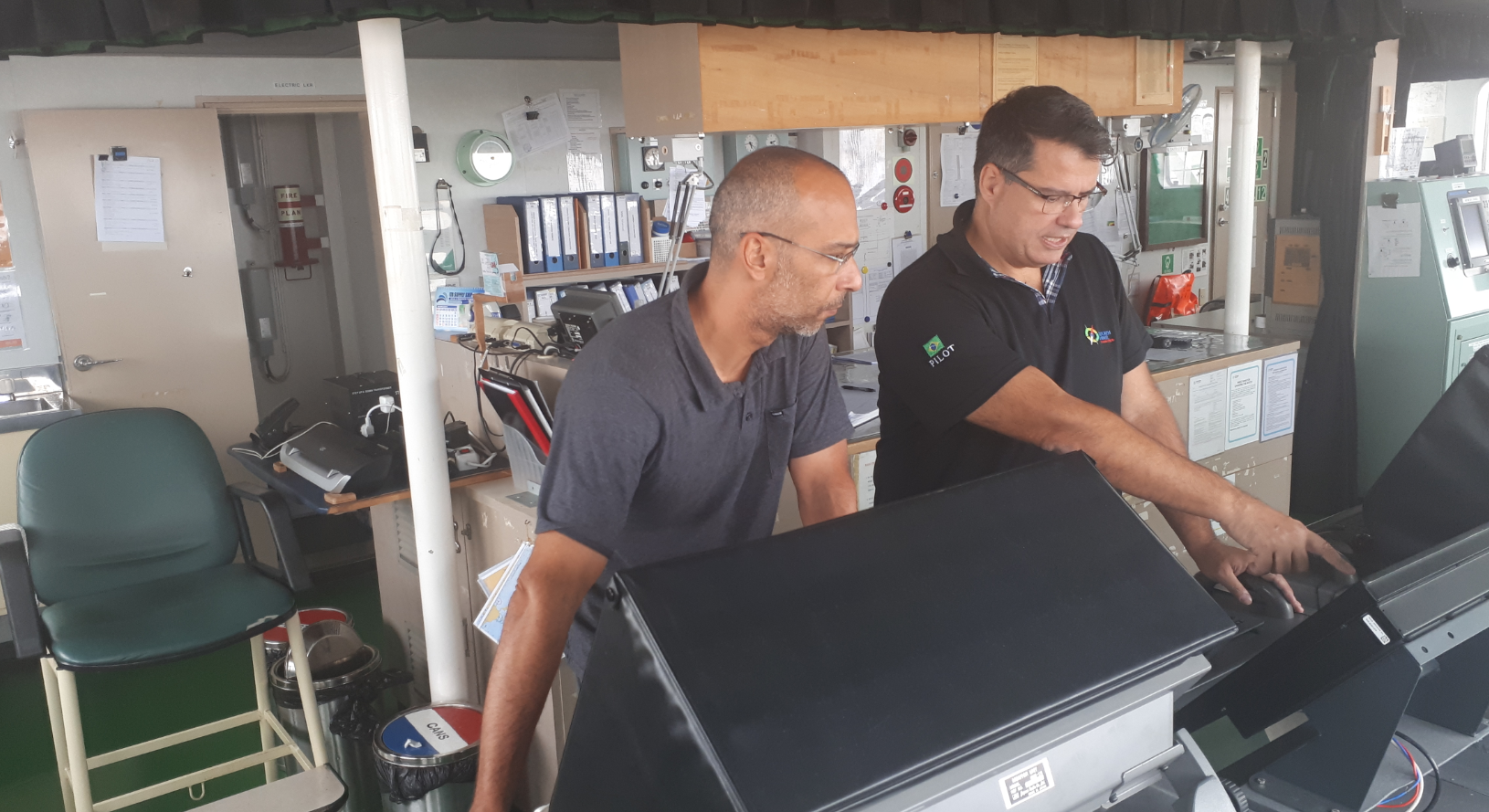 Its capacity is the largest of the 21 Brazilian pilot stations, because most of the time the service calls for the presence of two pilots taking turns on the ship’s bridge in voyages that could take up to 72 hours, depending on the stretch of river and the vessel’s capacity. Moreover, due to the region’s size and logistic challenges, the minimum estimate for a pilot to arrive on the spot and board a vessel is 24 hours.

For example, for a couple of pilots in Macapá to board a ship in Itacoatiara to sail down the Amazon River, they must take a plane to Belém, another to Manaus and then a four-hour journey by car to the pilot station’s operational base – a journey that could take a total of 12 hours, considering the limited air network.

For two pilots to bring a vessel in from Trombetas it is even more complicated. They would have to fly to Belém, take another plane to Santarém and then a motorboat that only leaves once a day and takes six hours to reach the terminal. The same pilots, however, combine the return service, staying overnight in a house built on land leased by the mining company that operates in the area while they wait for the ship to be loaded.

At the Juruti terminal, the pilot service has to adopt a similar procedure. But there a hotel is available for the pilots to wait for the loading. However, to reach the Munguba terminals on the Jari River, many fly from Macapá in small planes commonly called teco-teco. Others who prefer not to do that must endure up to eight hours of road in very poor conditions, and this in the dry season.
“No other pilot station has such logistic challenges. The closest to this reality would be PZ-2 (Itacoatiara-Tabatinga),” comments Adonis dos Santos Passos Junior, CEO of one of the companies operating in the PZ, in the Pilots’ Amazon Basin Group (BAP).

In addition to an operational base in Itacoatiara, the pilot companies have another one in Fazendinha, in the district of Macapá. And there is also a centralized base in Belém, which distributes the service to the pilots that are on the rotation schedule. Operations common to all the companies are run through the Unipilot, the PZ-1 Cooperative for the Pilots’ Support and Logistics.
Because of the time taken to go onboard and the navigation, the PZ work schedule covers 15 days, time when the pilot is away from home and on ships with no communication with their families for most of the voyage. It is seldom that a candidate chooses PZ-1 as first option in the public selection process for the job as maritime pilot.

Another challenge is the constant change in the riverbeds, accompanied by the pilot service’s own bathymetry. Sandbanks are forever shifting. The regional nautical chart dates from the 1980s and was finally updated in the first fortnight of March this year, after a survey completed a year ago. This situation would cause ship captains to ask why their vessel would be sailing above a piece of land that had, in fact, already disappeared due to the action of the river. Rumos Práticos ascertained that at least two of these stretches still appear as land in the new nautical chart: Igarapé-Açu island at the entrance to Santarém, and part of Santa Rita island.

“The captain needs to trust the pilot, who does the voyage regularly,” says Adonis dos Santos, a navigation officer who worked in Transpetro and was a Ciaga instructor for 14 years before being approved in the 2011 selection process.

Pilot Castro Alves, of the company Amazônia Serviços de Praticagem, approved in the 2012 selection, was a naval officer until he became a tax inspector, and already knew the region. He mentions two other challenges along the 1,300 miles. One of them is lack of proper means, such as, for example, on the River Jari where there is no help from tugs for mooring and unmooring at the terminals. Until recently, this was the same situation at the Juruti terminal. He recalls that in the 1990s the port of Santana was on stilts.

“In some places, we operate almost in the state-of-the-art. In Jari, we use the river’s current to moor and unmoor. There are no tugs. The maneuvers are very detailed.”
The traffic of vessels with little or no lighting or without necessary instruments is another complication, according to Castro Alves:

“Some find it hard even to use the radio. Few have an AIS (automatic identification system). Every so often a pusher (tugboat/barge) crosses our bow and we are forced to act fast to prevent an accident. We report all problems to the Brazilian Navy.”

The muddy arc of the North Bar
The most critical stretch of navigation is the muddy arc of the North Bar of the Amazon River that, despite this, does not require the assistance of an onboard pilot. However, for safety’s sake, ship owners hire the service for loaded tankers and vessels carrying soybean and corn, with over 11.5 meters draft. After this crossing, the pilot service is optional from the Great Channel of Curuá to Macapá, when it then becomes mandatory until Itacoatiara.

Rumos Práticos accompanied a pilot service in a tanker that crossed the North Bar until Macapá. The oil tanker was 179.99 meters in length and 32.2 meters in breadth, with an 11.5-meter draft. Its final destination was Manaus (AM), in the PZ-2, where the almost 40,000 tones of crude oil loaded in the Suape Port in Pernambuco (PE) would be refined.

The Amapá station pilots allocated to assist the vessel’s captain were civil engineer Daniel Martinez, also approved in the last selection process in 2012, responsible for updating the navigational chart for his colleagues using the pilot bathymetry service; and Ricardo Falcão, president of the Brazilian Maritime Pilots’ Association (Conapra).

To board the tanker they flew from Macapá to Belém and then traveled by car for three and a half hours to the district of Vista Alegre, in northeastern Pará, where the Amapá pilot station shares the operational base with PZ-3. On their arrival, they were informed that the ship was behind time to meet them at the pilot waiting point in Espadarte, expected for midnight. 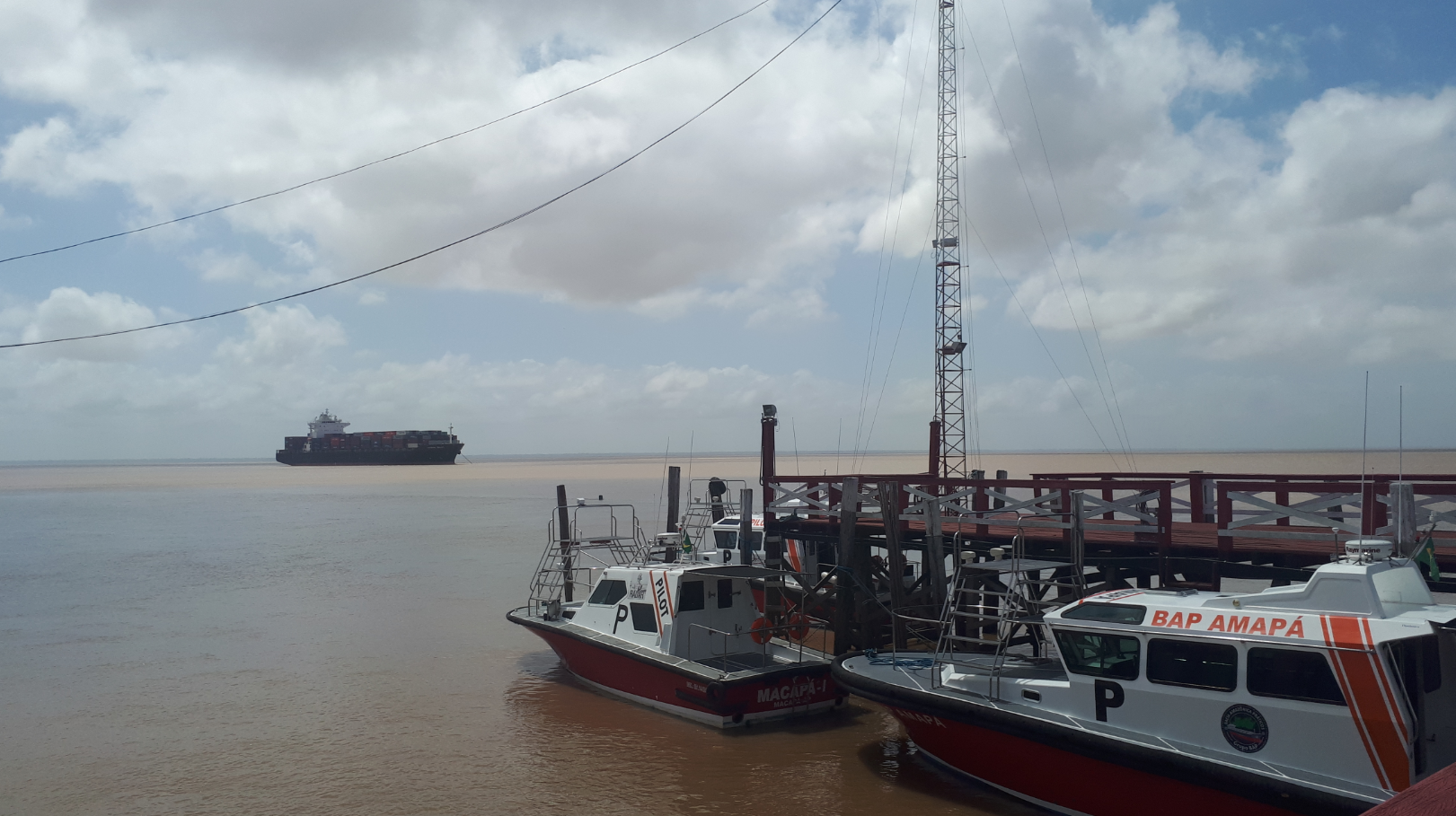 Consequently, the voyage to Macapá that would have taken 24 hours would now take 36 hours, since they would miss the first high tide to cross the muddy arc of the North Bar, a 20-mile stretch that requires extremely accurate navigation for the vessel not to touch the seabed. At 1:40 a.m., after an hour by motorboat, at last the pilots boarded in the open sea using the Jacob’s ladder.

There were 150 nautical miles (240 kilometers) until they reached the North Bar. The passage through the muddy arc was made in the early hours through the new channel announced days before in the navigation chart, further to the South and up to 80 centimeters deeper.

It was a slow-running crossing, as they were continuously monitoring the one-meter space below the keel required for oil tankers. In addition to the two pilots, also on the bridge were the captain, first mate, navigation officer, steersman and a sailor who was keeping an eye on the port side traffic. On the other side, in the old channel nine fishing boats were hindering the passage.

In this direction, that is, sailing up the Amazon, it is necessary to wait for a 3.8-meter tide for the passage of a vessel with 11.7-meter draft. On the day of the crossing, the high tide was 3.61 meters and the draft 11.5 meters. In the other direction, sailing down the river, two 3.8-meter tides for the 11.7-meter draft are necessary. The pilot service has its own tide table for consultation, since it has installed a tidal gauge (marigraph) in the region. On some days the high tide may even reach 4.7 meters.

Ricardo Falcão mentioned that the new channel proved to be a reality immediately on this first passage, with good space below the keel even with a not too high tide:
“We still have a lot to gain. We can even consider drafts of more than 12 meters in the future. This was just the first passage through the channel and it was an extremely safe operation. It shows that our bathymetries and tide table are giving us the results we expect: increasing the size of incoming ships, permitted draft and productivity in the region in complete safety. Each centimeter we gain is another five trucks on board. The North has got all it takes to become a port hub.” 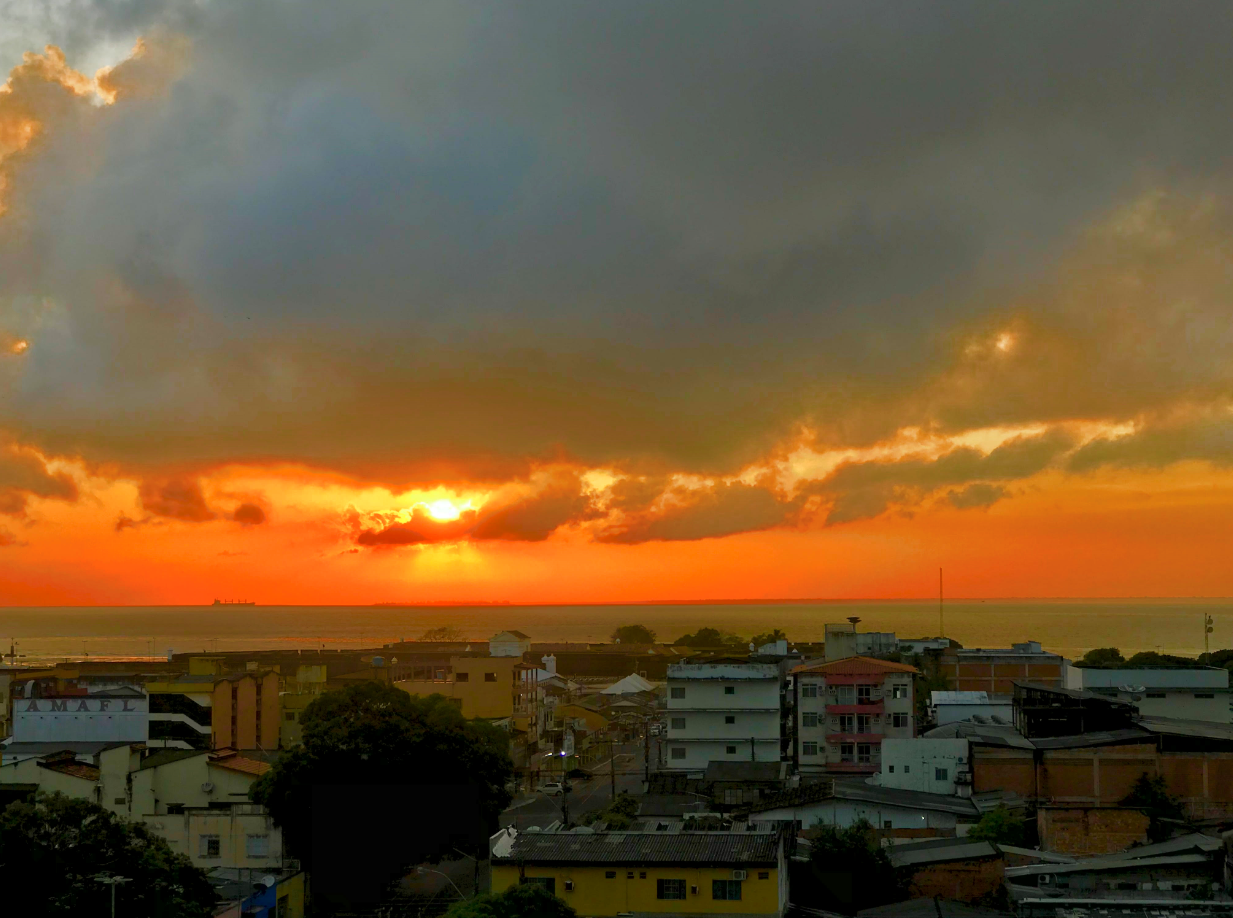 Login or register to write comments and join the discussion!
JS
James Sweeney USA
I worked in maritime intelligence in NYC with a few different pilot associations . interesting article....years later ,as a cruise consultant, I sold some cabins on a Princess Cruise down the Amazon River , out of Belem ,I think...….One Port of Call was Devil's Island......I would have loved to take a cruise like that.....
Jim Sweeney
hercules6596@gmail.com


[show more]
0
RC
Ricardo Caballero Vega Panama Canal Pilots Association, Panama
I am glad that this article has been published. The service provided by Pilots is usually underestimated. There is this belief, even by people within the shipping industry, who considered Pilots to be unnecessary.
0
Read more...

Everton Schmidt assumed the position with the commitment to maintain the activities during the new coronavirus pandemic.

Spectacular (silent) film footage of the construction of the Panama Canal more than a century ago. The film shows the construction of the Miraflores and Gatun locks in detail as well as the digging of "The Culebra Cut" including steam trains, steam shovels and steam dredgers at work and scenes of the locks an the Canal in its first days op operation in 1914. Wikipedia: The Panama Canal (Spanish: Canal de Panamá) is an artificial 82 km (51 miles) waterway in Panama that connects the...