"HMM Algericas" at port of Hamburg, photo taken by a video of Jan Tiedemann

The fleets of container vessels storing more than 20,000 TEU 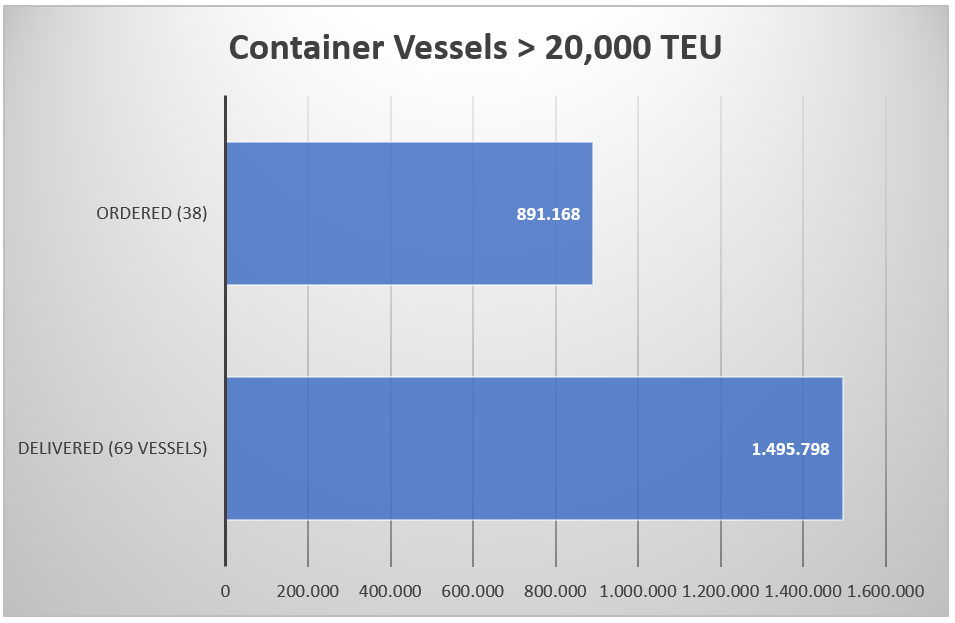 
The largest vessels today
Today's largest container vessel is the "HMM Algeciras" (23,964 TEU). The vessel was delivered in April 2020 and has already since May two new sisters of the same size: "HMM Copenhagen" and "HMM Dublin". The next sister's "HMM Gdanks" and "HMM Hamburg" follow this month. In September another two follow sister vessels complete the fleet to 7 container vessels of this size in September this year for the Hyundai Merchant Marine (HMM).


Who are the other members of this exclusive club?


Is the size of 24,000 TEU the end?
Jan Tiedemann from Alphaliner has figured out that it could be possible to build vessels of 26,000 TEU.
For further information: "Is the 26,000 TEU container vessel coming now?" - article by Marine-Pilots.com
The article also explains the impact of ever larger ships on pilots, tugs, port operators and terminals.

New Ships Orderbook c/o TRENZ GmbH
What's your opinion on this?
Be the first to comment...
Login or register to view comments and join the discussion!
Read more...

The last month Jan Tiedemann from Alphaliner (BRS) in Hamburg has reported, that DNV GL has awarded Hudong Zhonghua Shipbuilding (group) Co., Ltd. an approval in principle for the design of an LNG-powered 25,000 TEU container vessel. Based upon the reported vessel dimensions, he reckons that the ship could actually have a capacity closer to 26,000 TEU.

Admiral Osama Rabie, Chairman of the Suez Canal Authority (SCA) witnessed the transit of HMM ALGECIRAS, the world's largest container vessel, on its maiden voyage since its launching last April. It transited among the south convoy, via the New Suez Canal, heading from Yantian to Rotterdam.

Video Huge ship crane collapses during tests in the port of Rostock, Germany

Rostock; 02.05.2020: Actually, the special ship with the giant heavy-lift crane crane, which was designed for over 5,000 tons load capacity, was supposed to be delivered in the next few days. During final tests the crane broke off in the afternoon of May 2. Four people were injured in the accident. This is the second accident with Liebherr cranes this year in the Rostock overseas port. Already in February this year two cranes were reported to have fallen into the water during loading.

Vessel was planned to work on Moray East Offshore Wind Farm in Scotland waters, she was to begin works in some two weeks, after load tests run in Rostock. ORION I was built in China, but crane was installed in Rostock