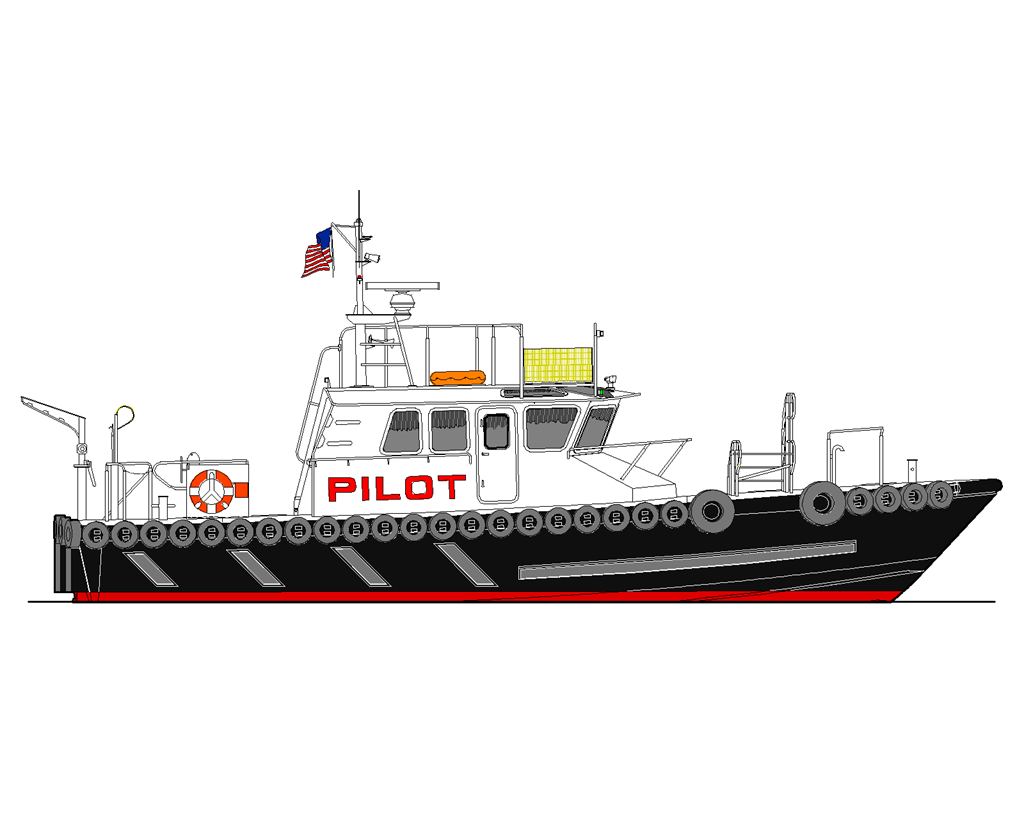 The Associated Federal Pilots in Metairie, LA, has ordered a Chesapeake Class pilot boat from Gladding-Hearn Shipbuilding, Duclos Corporation. The pilots’ first launch, built by the Mass.-based shipyard, is scheduled for delivery in July 2021.

Since the Chesapeake Class pilot boat was introduced by the shipyard in 2003, 21 have been delivered to 12 pilot associations throughout the United States.

With a deep-V hull designed by Ray Hunt Design, the new all-aluminum launch measures 52.6’ overall, with a 16.8’ beam and a 3.10’ draft. Powered by twin Volvo Penta D-16, EPA Tier 3-certified diesel engines, each producing 641 Bhp at 1800 rpm; the vessel’s top speed is expected to reach over 26 knots. A Humphree interceptor trim control system, with its
Automatic Trim Optimization, will be installed at the transom.

The engines will turn 5-blade Bruntons NiBrAl propellers via ZF500-1-A gear boxes. The launch will be equipped with a 9kW Northern Lights genset.

The vessel’s wheelhouse, with a small trunk, is being installed amidships on a flush deck. With forward-leaning front windows and the helm station on center, the wheelhouse will be outfitted with six Llebroc pilot seats, a bench seat behind them, and built-in cabinetry. The forecastle will include a split upholstered settee/bunk, porta-potty, shelving and storage space for safety gear. The interior will be cooled by two 16,000 Btu reverse-cycle HVAC units.

Outside of the wheelhouse are wide side-decks and two raised boarding platforms on the bow. A ladder aft on the wheelhouse will lead to hinged boarding platforms on the roof. A control station will be located near the stepped transom, along with a winch-operated rotating davit system over a recessed platform, for pilot rescue operations.
Gladding-Hearn Shipbuilding
What's your opinion on this?
Login or register to write comments and join the discussion!
Read more...

by www.MaritimeBulletin.net - published on 18 January 2020

According to a report today by www.MaritimeBulletin.net a mooring boat was rammed from a container ship and sunk.

Video To The Heads with the Port Phillip Sea Pilots - Nepean

Flying from Shortlands, following the beautiful HM Orc 181 "Nepean" Flying to the very edge of VLOS helped by the elevated position in the carpark, also helped by a good strong coffee from Hesse St! Little known fact, when I was a small child I went out in the Pilot boat from (dad recalls) Gem Pier in Williamstown! I only remember being a bit scared and that's about it. Learn about the Port Phillip Sea Pilots here - https://www.ppsp.com.au/story/ Learn more about the pilot boat here:...

The Maritime Pilots Institute is the premier training facility for River Pilots employing a mix of virtual and real world facilities. Located in Covington Louisiana, we are 45 minutes from downtown New Orleans while offering the safety and amenities of small town life.
The training presents a balance between simulated locations with a variety of environmental conditions and manned scale models of cargo ships in a series of lakes with docking and currents and live factors such as wind and...