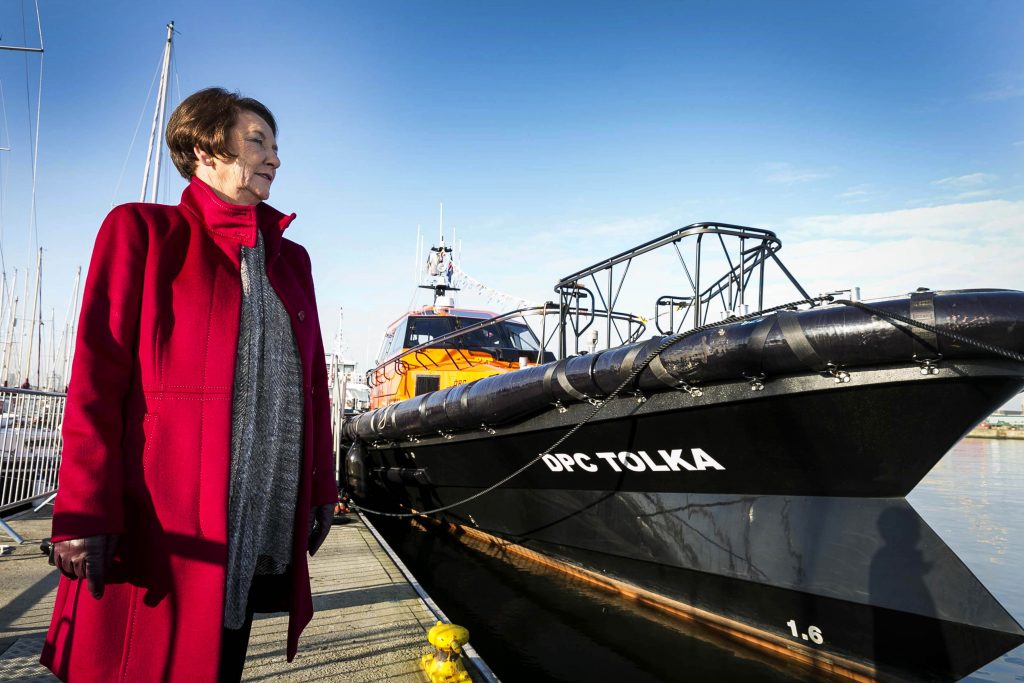 Father Ivan Tonge of Ringsend Parish and Reverend William Black, Port Chaplin from the Mission to Seafarers, blessed the 17.1 metre vessel before the boat’s godmother, Eileen Murray, carried out the traditional smashing of a champagne bottle on its bow. Eileen, a local of Ringsend, is the Vice Commodore of Poolbeg Yacht Club and her father was one of its founding members.

DPC Tolka is the newest addition to the port’s fleet of working vessels, which includes tug boats Shackleton and Beaufort, multi-purpose workboat the Rosbeg, and pilot boats Liffey and Camac. She replaces the Port’s oldest pilot boat Dodder, which was retired from service after 23 years.

DPC Tolka represents a vital upgrade in the provision of pilotage services at the Port and will allow Dublin Port’s team of highly skilled marine pilots to reach and board large ships in all weather conditions from a greater distance out into Dublin Bay. Pilots have been training on the new vessel since her arrival.

Eamonn O’Reilly, Chief Executive, Dublin Port Company, said: “The christening of a new vessel is a longstanding tradition and I cannot think of a more suitable godmother to the Tolka than Vice Commodore Murray, whose family are steeped in Poolbeg Yacht Club’s history. I thank Eileen and the Club for hosting this event today and Dublin Port looks forward to continuing to work closely with both the local community and sailing organisations in the future.”

Dublin Port Company
What's your opinion on this?
Login or register to write comments and join the discussion!
Read more...

Med Marine and IBK Ltd. signed a two-vessel contract for MED-P16 series last November for Nigerian Ports Authority’s operations in Lagos, Nigeria. A year after that, Nigerian Ports Authority takes the delivery of the two high- quality pilot boats. Both units have been despatched on a specialised transport vessel to Nigeria from Turkey.

For nearly 150 years, the Bar Pilots have protected our environment by safely guiding ocean-going vessels through our waterways.