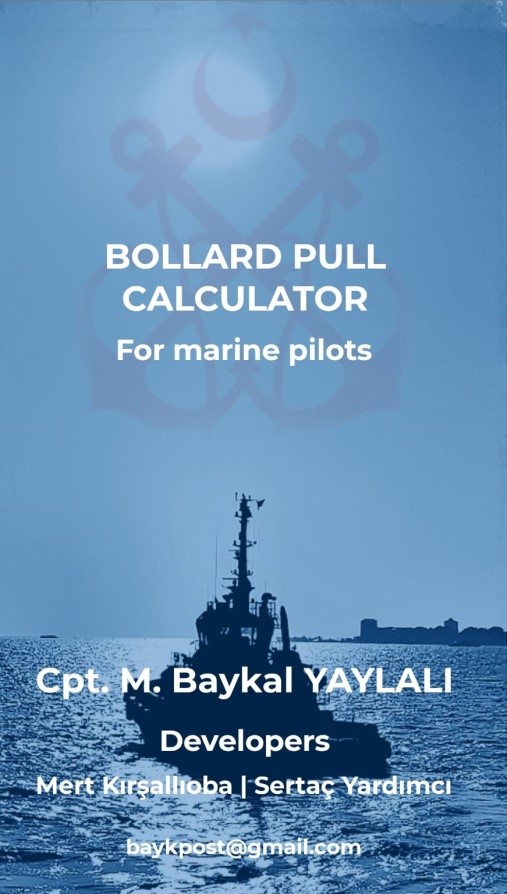 Required tug power and number of tugs needed in variable conditions of wind, current and waves isin most cases an assessment made by pilots based on their professional experience. However, assessments will raise questions by lawyers if something goes wrong. They will use tools to calculate what really is needed with respect to tug power and number of tugs. They have furthermore the advantage of time.
A pilot has not so much time. For a pilot, if tugs are needed, it is hard to calculate the required tug power just before or during ship manoeuvring. Furthermore, the more extreme the weather conditions become the less accurate assessments are and the higher the risk of too little tug power.
A handy and simple tool to determine in a minimum time what is really needed as tug assistance, is the Pilot’s Tug Assist Tool(PTAT) which calculates in an approximate way the total required tug power for ships in various conditions of wind, current and waves. This tool can be loaded as an app on the smart phone.
The tool is based on the calculations and graphs as explained in chapter 5 of the book “Tug Use In Port”, written by Captain Henk Hensen FNI; first published in 1997 by The Nautical Institute, London, UK, with a 3rd edition published by The ABR Company, UK, in 2018 (www.tugandosv.com). In this book is also explained why a safety margin of 20% is included in the calculations.
The program has been tested for more than 2 years and it has been observed that it works in a satisfactorily way.
The various possibilities of the PTAT are addressed on the following pages.
Much of the information can also be viewed by selecting the "ⓘ" symbol of each section on the app. 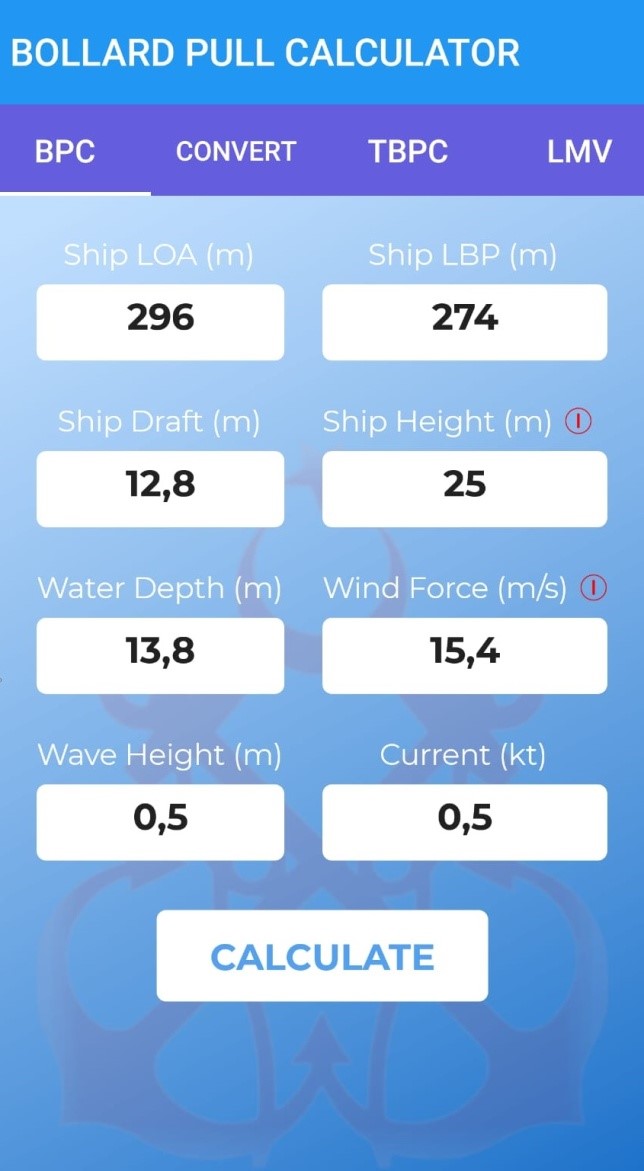 i. Calculations for required tug power in case of cross winds

Ship Height: The value to be written in this box is critical.
It is the height from sea level to the average maximum height of the vessel, or in case of deck the average maximum height of cargo loaded on deck, including deckhouse.
It can be difficult to assess the sideways wind area. With container vessels it is rather easy.
When you keep in mind that the height of one container is about 2.60m, then it is easy to calculate the total height of the containers on deck. Between the lowest container and the main deck is also about 2 meters space. Height of container can furthermore be used to assess other heights as well, such as the height of main deck above water.

Wind force: Another important box in the same section.
As wind does not blow at constant speed, the highest wind speeds are important.
Therefore, it is recommended to use the estimated wind force in gusts.
Wind speeds given in Beaufort scale are average wind speeds during a 10 minutes
period and therefore too low and not suitable for calculation of required bollard pull. 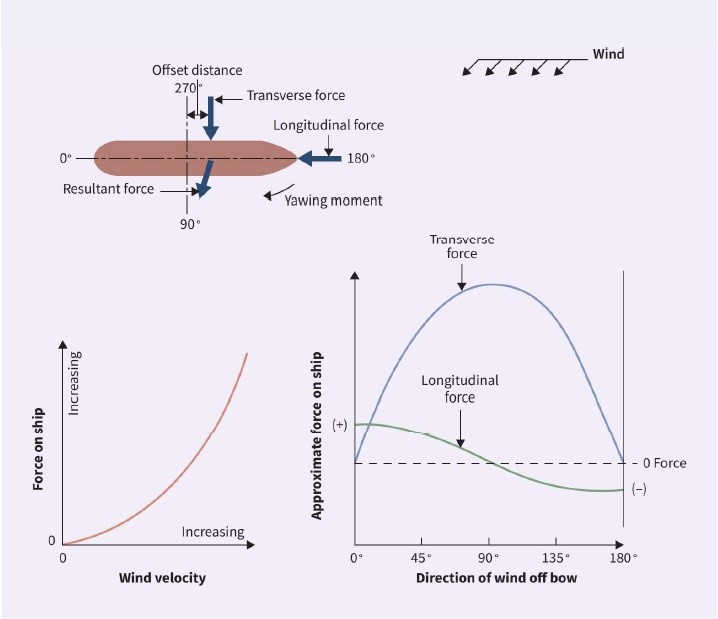 The wind force coefficients can be determined in wind tunnel tests and from computations. For several ship types the wind coefficients are known for all angles of attack and certain loading conditions.
For tankers and gas carriers they can be found in for instance, OCIMF publications. Lateral forces are largest and most important for calculating bollard pull required. C(yw)varies between approximately 0,8 and 1,0 for beam winds, depending on ship's type and loading condition, but lies mostly between 0,9 and 1,0.
This coefficient (C(yw)) is accepted as 1.0 in the program.

A safety margin of 20% is included. Therefore 25% has been added to the outcome of previous formula. The reasons why a safety margin is needed are explained in the book `Tug Use in Port’.

The program interpolates the ratio draft-depth for the correct lateral current force coefficient.
Again for reasons explained in `Tug Use in Port’ a 25% have again been added to the outcome of the formula to create a safety factor of 20%

Note:
It should be well understood that when pulling on a short towline, for instance at a distance of one tug length between tug and ship, there can be a large loss in pulling effectiveness of even up to 60% of the bollard pull of the tug, depending on direction of tug propeller wash and UKC of the ship. The shorter the distance the larger the loss. The negative effect of a pulling Voith tug will be less. As situations of distance and UKC varies, this loss can not be included in the program. (Fig.4-operational info)

Although jetties, terminals and harbour basins are usually located well sheltered from waves, certain terminals and jetties may be located such that they can be under influence of waves. Wave action may become important when wave conditions exceed certain threshold values. Wave forces are essentially dynamic in nature and it is important to understand the nature of wave loading and vessel wave motion response and when a more rigorous dynamic analysis may be required.
In this program, only short beam waves are considered. The forces per metre of ship’s length due to these short period waves then amount to approximately:
Fwave = 0,35 ρ g LBP ζa² Newton
ρ = Density of water in kg/m³
LBP =Length of waterline, take length between perpendiculars in m.
ζa = Wave amplitude, equal to 0,5 * Wave height. (Hs)
Hs = Significant wave height from through crest, as indicated by an experienced observer when estimating visually 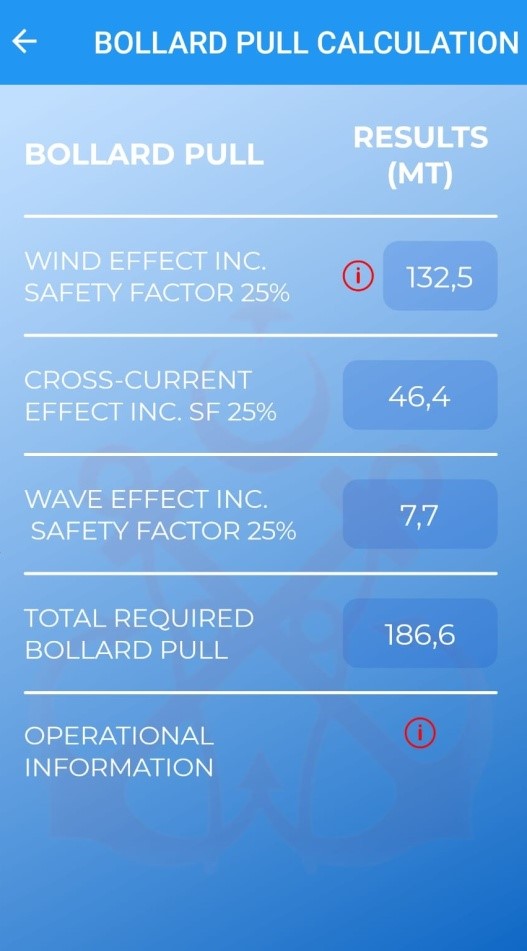 It is possible to convert in the “CONVERT” section:
kW and HP to metric tons thrust for bow and stern thruster, and knots to m/sec for wind.

In this section the user can calculate the required tug power to stop a sideways moving ship which has at 30m distance from the berth a certain transverse speed. This could be helpful for certain ships, such as those loaded with dangerous or hazardous cargo. Calculations can be performed for open as well as for solid berths.
Calculations apply to approximately 10% UKC 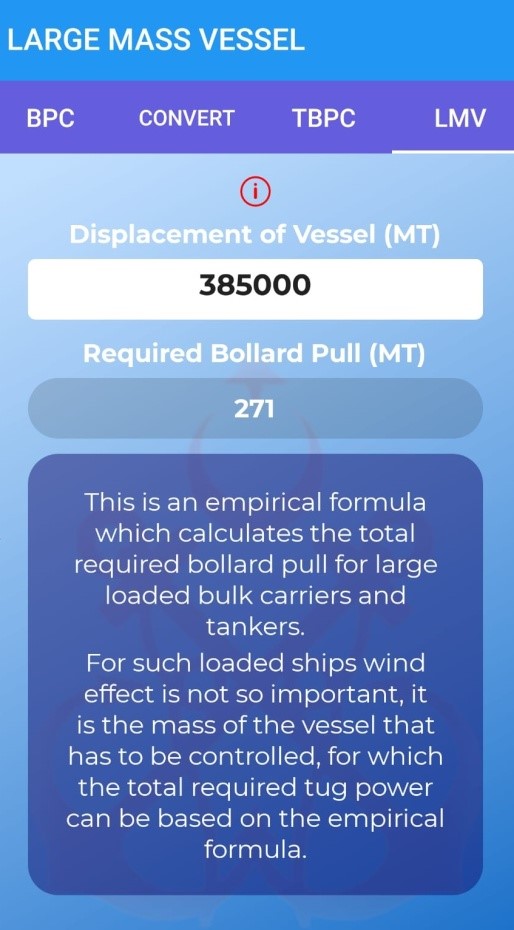 Loaded tankers and bulk carriers have a large displacement. For this type of ships the following empirical formula is used which is based on the displacement of the ships:

For such loaded ships wind effect is not so important, it is the mass of the vessel that has to be controlled, for which the total required tug power can be based on the empirical formula.

Note:
As with all large ships for which strong tugs are needed, such as container ships in high winds and large loaded bulk carriers, care should be taken that the deck equipment of the ships to be handled are strong enough for the powerful tugs.
For smaller tows, requiring less than 40 tons of Bollard Pull, this formula is not applicable.

I hope that all will use the app and that it may help you to bring ships alongside in a safe way particularly during adverse weather conditions, but preferable during good days and calm seas. Any suggestion for improvement of the app is welcome.

Furthermore:
I would like to thank Capt. Henk HENSEN for his advice and consultancy on the system, which has been invaluable.

Important note: Please note that data provided by the application are based on theoretical calculations. The calculations give an indication of the required bollard pull and should always be handled with care.


What's your opinion on this?
Login or register to write comments and join the discussion!
Read more...

The Container Ship RDO Conception arriving in Prince Rupert after a 10 day voyage from Tokyo. Once in our harbor, she was eased into the container terminal with a little help from SAAM tug boats Orleans and Venta. Filmed using a DJI Mini 2 If you are interested in purchasing a Mini here is a link to my DJI affiliate program. https://click.dji.com/AFpMBjgnYfRjCViNU2HZ_g?pm=link All video footage is owned by Nortcoast Drone and it can be licensed as stock footage. We are certified in...

This book was only available in some areas, now the author has created an e-book version. Furthermore it´s available on amazon as a paperback.

Completely new book on Ship manoeuvring techniques based on new revealing facts which have been brought to light. Must read for all the mariners to understand the behaviour of ships and how to control her behaviour during manoeuvring.

Before you, you see my third article on pilot boarding arrangements. After my two previous articles
(‘1000 ways to secure a pilot ladder’ and ‘1000 ladders around’, I have received a lot of feedback and
also questions to get deeper into the matter of combinations and embarkation platforms.

Article Study: Managing the Attributes of Pilot Errors in the Process of Redevelopment of Marine Pilot Reliability Index MPRI)
39