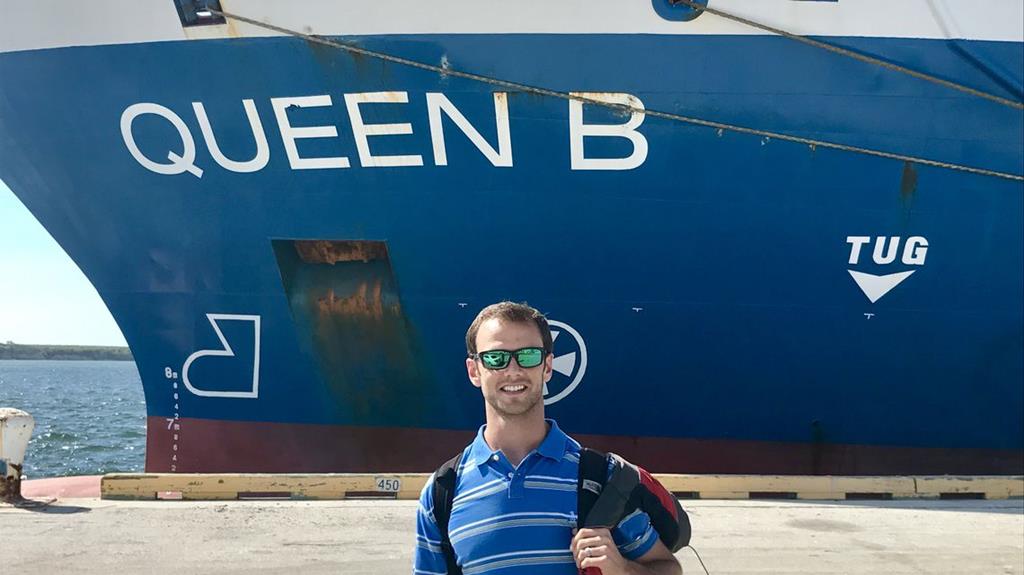 This article was written by Philip Morgan and was already published by "Tampa Bay Times" on 26. December 2020.
Photo by Brett Monthie.

Link to the original and full article below.

When your mission is guiding ships through congested waters

After spending years at sea, Brett Monthie had to chart the channels in Tampa Bay from memory in order to become a Tampa Bay harbor pilot. And then he spent 30 months in training. He’s one of 13 full pilots and six deputy pilots in the Tampa Bay Pilots Association. They guide the ships safely through the bay.

It’s an exacting job, and a dangerous one, considering Monthie has to hop from the pilot boat to the rope ladder hanging down the side of a ship – or from the ladder to the pilot boat – all while both vessels are traveling at about 10 knots. Monthie loves the work.

The 36-year-old harbor pilot, a graduate of the United States Merchant Marine Academy, talked with the Tampa Bay Times about his job.

Climbing a rope ladder 30 or more feet up to and down from the main deck of a ship has to be a harrowing experience.
Harrowing I guess is a good word to describe it, because we’ve lost – not Tampa personally – but we’ve lost, out of the 1,200 pilots in the U.S., we’ve had two in the last eight months and three in the last year that have had incidents on ladders (and) passed away.

Does it mostly happen when a pilot falls from the ladder and is caught between the ship and pilot boat?
Yes, typically that’s the case.… Most of the time our boats, once we get on the ladder, they peel away from the ship to avoid that.

Climbing a rope ladder isn’t easy, is it?
No, it’s not easy. Usually going up, to me, is easier. You just look straight up and you go. Coming down is actually a little trickier. You really want to have three points of contact on that (ladder) at all times if you can. And the farther down you go, it almost becomes like a pendulum.… You’re coming off the side of the ship and almost swinging with every step.
Read full article on original source (Tampa Bay Times)

Tampa Bay Pilots Association
Editor's note:
Opinion pieces reflect the personal opinion of individual authors. They do not allow any conclusions to be drawn about a prevailing opinion in the respective editorial department. Opinion pieces might be deliberately formulated in a pronounced or even explicit tone and may contain biased arguments. They might be intended to polarise and stimulate discussion. In this, they deliberately differ from the factual articles you typically find on this platform, written to present facts and opinions in as balanced a manner as possible.
What's your opinion on this?
Login or register to write comments and join the discussion!
Read more...

Text and photos by Tonci Regjo
Pilot for the Split Harbour

Briggs Marine invited High Impact Media (https://media.hi-impact.co.uk/) to spend a few hours on one of our Pilot Launch Vessels to help us demonstrate the day to day efforts of our crew in Liverpool.

Opinion The 2023 review of Pilot Transfer Arrangement Regulations, a chance for innovation?

In the spring of 2023, the IMO Sub-commission on Navigation, Communications and Search and Rescue (NCSR) may start a process of review and amendments to the SOLAS Ch V. reg 23

Video A day on a tugboat, time lapse edition

An entire day caught in a time lapse. Up and down the river twice.
Cool prospective 12000 TEU ship Turing min 2:00. !

Opinion What is a Tug's Bollard Pull and How İt is Calculated?
105