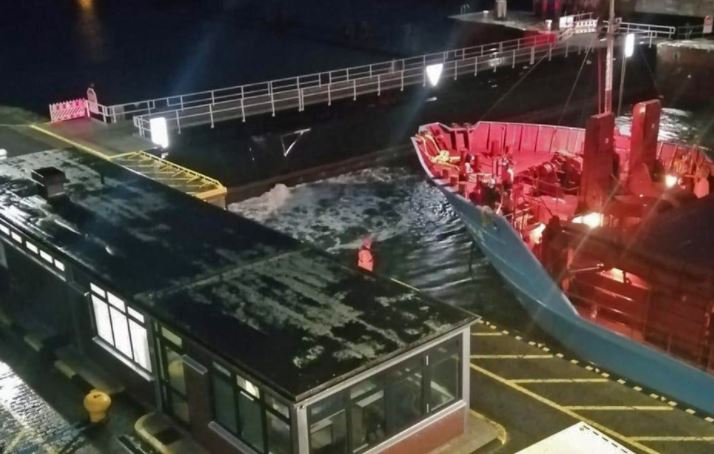 An accident occurred in the Kiel Canal lock at Kiel-Holtenau. The freighter "Wilson Goole" (88m) crashed into the gate of the north chamber on Saturday. The Kiel Canal is the busiest man-made waterway in the world.

It is not yet clear how the accident occurred. According to information from NDR Schleswig-Holstein, there was an engine failure on board the freighter "Wilson Goole". The 88-metre-long ship then crashed into the lock gate in the north chamber, coming from the sea without braking. The gate was severely damaged by the collision.

Unlike the accident last year with the freighter "Else" or more than three years ago with the "Akacia", the "Wilson Goole" did not get stuck. During the night, the ship was brought to the nearby Lindenau shipyard by two tugs. There were no casualties.

Detailed examinations of the lock gate on Monday

A video footage shows that a large hole has appeared in the gate of the north chamber. "We can say this much, that the gate is severely damaged again," says Detlef Wittmüß, head of the Kiel-Holtenau Waterways and Shipping Authority (WSA). It is not yet clear how long shipping will have to do without the chamber. According to Wittmüß, the damage assessment is currently underway. It will probably not be known until Monday, when divers have examined everything in detail

There is no replacement for the damaged gate

The dilemma is great in the first place because there is no other replacement. The last available replacement gate was installed when the freighter "Else" damaged the original last year. It has yet to be repaired. Another gate, which was damaged in an accident more than three years ago with the "Akacia", was originally supposed to be available again in the summer. According to information from NDR Schleswig-Holstein, however, it will be late summer or early autumn at the earliest.
When the freighter "Else" bumped into a gate last year, the last available replacement gate was installed. Now shipping can only use one lock chamber in Kiel for the time being. "If the busiest artificial waterway in the world only has one lock gate available, that is not only unfortunate, but a considerable impairment of shipping traffic," said Schleswig-Holstein's Transport Minister Bernd Buchholz (FDP). Long waiting times are inevitable. Presumably, many ships will now rather accept the trip around Denmark instead of using the shortcut through the Kiel Canal - according to Buchholz ecologically more difficult, as they would also consume more diesel this way.

After an accident: Long waiting times for ships on the Kiel Canal

Ships currently have to wait more than five hours for a place in the lock on the Kiel Canal - because since an accident in Kiel-Holtenau only one lock chamber is still in operation. The damage is to be assessed on Monday. At worst, a bottleneck threatens until autumn.

Frank Diegel is the CEO and founder of Marine-Pilots.com and the CEO of the IT company TRENZ too. His companies are located in the two german harbour cities Bremen and Hamburg. He has studied computer science. For almost 10 years he has been developing hard- and software especially for pilots. The topic of digitalisation in shipping is his great passion.
Visit member profile

Login or register to write comments and join the discussion!
MR
Merv Rowlinson United Kingdom
René: seems like a run of bad luck on the Kiel Canal. Ricardo states that engine failures should not occur these days. Of course he is right but the reality of our business is that cost savings = poor training and maintenance which will lead to such catastrophic events..
Just as well that you have a powerful fleet of tugs operating in the Panama Canal. Hopefully "runaway" ships can be halted.by the stern tug?

René Hartung Lotsenbrüderschaft NOK II Kiel / Lübeck / Flensburg, Germany
There are two spare gates: one is damaged and untouched since 7 month (vessel tried to enter the canal without picking up a Pilot by entering a closed lock) and spare gate number two was destroyed when a container vessel („Akacia“) had a malfunction in their CPP-system and hit the gate with high speed. That was three years ago and our authorities are not even ashamed when making up „reasons“ for why that gate could not be repaired since then.
In a private business someone would have lost his/her job for that kind of mismanagement and negligence
1
RC
Ricardo Caballero Vega Panama Canal Pilots Association, Panama
Engine failure could be the cause. However, engine failures should not occur these days. I could only think of poor or deficient maintaining, if indeed the cause was an engine failure.
1
Read more...

The Federal Bureau of Maritime Casualty Investigation (BSU) hereby announces the publication of the Investigation Report No. 285/20 on 26 October 2022. The report deals with the contact of the multipurpose ship ELSE with a closed lockgate of the Kiel-Holtenau lock which occurred on 29 August 2020.

Short video of the arrival of the bulk carrier BELO HORIZONTE. Shooting a shipping documentation and industrial photography for AO SHIPPING HaAMBURG in BARIA SERECE, PHU MY PORT in Vietnam. Activities and the unloading of Soya by cranes for a freight transport film. Director, dop/cameraman, drone operator, production: Peter Scheid. We thank the Baria Serece management in Phu My, Vietnam for their great support to realize this shooting. SHOWREEL INDUSTRY, VIETNAM FACTORY & MACHINES: REEL 1....