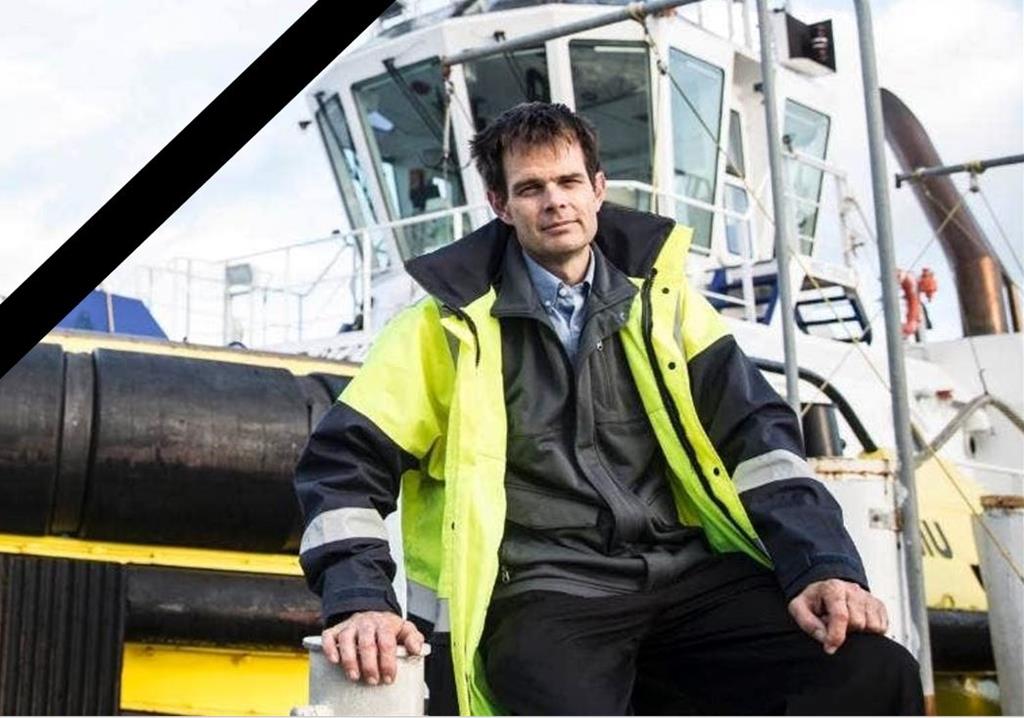 Picture courtesy of www.stuff.co.nz
Many people we know only through the internet and we communicate by mail, chat or via social media. But this is also a way to build stable relationships and a good working relationship.

I was very surprised when, in the last days of November last year, I received a call via Facebook messenger from a familiar contact on the other side of the world. It was Troy Evans, a captain and pilot in the port of Tauranga, in northern New Zealand. I had never heard his real voice before, although I had already communicated with him so much via the internet.

His voice sounded familiar. I didn't quite understand what the real reason for his call was. His voice was a bit weak, but he was keen to speak to me in person. He thanked me for my work and for initiating our website, just as I thanked him for his great contributions to the safety of pilots worldwide, which we put out into the world. The messenger call had then left me a little perplexed, ashamed and also a little distraught after we had finished it. It sounded very much like a goodbye.

I knew that he had been struggling with the treacherous disease Parkinson's for some years. I had not yet fully understood the full implications of first and last call, but I had been very moved by it. Today, it concerns me even more than it did in November last year.

Picture courtesy of www.stuff.co.nz
It was only when the first news of his death reached me on 30 December that I fully understood why he had called me. He had finished with his life at that time and he was aware of his imminent death. That makes this conversation we had all the more weighty and I will never forget it.

I have a great respect for the man Troy Evans and what he did for the safety of pilots all over the world. He deserves not to be forgotten and he will continue to be with us in our lives with the results of his work.

I would like to thank Troy today for what he has left us. We will cherish his work and I will never tire of spreading the word about his results and experiences.

The international pilotage community has lost a great campaigner for greater safety on pilot ladders in Capt Troy Evans.

Somehow it makes sense that the ladder used by sea pilots to board ships is called Jacob's Ladder.... It leads them out of the stormy waters and into the safety of the huge ships. And the job of the pilots on the ship is to bring the ship safely into port. Troy Evans has made his final port of call, and I hope he is now in a better world for it. I will never forget him.

Our thoughts are with the late Captain Troy Evans. May his soul rest in peace. And may his family and friends find comfort in all the loving memories they shared with him.

found on social media by Arie Palmers
Editor's note:
Opinion pieces reflect the personal opinion of individual authors. They do not allow any conclusions to be drawn about a prevailing opinion in the respective editorial department. Opinion pieces might be deliberately formulated in a pronounced or even explicit tone and may contain biased arguments. They might be intended to polarise and stimulate discussion. In this, they deliberately differ from the factual articles you typically find on this platform, written to present facts and opinions in as balanced a manner as possible.

Login or register to write comments and join the discussion!
se
sjaan evans New Zealand
Thank you so much for this wonderful reflection. His influence clearly was so universal. Miss him deeply.
1
AB
Adalberto René Borrego Argentina
R.I.P . Capt. troy evans
1
Read more...

Article Pilot ladders - bits and pieces and a bit of testing

The following article appeared in AIMPA magazine number 2 about the strength and testing of pilot ladders : There is much more information about pilot ladders in the AIMPA magazine, second issue, if you wish to read more you can download a copy at the bottom of this post.

Specialized training for maritime pilots
Quebec City, Quebec, Canada – June 23, 2020 – The Maritime Simulation and Resource Centre (MSRC), a world-class pilot simulation training and port feasibility studies facility, is pleased to announce the release of an informational video on the new S-102 standards on surface bathymetry products.
In the video, Captain Pascal Rhéaume, pilot and member of the technical committee for the Corporation of Lower St-Lawrence Pilots, an active stakeholder...

The Port of Banten is an exciting addition to Innovez One’s global roster of ports. It is the 4th port in Indonesia alone to adopt marineM, Innovez One’s cutting-edge digital solution to optimise its towage and pilotage operations.

by Marine-Pilots.com - published on 9 February 2021

According to "Buchan Observer": Peterhead Port Authority has introduced remote pilotage for selected vessels entering the harbour as part of a package of measures designed to reduce the risk of staff and users contracting the Covid-19 virus.

The crew from Rescue RS 172 in Norway at sea trial with Humphree interceptors in "Active" mode. Storm outside Hvaler, Norway.
”Our job is to be there for people at sea in any condition. No system can eliminate motions from a roaring North Sea, what Humphree does is to give us the best possible control of our workboats, a system that makes a real difference to get the job done.”
Knut Hveding, Manager New Builds
Norwegian Search and Rescue team