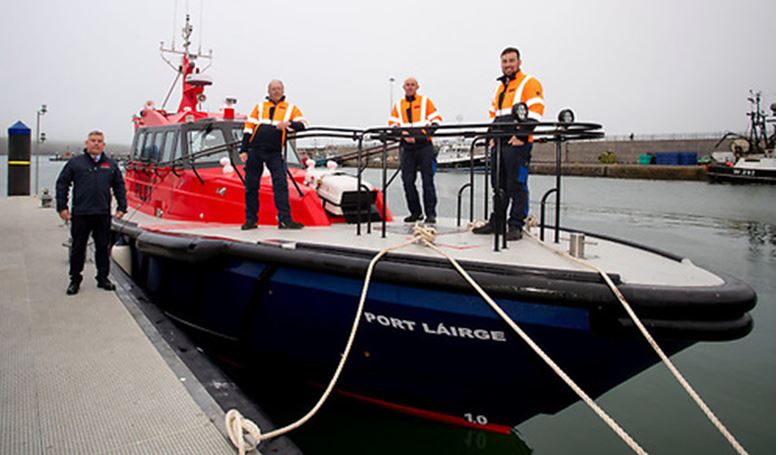 THE 15-metre-long ‘Port Láirge’, the Port of Waterford’s new Pilot Boat, was received by crew at the Dunmore East pontoon this (Friday) morning, two years after her commissioning.

The self-righting vessel, capable of recovering is capsized by a sizeable breaking wave, has been named in honour of the famed dredger which served on the River Suir until the 1980s after 70-plus years of service.

The ‘Port Láirge’, which will provide safer working conditions for personnel, replaces the purpose-built ‘Dun Mór’, which was designed and assembled by Halmatic in 1996. The Port of currently operates two pilot boats, one based in Dunmore East – its primary boarding position where the Port Láirge will be berthed – and the other at Passage East.

The vessel is powered by a pair of Scania D13 500hp engines, has an operational speed of over 25 knots and can, with comfort, carry five pilots and two crew.

“We, along with the maritime community here in Waterford, are delighted with the new addition to the fleet of port vessels,” said Port of Waterford Harbourmaster, Captain Darren Doyle.

“The work of the pilot crew is highly skilled and it requires a state-of-the-art vessel to ensure that this work can be carried out year-round in all weather conditions.”

The ‘Port Láirge’ pilot boat represents a €1 million investment by the Port of Waterford.
Captain Doyle added: “Shipping companies are commissioning deeper vessels for larger cargo loads and therefore the requirement of a well-equipped vessel for our skilled Pilot crew is essential in order for them to be able to carry out the operational and navigational requirements to get these vessels in and out of port safely.”

The four-strong pilot crew will now train on the Port Láirge vessel ahead of her officially enter service over the coming week while the Dun Mór is retired.

Boatbuilder Frank Kowalski MD of Safehaven Marine, based in Youghal, piloted the new boat on her maiden voyage to Dunmore following the completion of her sea trials. The Port Láirge is the 48th pilot boat Safehaven have supplied to ports across the world.
For further details see

Gladding-Hearn Shipbuilding, Duclos Corporation delivered a Chesapeake class pilot boat to the Seaway Pilots Inc. in Cape Vincent, NY. The Seaway pilots navigate ships in and out of the ports and harbors of the St. Lawrence Seaway between St. Regis, NY and Port Weller on Lake Ontario.

Ship spotting at Kobe and Nagoya Japan featuring some cargo ships & boats (Port code: JPNGO & JPUKB). By the way, if you are new to this Channel, and if you like airplanes, ships & vehicles, please do consider hitting the LIKE & SUBSCRIBE button, as well as the bell button so you'll get notified once I upload similar videos. Enjoy the video. Salamat at Mabuhay! Ship spotting South Korea: https://youtu.be/C1ktzbWNMKM Ship spotting Singapore: https://youtu.be/H_ettPmU5fU Pilot Boat of New...

Perfect Manoeuvre. Maybe it is Kieler Förde or Travemünde but in an any case the Baltic Sea. Greetings to NOK II !

In July 2021 DACOMA launched a new EU project: AMCOSTAR. Amcostar is a Eurostars/Eureka Network funded Eurostars project on Adaptive Control of Airkeel vessel stabilizer systems. The consortium partners, DACOMA ApS in Svendborg (DK), Syddansk Universitet - University of Southern Denmark in Sønderborg (DK), and Automasjon & Data AS in Stavanger (NOR) and Tuco Marine ApS - ProZero Workboats (DK) in Faaborg, will optimize, test, and demonstrate an adaptively controlled Airkeel stabilizer on a...