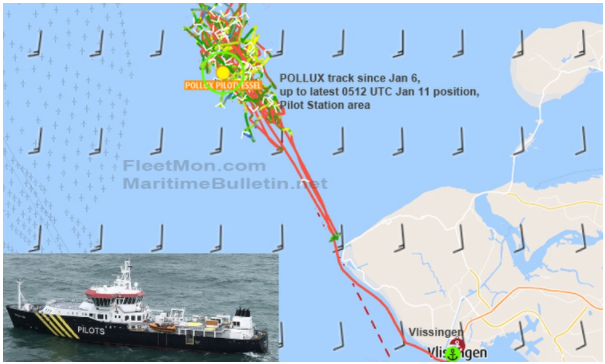 First text and photo by Fleetmon

All 5 crew of pilot vessel POLLUX, Dutch Pilotage Service, came up with positive test after self-testing on 9 January 2022.

POLLUX is ordered to stay within boundaries of pilot station in North sea NW of Vlissingen, in a status of total isolation. POLLUX will be allowed to dock at Vlissingen, where the crew will be properly quarantined and kept in isolation. Pilots meanwhile, have to use pilot tenders and boats, while weather permits, taking risks and endangering themselves.

Correction contrary to our first information: There is no Belgian ship coming as a replacement! The POLLUX is already back in port and has been replaced by the PROCYON. The crew of the PROCYON agreed to go on board a few days earlier to ensure that the pilotage can continue in a safe manner. Kudos to the pilot vessel crews!!.. The SWATHs and pilot tenders also worked hard to make pilot transfer operations possible.

Loodswezen - NEDERLANDSE LOODSENCORPORATIE
Editor's note:
Opinion pieces reflect the personal opinion of individual authors. They do not allow any conclusions to be drawn about a prevailing opinion in the respective editorial department. Opinion pieces might be deliberately formulated in a pronounced or even explicit tone and may contain biased arguments. They might be intended to polarise and stimulate discussion. In this, they deliberately differ from the factual articles you typically find on this platform, written to present facts and opinions in as balanced a manner as possible.
What's your opinion on this?
Login or register to write comments and join the discussion!
Read more...

Video by Safehaven Marine / Frank Kowalski
Here’s a cool video of the latest Interceptor 48 pilot boat we’ve launched for the Gdynia Pilots in Poland. We captured some nice alongside ship footage during the sea trials and had a chance to test out our new drone ‘catch net’ on Thunder Child.

View from the Bridge as the pilot navigates our 24,000 TEU vessel through the busy shipping channel safely to its berth. HMM thanks all the Pilots, Tug-Masters and Berthing Gangs for their important role in the safe passage of our fleet.

(Please note: Anthony F Hoy has CASA Operational Certification for UAV Aerial Photography & Aerial Survey).
The Svitzer Marloo, a Z-Tech 2800 ASD Tug, is one of the few vessels in the world to regularly use the complex and potentially dangerous Centre Lead Forward manoeuvre to assist inbound and outbound bulk carriers in the execution of a 110 degree turn on entering and leaving Port Kembla. Tug Master Phil Jones explains how a dangerous maritime exercise, if properly executed, can deliver...

Tag along as we journey through Suez Canal into Mediterranean Sea.
The ship is on a 77 days voyage from Asia to East Coast United States in which we've taken the Suez Canal route. By using Suez Canal instead of around cape of Africa, this will save more than 5000 miles of fuel and time.
The time-lapse was taken over 16 hours.

This guidance is intended to remind seafarers and companies of the vital importance of adhering to the rules and established procedures concerning the provision of safe boarding arrangements for pilots.

The sun was out and was a beautiful day, I was searching for a light house in the area and there was one in Cameron, La. I started my way to the light house not thinking how bad Cameron was hard hit by two hurricanes. After a few dozen downed power poles I was met with the National Guard and the Po Po. Needless to say I turned around and I had passed the port so I decided to drone this area. Not a bad place and a ship was being assisted by two pilot boats. I never tire with maritime...