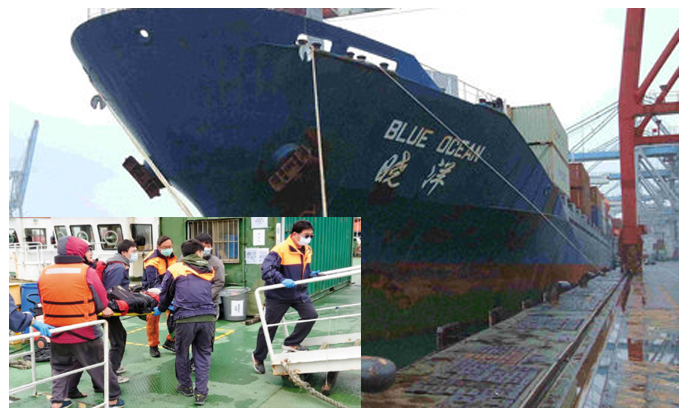 Around 11 am local time yesterday (21 February), a pilot fell into the sea while boarding the feeder vessel Blue Ocean, which is operated by Shanghai Jinjiang Shipping on a China-Taiwan service.

The pilot was retrieved from the waters and rushed unconscious to hospital, but died. Taiwanese media reports indicated that Chong lost his balance due to strong winds amid the north-eastern monsoon season.

Wind strengths were rated level 6 at the time, below level 8 that warrants suspension of ship operations.

Crew members on Blue Ocean pulled the pilot on board, but he had already lost consciousness. Attempts to revive the pilot with CPR were unsuccessful.

Taichung port has 18 pilots, and the last pilot fatality in the port was in 1983.

At the time of the latest accident, the 760 TEU Blue Ocean was entering Evergreen Marine Corporation’s Taichung terminal. Following the accident, the ship was moved to Taichung’s North Terminal. The vessel is supposed to head to Shanghai next.

Blue Ocean’s operator, Shanghai Jinjiang, is a subsidiary of Shanghai International Port Group and is mainly an intra-Asia carrier.

Taiwan’s Master Mariners Association chairman Hwang Yu-hui told Liberty Times that regardless of the ship size, vessel pilots should climb the piloting ladder from the piloting vessel and then turn to the gangway to board the ship.

The Finnish special vessel "Meri" collided with Holtenau High Bridge (Holtenauer Hochbrücke) over the Kiel Canal early on 30 Nov 2022 morning at around 4.37 am.

A marine pilot who sadly died after a ‘fall from a pilot ladder’ in the Humber Estuary has now been named. Video credit: BBC Look North/BBC News Hub

Following a surf riding and broaching incident and subsequent collision by an experienced vessel operator, QinetiQ have been undertaking extensive investigations into the risk mitigation and safety management of pilotage operations. This presentation looks to discuss the risks presented during pilotage services, and provide a critical review of vessel design and service delivery approaches to understand the potential risk mitigations and management of pilot boat safety.

This is a video about a ship berthing in Durban, a beautiful city in South Africa. I made a musical timelapse and wanted to share this with you.
Hope you enjoy the video and please do leave feedback, and also like, share & subscribe.
The music used in the video is - 'Dreams Pt. II by Lost Sky'
https://www.youtube.com/watch?v=L7kF4...

A unique 3D video endeavoring to raise the awareness of the seafarers about a very important, critical, and essential piece of equipment on board. Basic in design, but high on purpose, the mistakes incorrect handling of this equipment continue to result in Near Miss, Incidents and accidents.

In this video we are trying to show how a ship enters into Mombasa port through a canal and the procedure of berthing.