1000 cruise ships around… Are their pilot transfer arrangements safe? 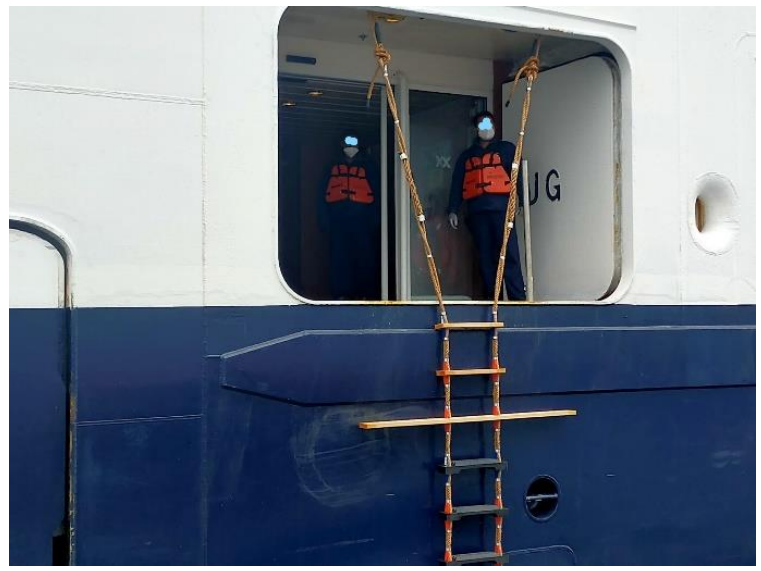 At the start of 2020 a pandemic we haven’t seen before in hundreds of years has struck the world, putting economies to a halt and had a devastating effect on the beautiful cruise business.

International travel was hard or even impossible, crews were stuck on board for many months past the duration of their contracts, many people died or got severe illnesses and lot of people are still dealing with the consequences of COVID today. Luckily today we all are getting back on our feet, trade is picking up again and let’s all just hope we can leave this page behind us.

Also, the cruise business is picking up again, even though a lot of cruise vessels have been scrapped over the past few years and thousands of people had lost their jobs consequently. As from now many people can now experience the wonderful travel on a cruise ship again!

The vessels that were able to continue supplying the world had the deal with a lot of regulations around COVID, IMPA was surprised and happy to see that in the blink of an eye all vessels worldwide had procedures around COVID, but that it seemed almost impossible over the past years to get pilot transfer arrangements up to standard over......... ( IMPA et al).

A non-compliant arrangement, covid restrictions still in force obviously Facemasks do not only stop covid, but also rule out the necessity to blur a photo

A non-compliant arrangement, covid restrictions still in force obviously Facemasks do not only stop covid, but also rule out the necessity to blur a photo

I did have the expectation that during the extended period in which especially cruise ships have been laid up, efforts would have been made to improve the pilot transfer arrangements (pta) on these vessels and in this article I would like to address the dos and don’ts on pta’s pilots encounter on a daily basis on cruise vessels. I hope it will help you as a pilot/crewmember/surveyor/auditor/inspector etc etc to commute in a safe way.

Now the cruise business is re-starting I received quite a few photos on the pilot transfer arrangements they have rigged, and to my surprise, not much has changed unfortunately….

Another non-compliant setup, dancing on the ceiling

Another non-compliant setup, dancing on the ceiling

In the photo above we can clearly see the following non compliances:


You probably know IMPA conducts a safety campaign om pilot transfer arrangements each autumn. Herman Broers  (www.pilotladdersafety.com) has made an analysis of the results of the last 5 safety campaigns to see if things are improving or not on this matter.

Year after year it seems that, despite the efforts of many, pilot transfer arrangements continue to be non-compliant. On passenger vessels we notice a variation between 7% and 21% non-compliancy. It must be said that the last 2 years could be disturbing the overall results: cruise business was down due to Covid. In total the average in noncompliance according to IMPA is around 18%. In my own tally, published weekly on social media, there is a non-compliancy of over 50%. This number is backup by the peer reviewed scientific paper “Snakes or Ladders” (E. Rattray et al).

a gift that keeps giving unfortunately…

a gift that keeps giving unfortunately…

A better setup yet still non-compliant

A better setup yet still non-compliant

At the setup above you can see that some (simple) changes have been made to get it right. The noncompliance you can spot is about the manropes being attached to the top of the stanchions:

SOLAS ch.V reg 23 rule 7.1.1 states that the manropes SHALL be secured to the deck.. That’s fully understandable of course, yet the pilot ladder poster tells us something different:

Again, coming down from the deck-head

Again, coming down from the deck-head

The setup above… again the ladder comes down from the deck-head and we have already explained the consequences of it. When one of the cruise companies was contacted about their unsafe pilot transfer arrangement, the reply was that the vessel was build in 2004 and therefore did not have to comply due to a grandfather clause in SOLAS ch.V reg 23 and that IMO A.1045 was not valid because they were supposed to be under IMO A.889….

First, it is rather dreadful that a company that transports 1000s of people on a daily basis is hiding behind a grandfather clause (just for the record: there is no grandfather clause in the above- mentioned IMO recommendations…. IMO A.889 had been revoked when IMO A.1045 came into force.)

In this particular case I would just refer to rule 2.1 and 2.2 from SOLAS ch.V reg 23: “All arrangements used for pilot transfer shall efficiently fulfil their purpose of enabling pilots to embark and disembark SAFELY.” Is this setup safe? No, it is not.. Don’t use it…

One of my contacts told me that should he reject a cruise vessel due to a non-compliant pilot transfer arrangement, his head would be on the chopping block….. A rather disturbing statement! I fully understand the economical pressure is tremendous, which basically means safety first….after profit.

Knowing the importance of arriving and departing on schedule for cruise vessels, would urge these vessels to rule out anything that might lead to delays… Further down this article I will mention something about a cruise company that fully understands the importance of correct pilot transfer arrangements and they took the time to convert them into compliant and safe ones..

Besides all the above, you can also see the ladder isn’t against the hull: ship’s fendering prevents that. Also, this can prevent the safe approach of the pilot launch and therefore should be cut back for at least 6m. (IMO A.1045 rule 6 and SOLAS ch. V reg 23 rule 3.3.1.3)

In the photo above, which is a similar vessel as a bit more up in the article, we can clearly see some adjustments have been made: stanchions are in place (are they 70-80cm apart from each other??), but can someone climbing the ladder use them? In my opinion it is good practice that these vessels are thinking about adjustments and executing them. Should they have gotten into the rules and contact the right people, it would have been correct already; now still further adjustments must be made. Again the ladder is not against the hull due to belting/fendering.

One of the leading classification agencies told me that in the past they approved systems where the ladder isn’t secured to the deck, but in the present time it absolutely will not be approved anymore. Good to have class on the same page! Would this mean that at future class surveys these arrangements would be banned? I would certainly hope so.

On this photo at least the ladder is secured to strongpoints on deck, and the correct stanchions are in place. Seems quite ok to use except for3 other non-compliances: we see (again) the manropes secured at the top of the stanchions. We already saw the cause of this practice and besides that, they have covered the side ropes for protection.. It is not allowed because IMO A.1045 states that the side ropes must be of uncovered rope. When the side ropes are covered, it is not possible anymore to see whether they are damaged or not. Another point is that covered side ropes don’t dry but stay wet.. This will cause rot and rapid deterioration of the side ropes. We see here the ladder is suspended over a sharp deck-edge, which probably is the reason they have covered them. An easy solution to

this problem is the so called ‘fish plate’( a piece of half round pipe to guide the ladder down). And finally the adder is (yet again) not against the hull due to fendering/belting.

A while ago I was approached by a deck officer who serves on one of the well known cruise liners. He was looking to improve their pilot transfer arrangements. To accomplish this, the officer had written a notice that was sent to all vessels in their fleet, explaining how to change non-compliant set-ups into good ones. He has used several sources in his research and of course listed them in his article.

By now all their arrangements are compliant! Way to go!!

To end this article, we can draw some conclusions:


And finally, of course I would like to make some recommendations on how to improve pilot transfer safety (not just for pilots, but for anyone who might have to use these arrangements).


I did not refer to ISO799-01 and MED4.49 in the article because not all (EU) countries accept these as a standard to comply with.

I hope you have enjoyed reading this article and that it will help you to increase the safety of yourself as well as the people around you. Please stay safe everyone and keep coming back home vertically rather than horizontally.

Dancing on the ceiling again…..

Dancing on the ceiling again…..
Editor's note:
Opinion pieces reflect the personal opinion of individual authors. They do not allow any conclusions to be drawn about a prevailing opinion in the respective editorial department. Opinion pieces might be deliberately formulated in a pronounced or even explicit tone and may contain biased arguments. They might be intended to polarise and stimulate discussion. In this, they deliberately differ from the factual articles you typically find on this platform, written to present facts and opinions in as balanced a manner as possible.

René Hartung Lotsenbrüderschaft NOK II Kiel / Lübeck / Flensburg, Germany
As you said it: so much money involved, but that’s were some of them try to safe some.
1
Read more...

Video Cadet Doyle boarding his ship from the pilot boat

Cadets get a wide variety of experiences at Great Lakes Maritime Academy. Glad this was captured to show the viewer what it is like boarding a vessel from a pilot boat.

Editors Note:
Safety is different
One comment on YouTube on this video:
"No hard hats, no Hi-Viz clothing (in case pilot falls in) the one at 5:16 has not even got a life jacket - absolute cowboys!"

Video Pilot boarding in the ice

Another video by Knud Benedict: This movie reveals some practical insight into regions of course stable / unstable conditions under wind. And I dare to say you can get some insight into other stability types and analogies, too!

MOSES (autoMated vessels and supply chain Optimisation for Sustainable short sEa Shipping) aims to improve the SSS component of the container supply chain through a series of innovations including innovative vessels and optimisation of logistics operations:

Article Latest Edition of "The Pilot" by UKMPA released
105

Article A review of the ship’s pivot point: Science, Maths and Observation’ Where is the centre of a ship’s rotation?
35