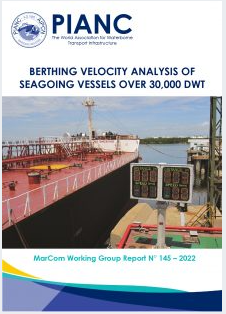 Section 4.2.3 of PIANC WG 33 (2002) ‘Guidelines for the Design of Fender Systems’ advises, “Designers must consider that the design values for the approach velocity should be close to the expected actual berthing velocity. It is the task of the designer to obtain data on the local conditions and seek out vessel operators, port engineers, ship owners etc. to gain insight into the applicable conditions and to decide on the most likely and/ or appropriate approach velocity. ”

The available data on berthing speeds dates back to the 1970s and was derived from a limited number of vessels. With a change in naval architecture the dimensions of vessels are now much larger. Many of these vessels are manoeuvred by highly powered tugboats or have large bow thrusters or stern thrusters adding to the manoeuvrability. Additionally portable navigation aids, communication tools and other developments also assist during the berthing procedure of a vessel. Based on these developments there was a need to investigate and update the knowledge of the actual berthing velocities exhibited in ports around the world.

The objectives of this WG 145 were to review vessel berthing velocity data from various ports around the world. This design parameter has the greatest influence on the berthing energy and subsequent fender systems. Consequently, a great deal of data on berthing velocities was collected and a proposal of design values was made by statistically examination of the available data.

The berthing speeds which have been recorded can be used by PIANC Working Group 211 ‘Update of WG 33 – Guidelines for the design of fender systems’ to update the WG 33 report ‘Guidelines for the design of Fender Systems’. Additionally, the data also gives port authorities, terminal operators, consultants and related companies the possibility of improving the design of marine structures by themselves in the future through recent data acquisitions and additional measurements.

The scope of this Working Group report is limited to the review and analysis of certain vessel berthing velocity data as described above.

During the meetings of this Working Group several other issues were raised in relationship to the design and independent testing of fenders, the influence of handling the berthing ships on fender design, and the design of fenders for berths in restricted channels and/or basins.

Furthermore, the guidance with regard to the performance of fenders, independent test methods of rubber fenders and partial factors derived using reliability methods should be considered in the design method for fender design.

These aspects have not been covered in Working Group 145 and will be discussed in the report of Working Group WG 211, currently (2020) in preparation

Login or register to write comments and join the discussion!
MH
Mike Harrison United Kingdom
Great to see you publicising the work of PIANC WG145. As co-chairman I can say how dedicated and through the entire committee were in investigating berthing speeds with some very interesting findings that were not entirely anticipated, but borne out but the thousands of sets of data analysied. The report is free to PIANC members and the organisation is always looking for new members with skills to contribute - including pilots who are the key ingredient that bridge the gap between naval architects and civil engineers. Any questions and I'll be happy to do my best to answer, of point you in the direction of someone who can. Thanks for promoting the WG145 report.
1

Nasir Khan Saudi Arabia
The book is free of charge to deliver or have price demand?

This safety video examines the safe set-up of pilot ladders and details the safety checks that should be carried out before using a plot ladder to ensure a safe boat transfer.

Article Education And Training Of Pilots In The Netherlands
547