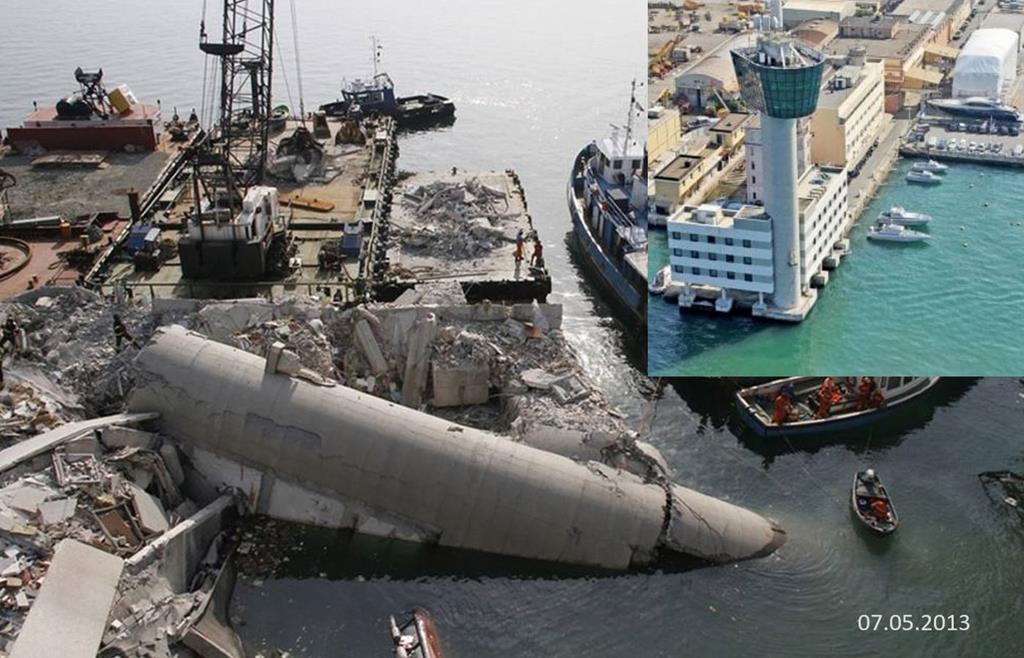 GENOA - Seven years have passed since the tragedy of the Torre Piloti in Genoa. It was almost 11 pm on May 7, 2013 when the vessel "Jolly Nero" impacted against the structure of the port at hit the pilot tower. The collapse caused the death of nine people while four others were injured. Seven years after that tragedy the city remembers the victims with a ceremony.

Two sailors laid a crown at the Stele dedicated to the victims, in front of the Harbour Master's Office. Admiral Nicola Carlone, the President of the Liguria Region Giovanni Toti and the Mayor of Genoa Marco Bucci will observe a minute's silence. At the exact time of the collision at Molo Giano at 22.59 a.m. a crown will then be placed, there will be a blessing and a moment of recollection by the authorities. The sirens of all the ships present in the port and the dependent naval units will sound in unison.

3D simulation of the accident

Additional information translated automatically from ShipMag.it:
The tragedy of the Torre Piloti in Genoa risks having heavy judicial consequences. The Public Prosecutor Walter Cotugno has asked for the sentence to five years in prison for the admiral of the Coast Guard Felicio Angrisano, former commander of the port of Genoa and former commander general of the Corps of Harbour Master's Offices, as part of the trial on the location of the pilot tower, the structure demolished on May 7, 2013 after the collision of the ship Jolly Nero. In the accident, many people lost their lives. This is the highest demand compared to those for the other 10 persons accused.

"For Angrisano a double responsibility exists - it has explained the pm in the indictment - as commander of the port and as employer. It had to be able to verify the risk and to face it, cost what it costs. Sure, perhaps if it had made to go down those boys from the tower it would have meant to give of the sleeve of unconscious to the predecessors... and perhaps doing this it does not become general commander".

In addition to Angrisano, according to Sscolo XIX, another 10 convictions and an acquittal have been requested. In particular, the pm asked for three years and four months for Fabio Capocaccia, former commissioner of the autonomous port committee; two years and six months for Angelo Spaggiari, structuralist; four years for Paolo Grimaldi, engineer; three years and four months for Ugo Tomasicchio, former president of the section of the Superior Council of Public Works; three years for Mario Como, structural engineer; one year and four months for Paolo Tallone, officer at the harbourmaster's office; three years for Giovanni Lettich, of the pilots' guild; one year for Sergio Morini, also of the pilots' guild; two years for Gregorio Gavarone, of the reunited tugboats and six months for Roberto Marzedda, also of the Genoese Tugboats. He asked for absolution for Edoardo Praino, a former official of Cap.


Watch Original Video
What's your opinion on this?
Login or register to write comments and join the discussion!
Read more...

In Germany a total of 16 new corona cases were reported on Friday morning. Ten of them on the two Rostock Aida ships, six more in Schwerin.

The need to hold such a webinar was felt from the interaction over several months of AIMPA members through its President, Capt. Gajanan Karanjikar, with Capt Simon Meyjes and Capt.Ravi Nijjer - both instrumental in the thorough upgrade of pilotage operations Safety management systems in parts of Australia. From these interactions, AIMPA has come to the firm conclusion that a thorough upgrade of maritime pilotage management systems in India is necessary. Holding a webinar would be a good...