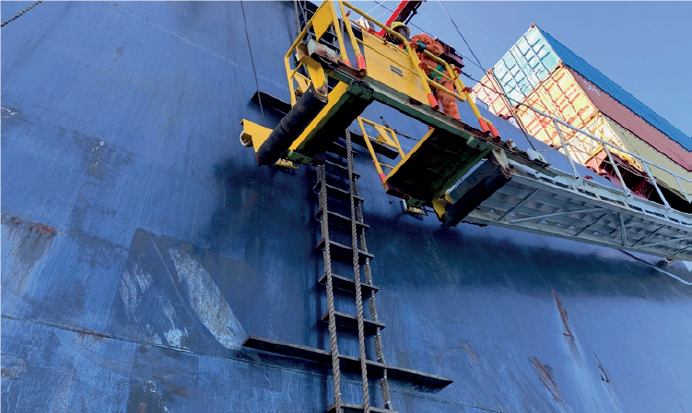 This month’s article has been written by a senior member of the New Zealand Maritime Pilots Association (NZMPA). Whilst some parts are specific to New Zealand the vast majority of the issues and points raised are applicable on a global basis. Equally, a large portion of the initiatives introduced by the NZMPA for implementation within their sphere of influence have been introduced by other maritime pilot associations around the world.

In recent years, the NZMPA has undertaken to implement a number of steps and initiatives in relation to pilot boarding safety. In following this process, we have identified two areas of concern – these being non-compliance by design (cases such as trapdoor arrangements or other shipboard design deficiencies not necessarily related to the crew), and non-compliance by ignorance (cases where the crew show a complete disregard to pilot safety, regulations and the condition of their boarding arrangements).

The initiatives developed are designed to cope with both areas of concern, and in NZ we are now starting to see positive results. In addition to regular engagement with members and industry stakeholders we are doing the following:

Pro-active engagement with our regulator. Here we are engaging in high level discussions around policy, regulation and education.
A successfully implemented online event reporting system. To date, pilot ladder related issues are the most common report type, with container vessels being the most common vessel type reported.
A published NZMPA Safe Pilot Transfer Good Practice Guide
Design and publication of the 2020 Pilot Pete’s Pilot Ladder Tips calendar
Development of descriptive guidance notes designed to educate and clarify rule requirements and be an aid to masters & pilots in demonstrating compliance vs non-compliance. A trapdoor PBA advisory notice is about to be published here.
To give weight to our campaign, in November last year Maritime New Zealand presented the results of a pilot ladder focus campaign. What was discovered raised concern and highlighted the extent of the issue, with:

8% of all pilot boarding arrangements not properly inspected by crew
9% were of non-compliant construction
30% without mandatory records, and
40% of all pilot boarding arrangements improperly rigged or unsafe for use.
The next step for NZMPA is to issue a set of regulator-endorsed guidance notes. The first version will focus on accommodation ladders used in conjunction with pilot ladders.

The intention of the guidance notes are to be a useful tool for ship owners, operators, agents, ship masters, ports and pilots to determine compliance vs non-compliance within the framework of NZ pilot ladder regulations (Maritime Rule Part 53).

As the first set of notes focuses on accommodation ladders used in conjunction with pilot ladders, they relate primarily to combination and trapdoor arrangements. As an association we have been formally challenging trapdoor arrangements since early 2018 based on our local regulatory framework, which states ladders must be secured directly to the ship’s structure and not to the accommodation ladder.

We are now seeing positive changes in NZ where previously non-compliant ships are now presenting modified boarding arrangements to ensure compliance within the NZ rule framework. This drive ultimately culminated, last December, in the first ship being refused pilotage services by NZ ports for repeatedly presenting a non-compliant and unsafe boarding arrangement.
https://www.chirpmaritime.org/pilots-corner-a-perspective-from-new-zealand

Example of a compliant combination PBA with trap door.

Example of a compliant combination PBA with trap door.
What's your opinion on this?
Login or register to write comments and join the discussion!
Read more...

Opinion New guidance for PBAs with trapdoors. Released 4.11.2020 by NZMPA

New guidance for PBAs with trapdoors. Released 4.11.2020 at NZMPA Conference in Dunedin, NZ. Distinct difference to suggestions in many other countries, is that we challenge operators who have the ladder suspended from the accommodation ladder (gangway) and not secured to the ship. SOLAS states that pilot ladder shall be secured to the ship, and securing strongpoints, shackles and ropes shall be as strong as the sideropes.

Video Ever Forward Freed | What's Going on With Shipping?

Ever Forward Freed What's Going on With Shipping? April 17, 2022 In this episode, Sal Mercogliano - former merchant mariner and maritime historian at Campbell University - discusses the successful ungrounding of MV Ever Forward from its location outside of Baltimore and its movement to an anchorage off Annapolis. This video will be followed by another with detailed photos and videos once they can be compiled. #EverForward #Cheasapeake #Evergreen #container #containership #logistics...

A 42-years-old fisherman died after an accident at sea along the Navula passage in Momi Bay yester-day morning. Police spokeswoman said the victim was a passenger of a fishing boat.

A unique 3D video endeavoring to raise the awareness of the seafarers about a very important, critical, and essential piece of equipment on board. Basic in design, but high on purpose, the mistakes incorrect handling of this equipment continue to result in Near Miss, Incidents and accidents.