Lighter than ever
The instructions given by Nederlands Loodswezen to ship designer Camarc and shipbuilder Next Generation Shipyards had been clear: design and build a strong, waterjet driven, aluminium pilot tender that is much lighter than her predecessors. Mira weighs around 39 metric tons, whereas her predecessors weigh around 54 tons. Because of the lower weight, considerably less fuel is needed, which means the ship will emit less CO2 and soot. This makes her less harmful to the environment.

A class of its own
Mira - an M-class pilot tender - has the same hull as her L-class predecessors but is equipped with a so-called axe bow. This alone results in fuel savings of 3%. In addition, every single part of the ship’s design has been subject to careful examination to reduce weight as much as possible. Managing Director Willem Bentinck of Nederlands Loodswezen explained, "In total, Mira is about 15 tons lighter than her predecessors. This is equivalent to the weight of two adult elephants; you can imagine what a difference this weight loss makes in fuel consumption". The total fuel consumption of Mira is more than 20% lower than that of the L-class tenders, resulting in a significant reduction of CO2. 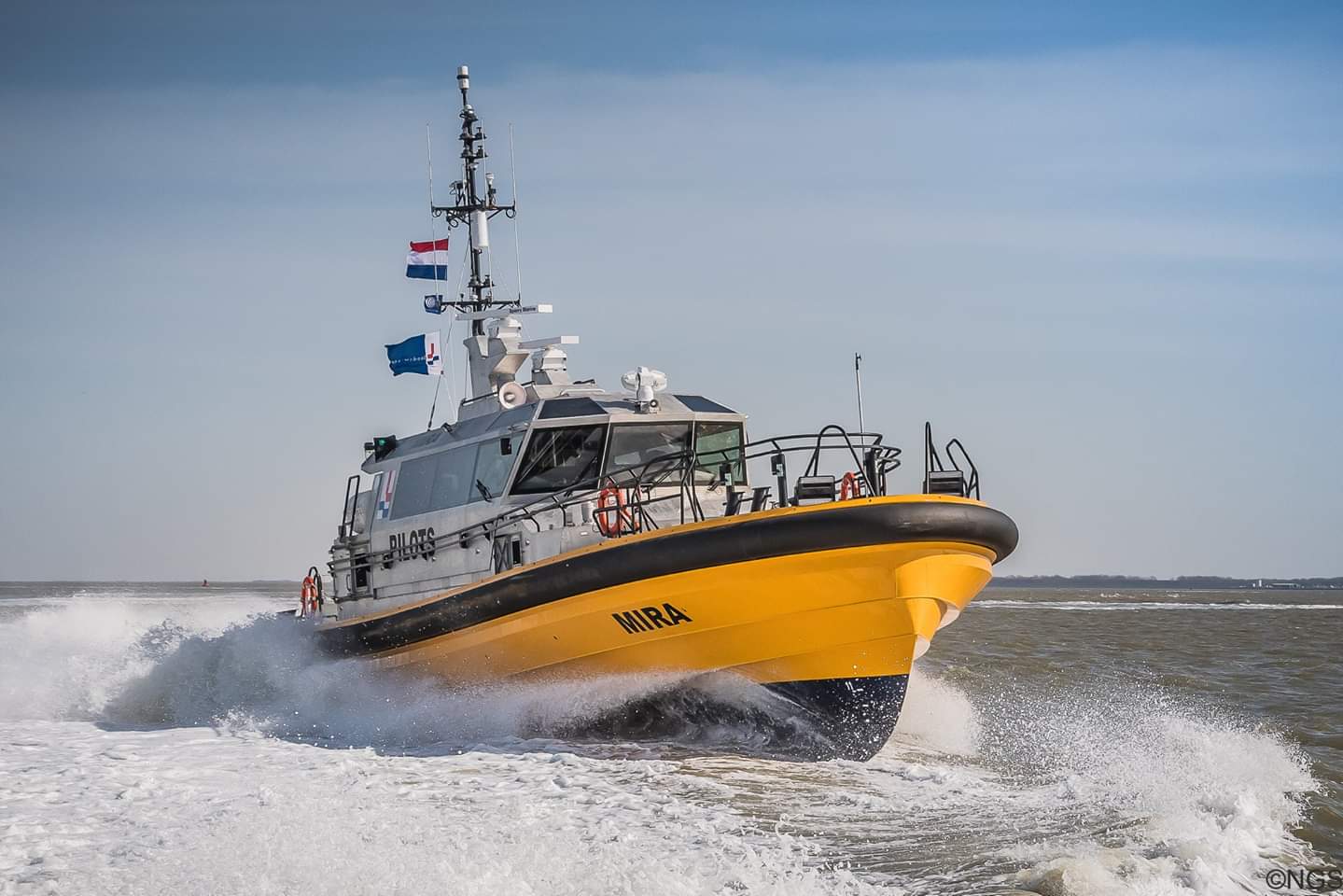 Fleet renewal
Nederlands Loodswezen’s fleet expansion is a multi-year investment programme. The fleet includes 15 waterjet driven tenders that are used for pilot embarkation/disembarkation to serve seagoing ships calling at Dutch seaports and at Flemish seaports on the River Scheldt. The new tender Mira will replace one of the Discovery class tenders now that they have reached their maximum lifespan.

Remark in times of COVID-19:
Due to the regulations concerning the Corona pandemic, the christening was held in presence of only a few people.

Company profile Next Generations Shipyards
Netherlands
Next Generation Shipyards
What's your opinion on this?
Login or register to write comments and join the discussion!
Read more...

Delivering the pilot to the Aurora Tanker in Brunei Darussalam.

Video Boarding via Tug Boat - Is this safe?!

A few shots from the day, with Elisabeth-S and H&S Fairness plus the pilot boat. I put music to it as it was such a windy day.

Stanchions therefore are an often-overlooked part of a pilot transfer arrangement and therefore I
want to give them more attention in this article. They proved to be the cause of a whole series of accidents, some of which were even fatal.

As part of our Port Perspectives series we have captured the perspective of what is like to work in Dublin Port from some key members of our team. This video features Robert Cox, a Marine Operative at Dublin Port Company. Robbie as he is better known provides an insight into his varied role at the Port from operating Pilot Boat Camac, delivering Pilots safely to vessels, to placing fenders at the quay wall no two days are ever the same! Robbie also captures some amazing images of Dublin...

Video Pilot of cargo ship Ever Forward, which ran aground in Chesapeake Bay last year, gives up license
56