Scientific Fact: The ‘traditional’ understanding of the ship’s pivot point is wrong!

The ‘lever theory’ that we know so well in ship handling is still correct but the point where the lever rotates is not at the pivot point position that we may have been traditionally taught or even “see” when a ship is turning and moving ahead (or astern) at the same time. In fact, the pivot point that we “see” is a trick of the eye, it looks like the ship is rotating about this point but in fact it is elsewhere, a point that you cannot see. 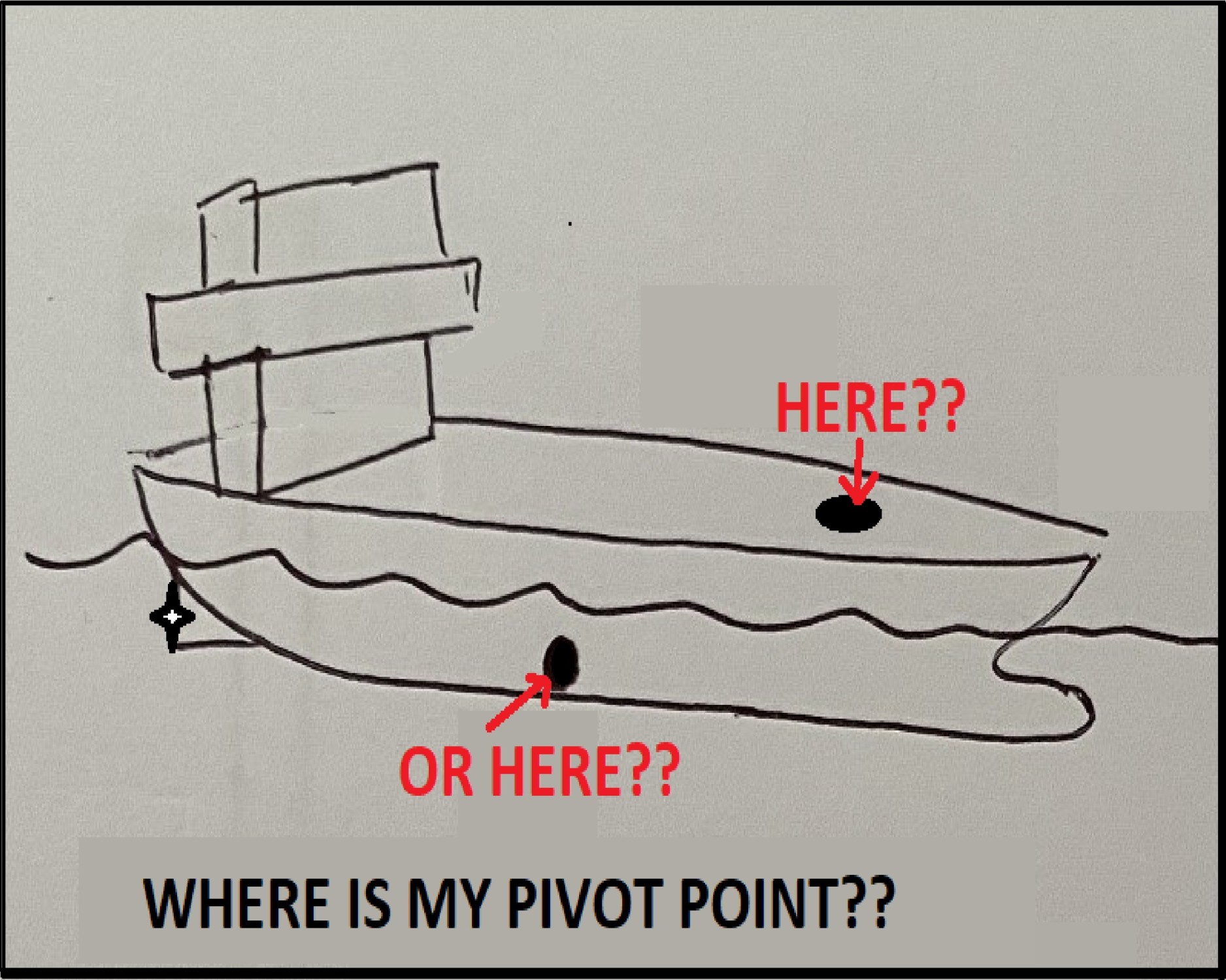 The question I asked myself was “So what? The ship is still rotating about a position somewhere about the ship even if it is not at the position that I understanding is the pivot point”. But then I realised (1) we as ship handlers have been operating ships on fundamentally incorrect principles (2) we can probably do more to a ship than we realise (3) it better explains why ships ‘do what they do’.

Archimedes ‘Lever theory’: A bar balanced on a pivot, the fulcrum. The fulcrum is the point where the lever turns or the rotation point. The effect of the lever depends on how much force is applied and where the force is in terms of distance from the ‘pivot point’. A lever can amplify force. 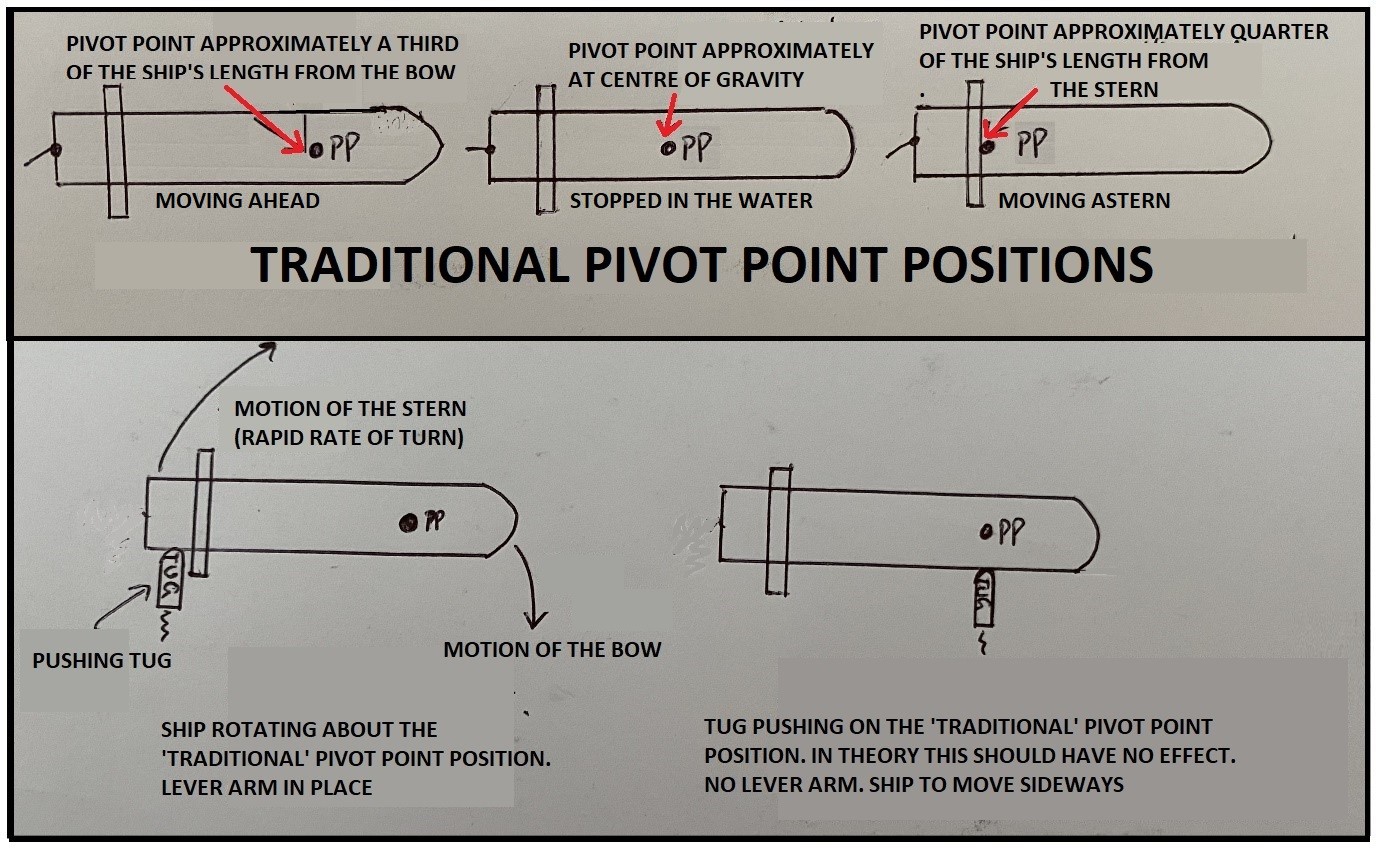 The ‘traditional’ pivot point theory of ships: The position of the pivot point on a moving ship should be right ahead or right astern depending on direction of motion but the friction of water causes a resistance therefore the pivot point settles in a position as indicated in the top diagram.

A tug pushing on a ship moving ahead using the ‘traditional’ pivot point theory: When pushing at a position away from the pivot point, such as right on the starboard quarter, it will cause the ship’s stern to swing to port and the bow to swing to starboard. The stern will swing with a rate of turn greater than that of the bow. This is still true even with the new pivot point theory.

A tug pushing at the position of the pivot point should have no turning effect because there is no lever, but instead may cause sideways movement of the ship if the force is big enough. This idea has been challenged by the new ‘pivot point’ theory. 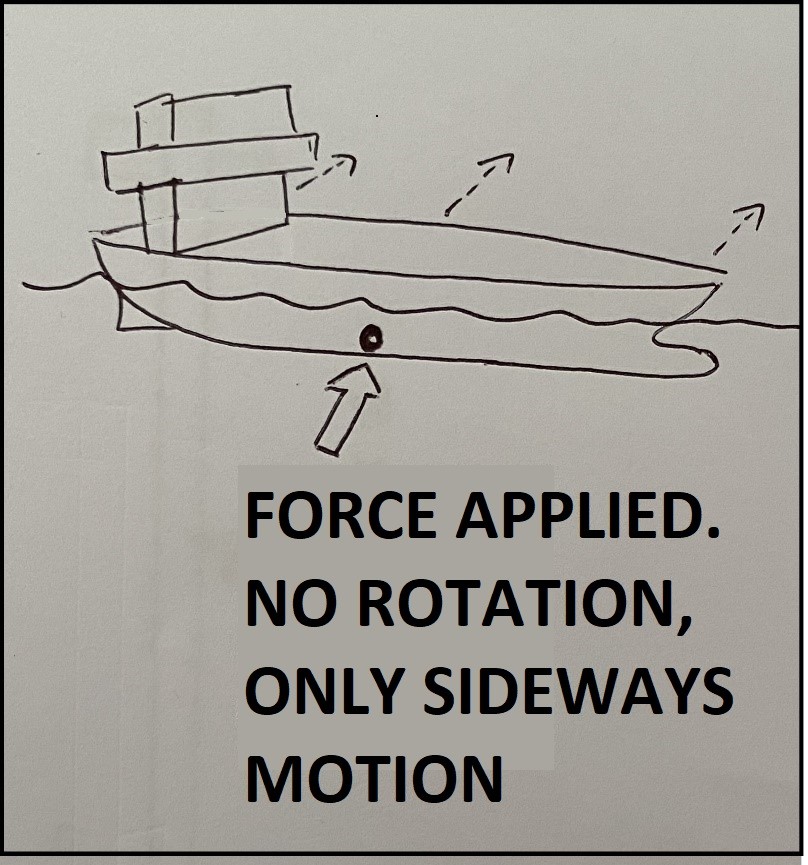 So, what about the pivot point that we “see”? A ship looks like it is rotating about a non-moving point on the centreline of the ship and not at the centre of gravity. Captain Hagues Cauvier, Dr S.G. Seo and Captain Paul Butusina provide a good answer.

Imagine a ship running dead slow ahead has a tugboat strapped to it port quarter and the pilot asks the tugboat to push on (or pull) with full power at right angles to the ship’s hull. This will cause two reactions in combination, rotation about the centre of gravity of the ship and sideways (lateral) or ‘sliding’ motion. As the momentum of the rotation builds it starts to appear that the ship is rotating about a central point but this central point is not at the centre of gravity of the ship but in a position that is away from the tugboat’s exertions, about a position that is 1/3rd of the ship’s length from the bow (if the ship was moving astern about a position that is 1/4th of the ship’s length from the stern). In fact, what is “seen” is concurrent sway, yaw and surge effect (aka drift, turn, forward motion) which appears to the ship handler as if the ship is swinging about a non-rotating point on the centreline of the ship if viewed against the water. This ‘visual’ position is mistakenly thought to be the ‘pivot point’ but in fact it is only the ‘apparent’ centre of leverage.

The trick of the eye: The six degrees of freedom of a ship; and a drawing demonstrating Captain H. Cauvier’s argument adapted from figures 4,5,6 and 7 from his article in UKHMA ‘The Pivot’. The ‘apparent’ pivot point is a combination of yaw and sway happening simultaneously and appears as if a part of the ship has not changed position in space. Dr Seo explains it as “the perception of two motions down to one motion”. Also, the diagram shows that the apparent pivot point will appear in a position away from the force being applied. 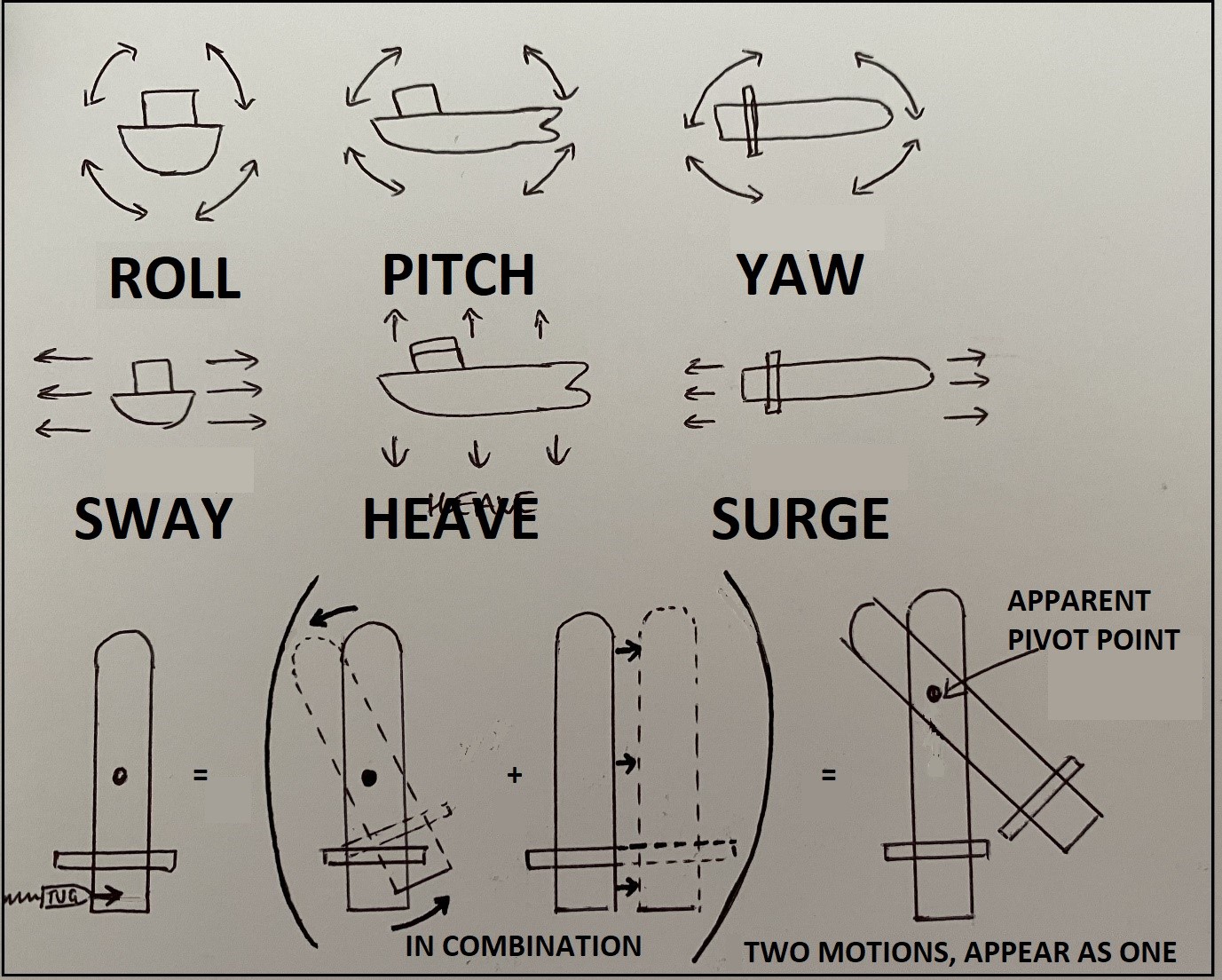 A verification experiment illustrated in Captain’s Hagues Cauvier’s article demonstrates the above. 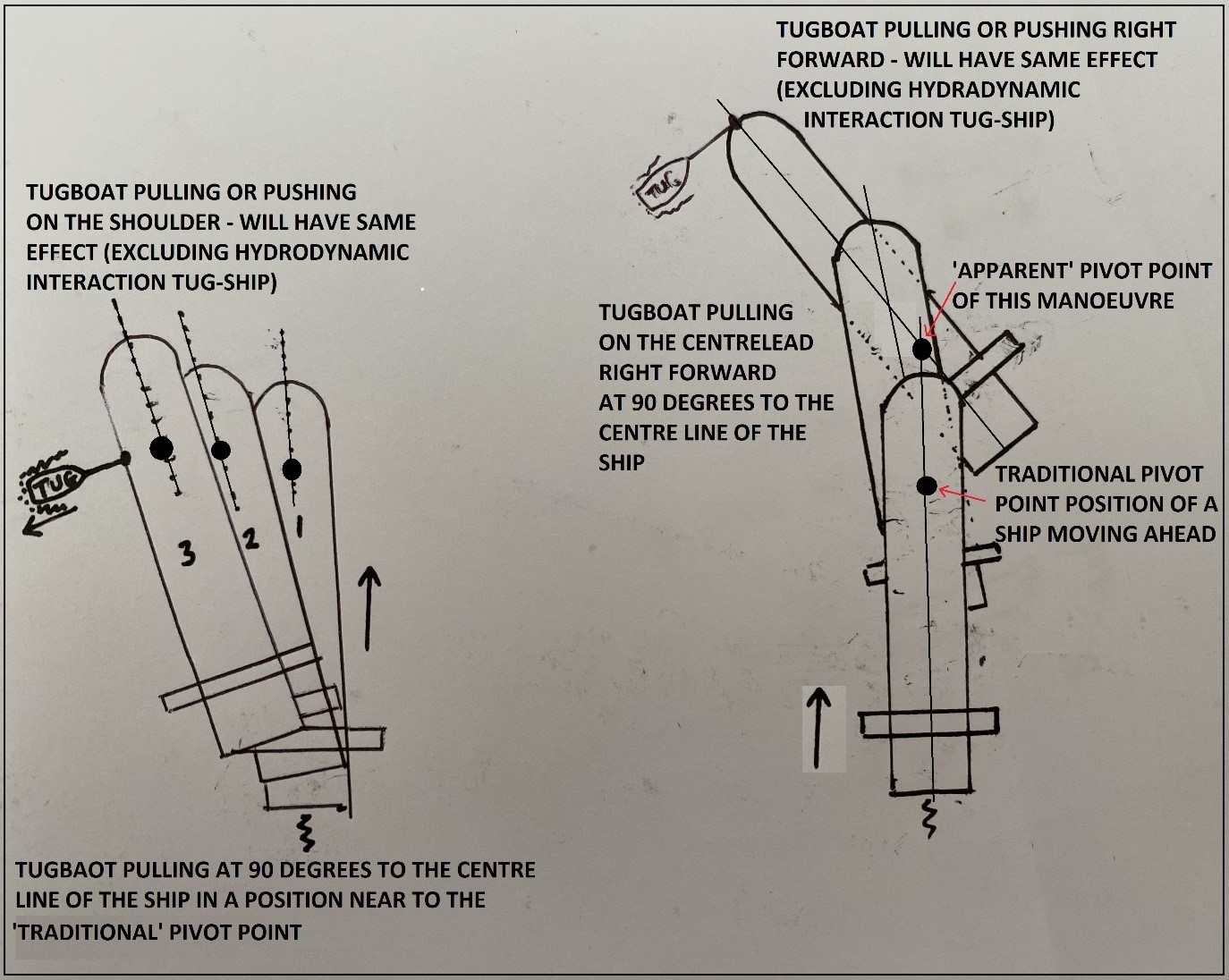 If a lateral force is applied right at the bow (or stern) of the ship the pivot point ‘appears’ in a position away from the acting force and not in the position expected from the ‘traditional’ pivot point concept. This strengthens the argument that it is a ‘trick of the eye’ and that the ship is in fact pivoting on another point.

The diagram also shows that when lateral (sideways) forces are applied to the ‘traditional’ ‘pivot point’ position of a ship moving ahead this does have an effect because the ‘real’ pivot point is further aft than what is “seen” by the ship handler. There is a lever.

Doctor Seong-Gi Seo’s scientific papers supports the above arguments with mathematical equations and further demonstrates that the ‘traditional’ pivot point is not the centre of the ship’s rotation. The paper also addresses other common ‘mis-understandings’ about the pivot point. He says that the pivot point does not move instantly but gradually, and it does not move toward the bow and stern depending on whether the ship is going ahead or astern but is in fact independent of ship’s motion. He also demonstrates that the ‘apparent’ pivot point of a vessel can be ahead of the ship and outside of the ship’s profile for some manoeuvres. 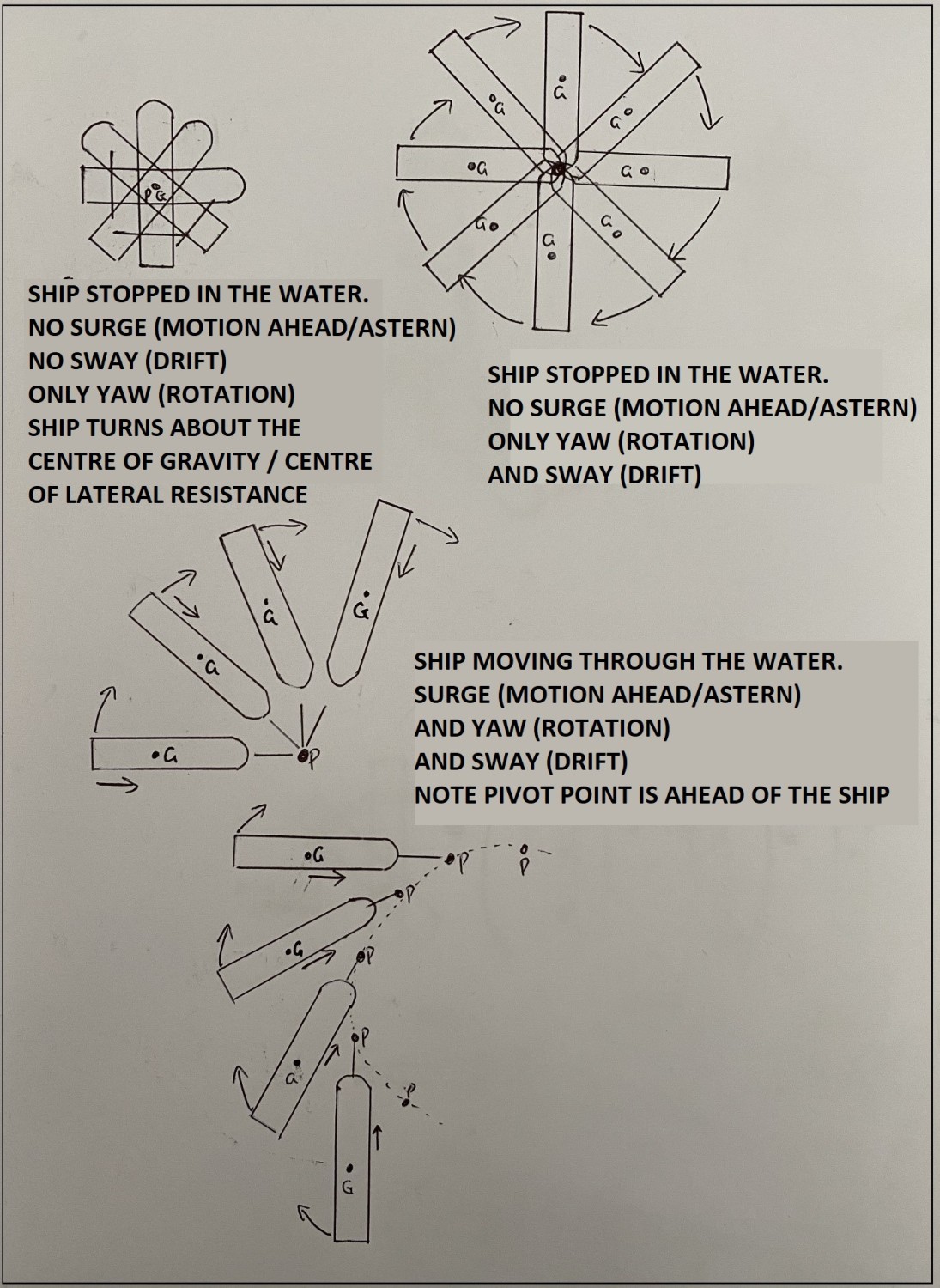 The pivot point of a ship stopped and moving through the water. Adapted from figures 8,9,10 and 13 in Dr. Seo’s paper published in the International journal of Marine Navigation and Safety of Sea Transportation in December 2016 (Volume 10, Number 4)

Editor's note:
Opinion pieces reflect the personal opinion of individual authors. They do not allow any conclusions to be drawn about a prevailing opinion in the respective editorial department. Opinions are usually deliberately formulated in a pronounced or even explicit tone and may contain biased arguments. They are intended to polarise and stimulate discussion. In this, they deliberately differ from factual articles you typically find on this platform, written to present facts and opinions in as balanced a manner as possible.

There are ten comments to this.
Login or register to view comments and join the discussion!
Read more...

Opinion A Corrected Version on Positioning of Pivot Point

by Prof. Kjetil Nordby Institute of Design - The Oslo School of Architecture and Design - published on 6 May 2020

Found on YouTube. Special thanks to John Redman and the "American Harbor And Docking Pilots Association".

The need to hold such a webinar was felt from the interaction over several months of AIMPA members through its President, Capt. Gajanan Karanjikar, with Capt Simon Meyjes and Capt.Ravi Nijjer - both instrumental in the thorough upgrade of pilotage