A Corrected Version on Positioning of Pivot Point 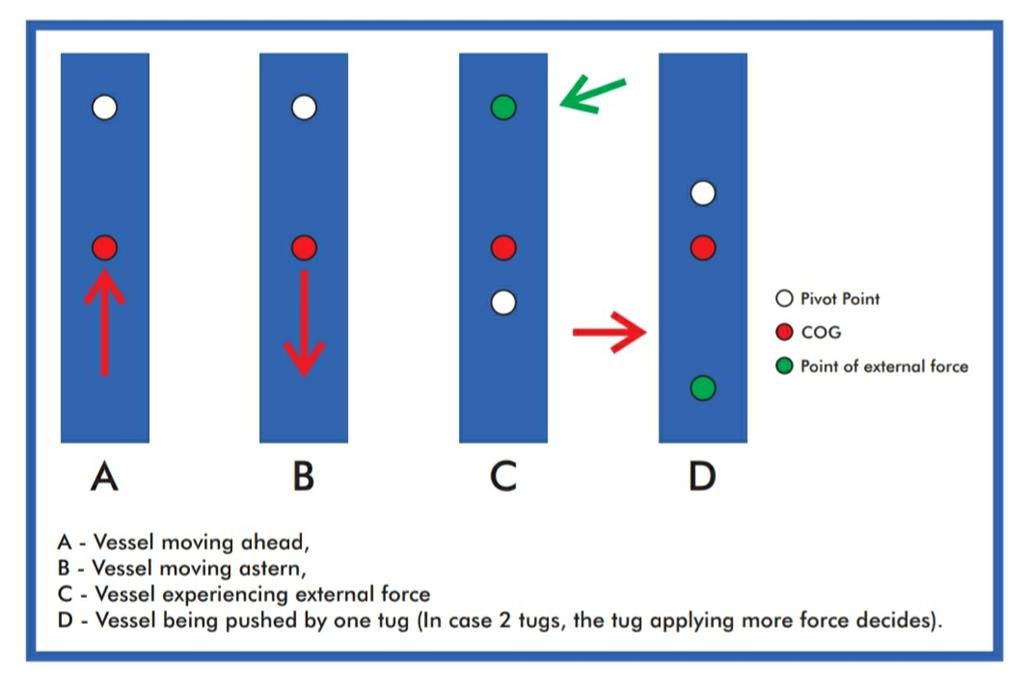 Understanding the fundamentals of the pivot point is highly required for understanding the alteration of the courses. Pivot point is an imaginary point on the vessel which turns on a circular path on the perimeter of vessel’s turning circle when the vessel makes a turn. The knowledge about the position of the pivot point in a manoeuvring situation provides the ship handler with the information on the geometry of motion of the ship. When sway and yaw occur simultaneously, a ship handler can only perceive the combined effect of drift and turn, which gives him a false impression that only a rotational motion happened about a certain point on the ship’s centreline. This apparent centre is called the Pivot Point of the ship. This is a simplified perception of two motions down to one motion.

We can understand the existence of pivot point mathematically as an imaginary point. Among all the points in the ship in planar motion, there is only one point on the centreline at which the sway and yaw completely cancel each other, thus making this point seem to be stationary. All other points appear to be turning about this point. This point is the Pivot Point.

Sway means the linear transverse (port to starboard) motion. This motion is generated directly either by the water and wind or currents exerting forces against the hull or by the ship’s own propulsion or indirectly by the inertia of the ship while turning. Yaw is the rotational motion of the vessel about the vertical axis. If the sway speed and yaw speed are known, the position of the pivot point can be obtained as the distance from the centre of mass (GP) using equation:

There are some traditional views held by ship handlers of the Pivot Point and also mostly found in the literature of books on ship manoeuvring. These views about pivot point are:


However, ship handling professionals, particularly the seasoned practitioners, find it very difficult to accept these findings.

Verification Experiment to establish the location of Pivot Point

A verification experiment was done in for a panamax vessel. The ship’s turning force was provided by setting the engine half astern. The propeller is right handed with fixed pitch. For the purpose of analysis, the whole experiment was divided into 8 time intervals. In each interval, the result was analysed calculating the position of the pivot point as the average in the interval. The positions are given as percentage lengths between the bow and the pivot point, to the length of the ship. The experiment shows plainly that the pivot point was at around 17% of the ship length from the bow. Near the end of the experiment, it is obvious that the pier is interfering with the water flow being created by the propeller.

Position of Pivot Point as deducted from the experiment

The exact position of the pivot point may be deducted from the following formulae. GP is the distance of the Pivot Point (P) from the longitudinal Centre of Gravity (G).

Where, GP – Distance between the GOG and PP,

Fr – Position of Resultant force on the vessel,

L – Length and B- Breadth of vessel

The interpretations of above findings are essential knowledge for the ship handlers. Above equation correlates some practical points which can be used by ship handlers during manoeuvring of ships are as follows:

The pivot point settles down at one point when the motion of a vessel becomes steady. All above observations are confirmed by pilots carrying out manoeuvring regularly on day to day basis. The understanding of above facts can be understood very well when vessel is making a astern movement at a certain speed aided by the tugs while keeping in a restricted and narrow channel.
Buy this book online
Editor's note:
Opinion pieces reflect the personal opinion of individual authors. They do not allow any conclusions to be drawn about a prevailing opinion in the respective editorial department. Opinion pieces might be deliberately formulated in a pronounced or even explicit tone and may contain biased arguments. They might be intended to polarise and stimulate discussion. In this, they deliberately differ from the factual articles you typically find on this platform, written to present facts and opinions in as balanced a manner as possible.

Login or register to write comments and join the discussion!
LV
Louis Vest Houston Pilots, USA
Sean - My experience has been that the pivot point changes rapidly as the ship changes from headway to sternway or vice versa and the position is right away near the bow or stern. You can see this when docking starboard side to with a right hand prop and no tug/thruster or when turning a ship with a bow tug/thruster and the ship stops and begins coming astern during the turn. If you take your attention away from the bow as you get sternway you can be surprised by how much difference that big lever arm makes. Used to scare the poop out of myself until I learned to anticipate that.
0
SO
Mr Sean O’Toole ABP - Associated British Ports, United Kingdom
The photograph of the Panamax ships are actually manned models from Solent University Ship Handling Centre https://www.solent.ac.uk/facilities/ship-handling-centre .
Undoubtedly it can be seen the PP is forward when initially coming astern when the rotation is caused by transverse thrust. However the PP will start moving astern when the vessel starts moving astern, how far is the question. Should the only force being transverse thrust I would say the PP when moving astern is possibly just aft of amidships. Add a bow thrust or fwd tug to increase the rotation, the PP will move further astern, use an aft tug then it will push the PP more forward. The PP is very dynamic and always gradually changing and as practical ship handlers we are in reality balancing all forces and driving the resultant to have a good outcome.
0
JW
Jim Wright Southwest Alaska Pilots Association, USA
Before tugs were available, Alaska pilots used this principle to undock vessels up to 100K DWT from berths where the mooring dolphins were inside the face of the berth. Often with little or no opposing current.
When all lines were reported in we would use an astern bell to get sternway on the vessel. As the midpoint of the vessel passed the knuckle on the berth, an ahead bell together with hard over rudder to begin rotating the stern toward the catwalk would be ordered. This order would also begin rotating the bow off the fenders while maintaining a foot or so clearance between the shell plating and the knuckle. From this point, judicious use of the engine and rudder kept the vessel rotating off and clear of the knuckle as forward speed was increased. This maneuver was effective with up to 30 knots of wind on the berth.
In later years it occurred to me that aft movement of the pivot point with sternway made this maneuver possible without laying back on the knuckle. Absence of stress was not guaranteed.
1

Captain Wade Armstrong Hawaii Pilots' Association, USA
Concur completely with Capt Lou Vest. I have also attended manned model schools at Grenoble and two in the US, and experienced the same conclusive demonstrations. My 30+ years of handling vessels of all sizes supported the traditional view of how the pivot point will act.

I fully agree with one statement towards the end that "A bigger block coefficient will cause the pivot point to be closer to the bow."
0
LV
Louis Vest Houston Pilots, USA
I attended the manned model ship handling schools in Grenoble twice, Poland once and Australia once. They all teach and demonstrate conclusively that when stopped the pivot point is at the center of lateral resistance. When the vessel begins to move forward the pivot point rapidly moves forward to a point about 1/5 to 1/4 from the bow. When coming astern the pivot point moves back to a point about the same distance from the stern. I spent 30 years docking ships of all sizes and used that information daily. After docking maneuvers I always graded myself by looking to see how the spirograph produced by my pilot software conformed to the docking plan I had mentally rehearsed before the maneuver. Those graphics confirmed over and over again that the pivot point acted as I had been taught.

Your article did not convince me that the pivot point acted any differently from that.
0
Read more...

Video A conversation about the Jones Act

Opinion The 2023 review of Pilot Transfer Arrangement Regulations, a chance for innovation?

In the spring of 2023, the IMO Sub-commission on Navigation, Communications and Search and Rescue (NCSR) may start a process of review and amendments to the SOLAS Ch V. reg 23

The Master and pilot are dependant on each other for a safe and successful beginning or end of a voyage. They are both operating in a foreign environment.

Qastor was first released in 1998 and has become the benchmark in pilotage software in the years to follow.

The software has evolved from being just a navigational aid to an essential tool to support the day to day activities of the marine pilot.