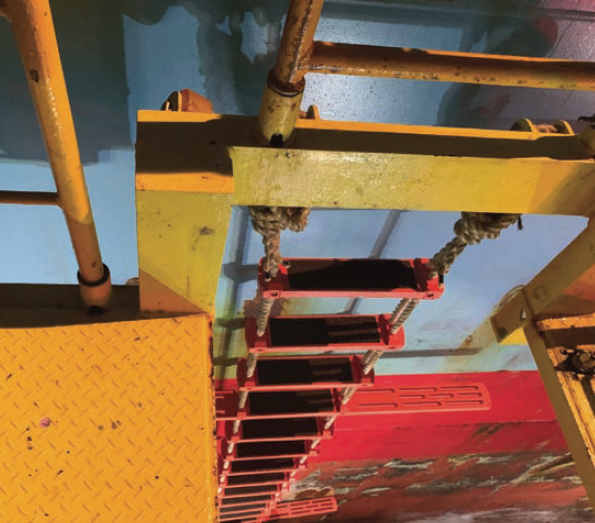 Like many seafarers I have long been a keen follower of The Nautical Institute’s MARS programme, and along with many other members I listened to the recent webinar on that topic. One theme which was repeated more than once was that it is better to learn from someone else’s misfortune rather than have it happen to you. Having personally been involved in two near misses resulting from unsafe pilot transfer arrangements in a relatively short space of time, I asked how experiences and knowledge specifically about pilot ladder safety could best be promulgated to avoid repeating common accidents or near misses.

For pilots the most perilous part of the day is often said to be embarking or disembarking from a vessel. Over the years there have been a significant number of pilots who have been injured or who have tragically lost their lives during pilot transfers. Pilot embarkation or disembarkation is on every occasion potentially an extremely hazardous operation; pilots are expected to transfer to or from vessels without delay during the day or night in all weathers, putting their personal safety at risk. Transfer methods have evolved very little with the passage of time, and although some pilotage regions employ helicopters for pilot transfer, most pilot transfer operations still take place between a pilot launch and the ship.

Readers of Seaways will hopefully be aware of the articles I have written on the subject of Pilot Transfer Arrangements and some will also be aware of the #dangerousladders campaign on Twitter or Facebook (see below). After my own two near misses, I began to question the arrangements being presented to myself and other colleagues around the world.

The need for safe pilot transfers is acknowledged within the International Convention for the Safety of Life at Sea (SOLAS), 1974 (as amended), which was adopted on 1 November 1974 and entered into force on 25 May 1980. Chapter V of the SOLAS Convention is concerned with Safety of Navigation, and Regulation 23, last revised in 2012, deals specifically with ‘Pilot Transfer Arrangements’. Compliance with SOLAS is not an aspiration, it is a legal requirement. And yet, lives continue to be lost from unsafe pilot transfer arrangements.

Following a request from the International Maritime Organization (IMO) the International Maritime Pilots Association (IMPA) have carried out safety campaign surveys in an attempt to keep a check on developing trends, including non-compliance with pilot transfer arrangements. The annual survey is conducted over a two-week period and usually receives between 3,000-3,500 responses.

Consistently (and in line with other independent surveys) year after year this survey records non-compliance rates of around 20%. Comparisons are often made between the shipping and airline industries. Would noncompliance levels of 20% with safety legislation be acceptable in the airline industry?

It is possible that the situation is even worse than these headline figures would lead us to believe. Since becoming involved with the #dangerousladders campaign, pilot Arie Palmers who is licensed for the Scheldemonden region, has been keeping records of all the pilot transfer arrangements he has encountered. While a single set of figures cannot be representative, his personal tally shows non-compliance levels of 57%.

There are legitimate concerns regarding the awareness of many pilots in respect of the regulations. It may seem strange but very few pilotage authorities have historically included pilot ladder requirements in their training regimes.

The rules – and the anomalies

Anyone studying the rules and/or following the #dangerousladders Facebook page will become aware of certain anomalies within the rules and differences with their interpretation. In short, SOLAS V Regulation 23 does not tell us how or where a pilot ladder should be secured to the vessel, except with reference to pilot ladders stowed on reels.

Guidance on pilot ladder securing does not appear in SOLAS, but is given in IMO Resolution A 1045 (27) which states; 2.1.1 The securing strong points, shackles and securing ropes should be at least as strong as the side ropes specified in section 2.2.

However, the fact that IMO Resolutions are guidance notes, and that some administrations do not consider them mandatory requirements is a consistent cause of confusion. It could appear that each vessel is given free rein to secure its pilot ladder in a manner it considers to be safe.

During my research I asked retired pilots who were involved with the IMO and IMPA why there is no guidance within the SOLAS regulations on how and where to secure a pilot ladder. The common answer is that certain levels of seamanship have to be assumed. My article ‘securing pilot ladders at intermediate lengths’, here on Marine-Pilots.com outlines some of the problems with this approach.

In plain language the IMCO Resolution A426 from 1979 and its subsequent revisions are recommending that pilot ladders should not be secured below the lower platform in a trap door arrangement.

Tragically, in December 2019 Captain Dennis Sherwood was killed during an accident using just such a ‘trap door’ arrangement where the pilot ladder was secured below the lower platform, making the transition from the pilot ladder to the platform a very unsafe manoeuvre (see photo). The vessel was built in 2007.

Because the requirement for the pilot ladder to extend above the lower platform is only a recommendation, albeit one which has been in existence for 41 years, there is apparently no statutory obligation to comply. New vessels continue to be delivered into service with pilot transfer arrangements which are not compliant with current regulations. When challenged by pilots the ship’s crew will often answer that the arrangement ‘is class approved’. Unfortunately, class approval does not always guarantee compliance with regulations.

Because of the inadequacies of SOLAS V 23 and a lack of understanding by many stakeholders, including ship designers, classification societies, flag state officials, ship companies and pilots, lives continue to be put at unnecessary risk.

While many of the perceived problems with pilot boarding arrangements are down to interpretation of the regulations by various industry stakeholders, it is clear that there are serious omissions within the current regulations. Clearly, the content of SOLAS V Regulation 23 and IMO Resolution A 1045 (27) are in need of review and substantial revision. The SOLAS Regulations are enacted through the IMO and changing them is not a quick and easy fix. Changes have to be made by the IMO and this can be a slow and laborious process, but that should not prevent an attempt to improve pilot safety.

Following my question during the online webinar, David Patraiko, the NI Director of Projects and the webinar session moderator invited me to contact him after the broadcast completed. David listened intently to my obvious frustrations. He offered the full support of The Nautical Institute in trying to rectify the current situation, whilst acknowledging that IMPA are the non-govermental organization (NGO) who represent the interests of marine pilots at the IMO. IMPA have their own widely experienced safety committee and an executive who will be involved in the debates at every stage.

Going forward it is anticipated the process will involve;

▪ Establishing absolute clarity on whether the issues are due to noncompliance with SOLAS orwith shortcomings in SOLAS itself. Objective justification is required for any new work at the IMO.

▪ Debate in various forums to achieve proposals which are both justifiable and acceptable.

▪ Preparation of draft amendments, revisions or additions to the regulations.

Even with a positive attitude and outcomes the process will take a number of years and all revisions will be only applicable going forward from the implementation date; so called ‘grandfather rights’ are almost unavoidable.

During my research into pilot transfer safety I became aware of the excellent Twitter initiative #dangerousladders, where members can post photographs of non-compliant ladder arrangements.

Over a short time I became friendly with the instigator, Valencia pilot launch coxswain Ignacio Chofre. After some discussion, we decided that a wider audience could be reached by opening a Facebook page. At the time of writing (June 2020) #dangerousladders has a membership of over 2,500. Although the group remains ‘closed’, anyone with an identified marine interest will be accepted. While it is often easy to identify problems with procedures, this rarely improves the situation unless remedial actions are proposed. The Facebook page not only allows members the change to raise awareness of the regulations, but also to discuss solutions. In the photograph right, for example:

▪ The pilot ladder is secured to the pipes on deck.

▪ Can these truly be considered to be strong securing points?

▪ This anomaly is relatively easy to rectify: place two securing pad eyes 915 mm (approx. one arm’s length) from the ship’s side, these pad eyes to be tested and certified.

▪ Observant readers will be able to pick up a number of other noncompliances in this photograph.

Let us see how a maritime pilot is transferred by helicopter to a ship. In this video, we discuss briefly some procedures in a helicopter/ship operation for the transfer of pilots.

Pilot onboard for Docking to Port of. Klaipeda Lithuania.
#seamanslife
#Bahaynabakal

Here’s a cool little video of the rough weather sea trails of ‘Port Láirge’ The Port of Waterford’s new Interceptor 48 pilot boat ready to be delivered next week. We had two days of rough weather, a Force 8 with 3.5m seas putting up some surf breakers over the Daunt and a second day with winds reaching Force 10 offshore, with 55kts of wind and 5m swells, allowing us to properly test her capabilities ensuring she's fully fit for purpose for the pilots and crew. Doing so we captured some...