Roberta Coppa (Fedepiloti): "There are still too many gender prejudices in our world". 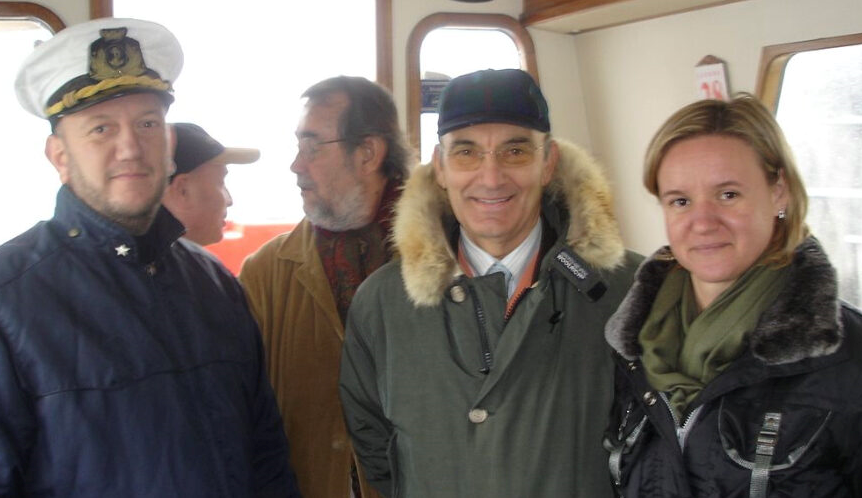 Article and fotos by ShipMag.it, translated by Marine-Pilots.com
original text (link) below this article

There was fog, it was a busy shift. Roberta Coppa, a pilot at the port of Venice, returned home at 4.30 am and was ready to resume her duties at 3 pm. "Shifts are hard, but you get used to them. But it's my job and I like doing it," she adds reassuringly. She and Teresa Matarese are the only two women in the Italian Federation of Harbour Pilots (Fedepiloti) team of 212 professionals.

"There are only two of us because the world of the sea continues to be almost exclusively the preserve of men," Roberta admits, confirming the figure that emerges from the latest report by the International Chamber of Shipping, which shows that out of 200 shipping companies only 7.5% of seafarers on board are women. "Unfortunately, this is the case. Something has changed for the better in the last few years, but still too little as the gap between men and women is still very wide".

How did you get started?
"I was born in Piedmont, I come from a family of professionals. I grew up between Valle d'Aosta and Liguria, my passion was born between Alassio and Albenga, when I used to visit my grandparents in the summer. I approached the sea when I was in high school and enrolled at the Imperia Nautical School. The first step was to embark on a ship".

Did you have any difficulty finding your first boarding?
"Many. I started with study boarding during the summer. This allowed me to get on a ship for the first time and to work within a company, Adriatica di Navigazione. Then, when I was hired as a trainee officer, the serious problems started."

Roberta Cotta, Fedepiloti
What were those years?
"The nineties, at that time many companies did not have female staff. The mistrust of women was very strong. However, I wasn't discouraged and sent out resumes everywhere. My perseverance was rewarded with two calls, Lloyd Triestino and Adriatica di Navigazione, which offered me a trainee officer contract. I opted for the second company. Here I did all the professional training I needed to take part in the pilot competition".

During your professional career, what kind of problems have you had to face and overcome?
"The main difficulty has always been and still is that of having to prove every day that you are equal to the men, especially from a physical point of view. This attitude forces you to build an armour, a sort of self-defence towards the outside world. However, I must say that over the years I have had a lot of satisfaction because my work has always been recognised by my superiors. And then the commanders of the ships I work with have accepted me and always accept me very willingly".

Compared to your early days, are there more opportunities for women today?
"I would say so, today many shipping companies, especially passenger ones, are looking for women to join their crews. But all too often they do it more for the sake of image and opportunity than on merit. And that's a bit of a pity.

Why did you decide to become a pilot?
"Because it represents a point of arrival for sailors. I took part in three competitions: Olbia, Taranto and Venice. I won the competition for the port of Venice-Marghera, and on 1 December 2004 I was called up for duty.

Is it hard work for a woman?
"It's physically and mentally demanding, because you have to climb up and down the biscaglina. The weather conditions are not always favourable. Then there are the shifts: the port never sleeps, it's operational 24 hours a day. The pilots, at all times, are trained to be ready to intervene, to keep calm and pass it on to others even in the most difficult situations."

Roberta Coppa climbing on the biscaglina

Roberta Coppa climbing on the biscaglina
How do you manage to reconcile work, children and family?
"It's not easy, and I have an extra complication: my partner is the head of the tugboats at the port of Venice. His shifts are on top of mine. However, we manage to reconcile our work with our family, partly because we have a 7-year-old son, so our presence at home is essential. As I said, it's not easy, but with the right organisation everything is possible.

What would you like to change in the Italian port system to put women on an equal footing with men?
"I would like women from the shipping world to participate more in port life. For example, once upon a time women were allowed to join the Coast Guard, then they blocked the competitions. Pity. Take the case of my profession: pilots are the most competitive in the world, they have fewer accidents than others, they cost less and they are the most productive. Why can't a profile of this kind be useful in other port areas?

What advice would you give to a woman who wants to pursue your profession?
"I have always been advised to study and do something else. Paradoxically, by instinct, that's the answer I'd give: because ours is a tough profession and you need great strength of character. Only someone with the right temperament can think of becoming a pilot. However, even in such a physical job, it's important that women remain women without losing their femininity, because that's the only way we can bring something more to our profession.
Original article by ShipMag.it (Italian)
What's your opinion on this?
Login or register to write comments and join the discussion!
Read more...

Article Capt. Luigi Mennella is the new President of Fedepiloti

Capt. Luigi Mennella is the new President of the Italian Federation of Ports Pilots.

Apparently there were two crew members on board, but no pilot. One of crew was recovered and declared dead, another one, skipper of the boat, is missing.

LOC, part of AqualisBraemar LOC Group, is pleased to announce it is launching a new digital solution to enhance safety of marine operations within ports and harbours.

The Port of Townsville has welcomed the newest addition to its fleet of pilot boats with the arrival of the newly built Mantaray. The $3.3 million, custom-built vessel utilises high-tech equipment and design to maximise safety and efficiency for pilot transfers.