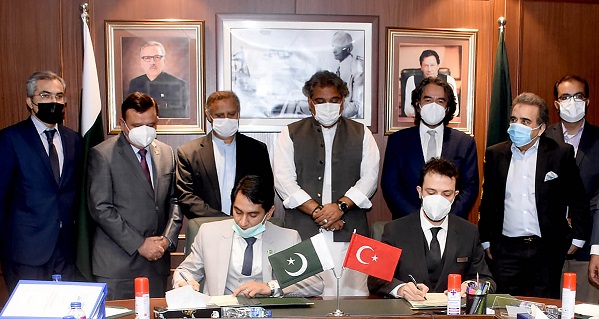 Text and photos by Sanmar

Sanmar Shipyards has signed six vessel contracts together totalling US$33.46 million with the Port Qasim Authority (PQA) in Pakistan for four high-performance state-of-the-art tugboats and two pilot boats. The tugs are scheduled to be delivered in 12 months and the pilot boats in 10.

The contracts were awarded following a hard-fought international tendering process during which Sanmar championed its new technologically-advanced Kocacay range of powerful and efficient escort and harbour tugs, based on the exclusive-to-Sanmar RAstar 3200SX design from Canada-based naval architects Robert Allan Ltd.The Sanmar Kocacay class tugs, designed in close co-operation with the Turkish tug builder and operator, and boast a unique sponsoned hull form, proven to provide significantly enhanced escort towing performance. Escort forces are enhanced by the effects of the sponsons as well as by the prominent foil-shaped escort skeg.

Three of the 32m x 13m x 5.6m high-powered LNG compatible tugs will have an impressive 75 tonnes of bollard pull (BP) ahead and astern, while the fourth will have an even greater BP of 85 tonnes.

The first two tugs in the series, called Thor of Scapa and Odin of Scapa by their new owners, were delivered to the Orkney Islands Council in the UK last year. They are being used for ship-handling, towing, escort and emergency response duties and have been purposely designed with a shallower draught than most other tugs of similar size to ensure greater operational flexibility even with the depth limitations in some of the piers within Scapa Flow.

The contracts with PQA for the ultra-modern tugs and two 20m pilot boats capable of 20 knots, were signed at a ceremony at the Ministry of Maritime office in Islamabad on 29 March 2021. It was witnessed by the Federal Minister for Maritime Affairs Syed Ali Haider Zaidi and Turkish Ambassador Ihsan Mustafa Yardakul. Commercial Projects Manager Ozge Abanuz and Procurement Manager Hakan Tunc represented Sanmar.

Sanmar Shipyards
Aydintepe Mh.
What's your opinion on this?
Login or register to write comments and join the discussion!
Read more...

Sanmar Shipyards has delivered two pilot boats to the Port Qasim Authority (PQA) in Karachi, Pakistan, which operates the expanding deep-water seaport with an annual handling capacity of 89 million tons in the country’s largest industrial zone.

Opinion Checklist of Root-Cause Pilot fall from the ships Ladder

Harbor Pilot Nasir Khan from Pakistan has sent his own checklist to Marine-Pilots.com - we share this list for our readers and look forward to an interesting discussion.

by Port of London Authority - published on 13 January 2022

By the end of this year, our sea pilots are set to have undertaken a record number of pilotage acts. The total number is set to exceed 10,700, with almost 99% of the acts completed without delay.

A PPU is a personal tool every pilot should have in his pocket ready to be operated for facing any unsuspected situation on the bridge. Marine Pilots and organisations in more than 30 countries worldwide rely on the TRENZ solution. Soon, their new model will be launched with some improvements.