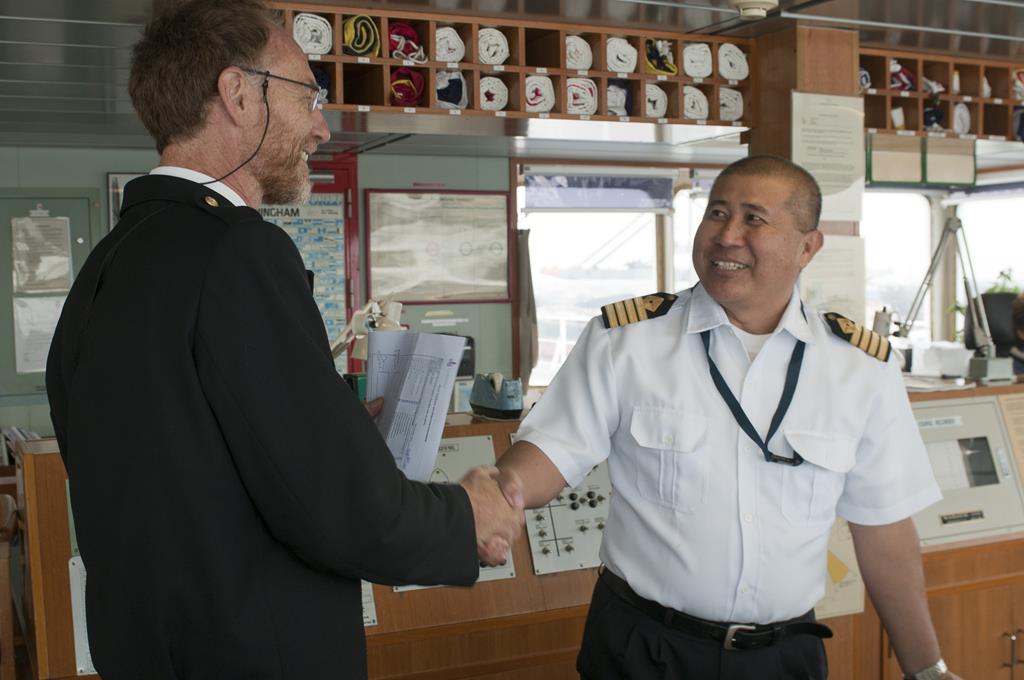 I have had the privilege of being at quite a number of meetings, conferences and seminars, sometimes representing The Netherlands, but mostly representing the Netherlands pilots. I have had many discussions about the role of pilots and pilot organisations, which lead me to write an article “What is the added value of pilotage?”, published in the February 2020 issue of Seaways.

By the way, this works the other way around as well: pilots often don’t realise that slowly but surely they take their own port as yardstick of how pilots work, and that isn’t necessarily an accurate picture of pilotage in general.

Still, I’m convinced that the ones who know best what pilots are doing, are pilots themselves. So I believe that it is up to pilots to communicate their role in a way that is understood by their audience, which can have very different backgrounds. If we feel that the job of pilots is misunderstood, I think that we have to evaluate our way of communicating.

An issue is that there are different legal descriptions of the job of the pilot. These roughly fall into two categories:


These seem very different descriptions. However in most legislations which use the 2nd description, somewhere in the rules and legislations there are articles that allow, or even normalise, the pilot taking the con, so in practice the differences are not that large.

The term adviser has not been chosen lightly, there are solid legal reasons to do so.

However in ordinary conversations I have noticed that the use of the term “adviser” may lead to a misunderstanding of the role of pilots. This can happen with people who are not actively involved in bridge activities, and even with captains and mates of ship types on which pilots fulfil an advisory role, and who do not realise that this is only part of the spectrum of a pilots job.

The term “adviser” can easily lead to a view that pilots stand in the corner of the bridge with a cup of coffee or tea and say to the captain: “the current is setting you to the North, here left, there right, did you see that barge? There is your berth”. I have met intelligent, responsible people who couldn’t understand why we “poach” skilled master mariners and give them one year training for that kind of a job. Neither are they are convinced that a masters license is required, nor do they understand why pilots want to come on board. From their perspective, as a pilot is ‘only’ an adviser and as he advices only about the local conditions, in these days it would be “easy” to give this advice from shore.

To avoid such associations I have started to use the term ”specialist” to explain the role of a pilot. This term can be used irrespective if the pilots are seen as “having the con” or as “an adviser”. The captain can be viewed as “general manager”. In those countries where the legal status of the pilot is “adviser”, the captain (within legal boundaries) decides how to employ this specialist. This can be either in a direct operational capacity or in a more advisory role.

For the sake of completeness, these are the descriptions of the terms as in the on-line Cambridge dictionary:


someone who limits his or her studying or work to a particular area of knowledge,    and who is an expert in that area:

-having or showing a lot of knowledge or skill:

The word “specialist” carries the notion that the person has had additional education and training, and has amassed experience. It reduces the notion that pilots are “only advisers” and advice only of local conditions. Aspects like shiphandling are better covered by terms like “specialist” or “expert” than by “adviser”.

This description of “specialist” needs to be expanded to a description of the role of the pilot and pilot organisation.  I have tried to do that in the earlier mentioned article in Seaways. I’ll shortly mention some aspects, and refer to the article for those who want to read my arguments more in depth.

Most discussion about pilotage revolves around  the individual pilot on the individual ship. Often overlooked is the influence pilotage has on the traffic flow: pilotage as a system. Pilots can understand the problems of other ships(-types) first hand, as they have been on board all these (type of) ships. The movements of ships with pilots, all with the same training, are predictable. Pilots have the opportunity to discuss formally and informally (meetings, pilots office/boat etc) so that consistency is improved.

Which leads to the importance of pilot organisations, which provide education and training, information, facilitate meetings etc. to keep the specialist up to standard, and promote predictability.

Another aspect that deserves attention is the role of pilots as risk managers, to minimise the risk that the ship presents to port (and infrastructure).

When I talk about the role of pilots, typically I’ll say that pilots are specialists, educated, trained and supported by the pilot organisation,. Because of their specialist knowledge and experience (local and  manoeuvring) they can anticipate the critical parts of the voyage, both for the own ship as for all ships they are going to meet.

Pilots have developed strategies to have maximum chance on a safe and expedient passage under all hydrological and meteorological circumstances (including aborting or not commencing the passage).
They have seen so many bridge teams in action, that they are able to identify the weaker areas of the bridge team and are able to give support in the areas needed (to indicate the difference between bridge team and pilot, I call the combined team “Team on the Bridge”).

I hope that I have given you food for thought on how to verbalise the role of the pilot, who is supported by the organisation, without neglecting the larger picture of pilotage as a system.

In normal conversations we generally do not use legal terms. Outside of legal proceedings, if the role of the pilot is mentioned maybe you could consider to avoid the use of the legal term “adviser” and instead use words like “specialist” or “expert”, which are closer to the operational reality and can be used whichever the legal system.

Login or register to write comments and join the discussion!
KC
Karolina Cirjak United Kingdom
Excellent article Ed. It does matter how Pilots are referred to, legally and practically.
0
PB
Petar Bubic Split Maritime Pilots, Croatia
From the legal point of view, it doesn't matter whether the pilot is called "an advisor" or "specialist".
0

Herman Broers Loodswezen Rotterdam - Rijnmond, Netherlands
When a company hires a consultant, that person is en expert, a specialist, and an advisor. The Company still holds the responsibility of the management since the consultant does not know all ins and outs of that company. Hiring a pilot is much alike. In my opinion, the master should be encouraged to keep on thinking for himself, just as the pilot should do in his role as advisor, expert, specialist. Together they will then form a team which brings together the best of both worlds: knowledge of the ship, local knowledge and a combined year long experience of maritime expertise. So for the question " Best performance, master or pilot?" , forget the "or", embrace the "and".
4
RC
Ricardo Caballero Vega Panama Canal Pilots Association, Panama
Many might not agree with me, but irrelevant of the definitions of "adviser, specialist, or expert" to fill a legal gap, in reality is pilots, being all of the above, should always have the conn of the ship. I am sure this is what actually happens in most ports and waterways.

The rol of pilots still remains underestimated by many out there. I guess, liability is a key word here.
2
A community member on 28 April 2021, 20:59 UTC

RT
ROB TANNER Port Authority New South Wales, Australia
Ed has completely encompassed the understanding and identity of what marine pilots do. The description of a marine pilot as a specialist is very accurate and to the point. We are definitely much more than an adviser.
1
HO
Harun Ozdamar Anadolu Kilavuzluk A.S. - Ankas Pilot Yarimca, Turkey
Pilots can be called "specialist adviser" then it could meet legal definition.
1
AP
Captain Andreas Paris Cyprus
Fully agree
1
A community member on 27 April 2021, 07:31 UTC

This video shows an introduction on the Spiral-Test-Manoeuvre and describes the procedure how to steer through this manoeuvre and measure the data needed. The results will be displayed in a characteristic diagram allowing to identify stable and unstable conditions and related, detailed information, e.g. spiral loop width and height, rudder angle of neutral effect. Samples of stable and unstable ship behaviour demonstrations will be shown by Fast Time Simulation using the SAMMON Planning tool.

Opinion What is a Tug's Bollard Pull and How İt is Calculated?
75