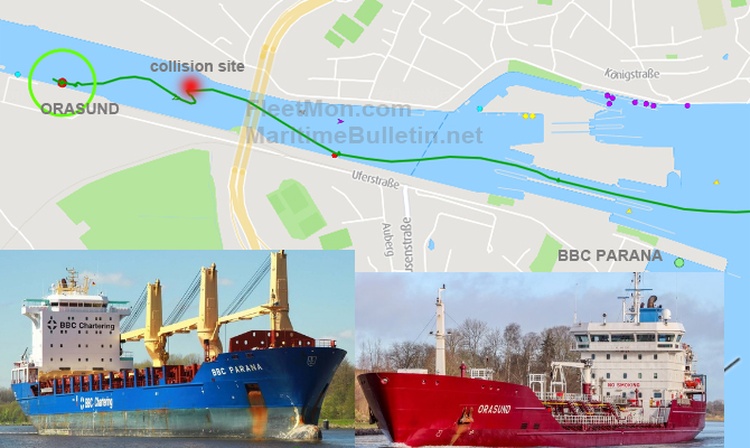 The ships were transiting Canal in opposite directions, both reportedly, sustained damages and were detained. Tanker was berthed near collision site, general cargo ship according to track, exited Canal and was berthed in port outside locks.

Ships weren’t identified, but according to tracks, tanker ORASUND and general cargo ship BBC PARANA were involved. ORASUND is en route from Liepaja Latvia to Ireland, BBC PARANA is en route from China to Umea Sweden. As of 1420 UTC Jul 27, both ships remained berthed in Kiel. Reportedly, ships didn’t report water ingress, nor there was any leak.
Apparently due to an engine failure, the ship drifted in the direction of a cargo ship, so that both collided. Even an emergency anchorage could not prevent the collision.

The British Tugowners Association are pleased to release to industry is latest guidance release, Recovery of Persons in Water (PIW) Guide to Good Practice for Small Vessels.

Video Saving Lives of Maritime Pilots with a Simple Action

Article Progress on the Autonomous Project “The AUTOPLAN” by UZMAR