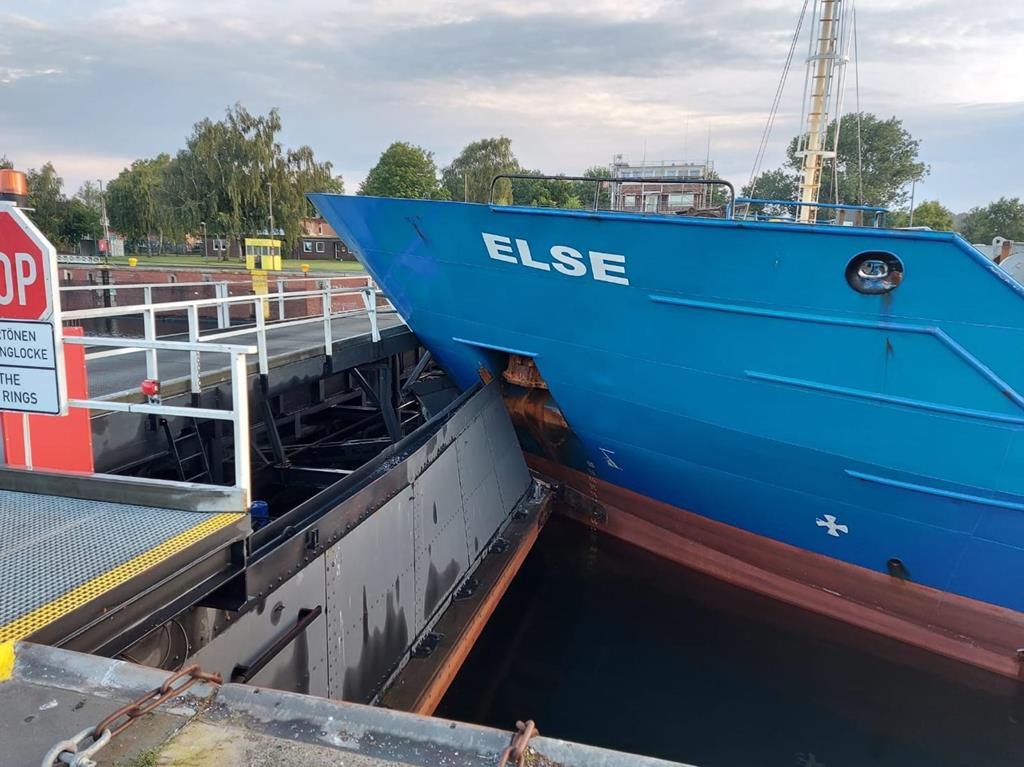 Astonishing and annoying accident in the German Kiel Canal today:

This morning shortly after 5 a.m. local time the vessel “Else” had a collision in the Kiel-Holtenau lock to the Kiel Canal.

The "Else" passed the pilot's boarding position without taking a sea pilot on board and collided from the outside into the closed gate of the new north lock. The bow bored into the metal construction and the ship was stuck for about six hours.

In the meantime, the freighter was towed away, but the lock gate is no longer usable, according to Detlef Wittmüß, head of the Kiel-Holtenau Waterways and Shipping Office.


Only one lock chamber in Kiel-Holtenau still in operation

It is still unclear how the accident could have happened. According to Wittmüß, divers should now examine the damage. Until further notice, only one lock chamber is available. Since the replacement gate is currently being repaired, the lock will probably have to manage with only one chamber for a longer period of time.


The 88-meter long freighter was actually on its way to France.

Video Vessel "ELSE" crashes into closed lock gate in Kiel-Holtenau on 29.08.2020

Shortly after 5 a.m. local time the vessel “Else” had a collision in the Kiel-Holtenau lock to the Kiel Canal.
The "Else" subject to pilotage passed the pilot's boarding position without taking a sea pilot on board and collided from the outside into the closed gate of the new north lock. The bow bored into the metal construction and the ship was stuck for about six hours.
For more information about this accident see related content below (articles).

On March 15, 2021, about 1302 local time, the oil tanker Riverside with a crew of 21 and 2 pilots was transiting outbound from the port of Corpus Christi, near Ingleside, Texas, in a loaded condition when the vessel lost propulsion and struck the no. 4 loading dock at the Moda Ingleside Energy Center. 1 No pollution or injuries were reported. Damage to the vessel was estimated at $550,000. The estimated property damage to the facility was $7 million.

The first trip of Captain Erik Dalege, the new President of EMPA - European Maritime Pilots' Association, is in Italy. In recent days, at the Rome offices, he met with the top management of Fedepiloti is Italian.