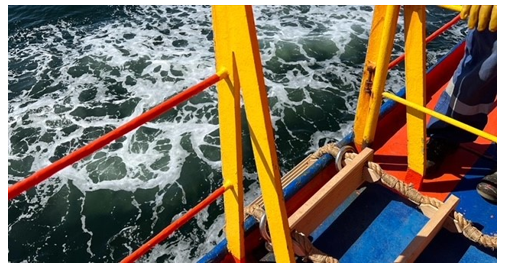 Good day everyone! It seems quite ludicrous to write an article on something as simple and basic as stanchions, but (here’s the but…) looking at numerous incident reports over the past few years, it proved to be the root cause of quite a lot of accidents with even fatal outcomes in some cases. Stanchions therefore are an often-overlooked part of a pilot transfer arrangement and therefore I want to give them more attention in this article. Of course, I hope that ship crews as well as pilots and everyone else who uses pilot transfer arrangements to board or disembark will have a proper check at the stanchions provided and if necessary improve them to be up to regulations…

To know if the stanchions provided are made/installed in accordance with the regulations, of course we need to get into the different ‘rulebooks’ we have on stanchions. So, let’s start with the holy grail of pilot transfer regulations: SOLAS ch.V reg 23….

No stanchions provided…
In rule 2 (general) it is stated that all arrangements used for pilot transfer shall efficiently fulfil their purpose of enabling pilots to embark and disembark safely etc etc. This is a very general statement of course, on which we shall go a bit more in depth further down this article. What we can conclude from this rule is that when a pilot falls down, it is a violation of rule 2: When you fall down, it is not safe… easy peasy…

Rule 4 of the same regulation mentions access to deck, well here we come a bit closer to the famous stanchions I guess: …… adequate handholds shall be provided. Again, a bit general, but also here we can conclude: if a pilot falls down, they are quite obviously not adequate.

This is basically all that is mentioned on stanchions in international law, for further details on this topic we’ll now have a look at the IMO resolution on pilot transfer arrangements laid down in IMO A.1045(27) adopted in July 2012.

In rule one (general) this resolution states “ship designers are encouraged to consider all aspects of pilot transfer arrangements at an early stage in design……. “ In the few photos earlier in the article we can clearly see that the stanchions were designed nor placed. Basically, this means the pilot transfer arrangement has not been designed in accordance with regulations, but of course it is nevertheless class approved. I have told this before and I will keep repeating this: whenever a pilot is confronted with a pilot transfer arrangement that is to be considered ‘non-compliant by design’, it means the entire chain of design, construction, classification, surveys, vetting and flag state inspections have failed, resulting into a dangerous setup.

Rule 5 of the resolution mentions some more details on stanchions:

Again, no stanchions, seems like a trend…
We now know a bit more on some regulations on stanchions and despite the fact it is really not rocket science…basically we’re talking about 2 steel pipes, that’s it, still it keeps going wrong with sometimes fatal outcomes. There is a minimum diameter of 32 mm and no max diameter. That’s a bit strange but one might assume that no one will be that ignorant to develop and install stanchions with a thickness making it impossible to have a firm grip!

No firm grip, slipping hazard..
The vessel in the above photo is a newbuild. All signed of and approved by class. I wonder if the class inspector actually inspects the vessel thoroughly or is he/she due to the immense work pressure that is put on class inspectors during the final stage of a newbuild process, confined in the office with 3 laptops, 2 computers and various telephones… working hard to sign of the lot? Looking at the minimum diameter of a stanchion on which we just read something, it seems ok: the diameter is more then 32mm.. thanks for nothing on this one.

Is it safe? No, it is not safe and therefore non-compliant. Actions taken by the writer of this article were to contact class/psc and owner of the vessel. Together with the owner of the vessel we worked out a solution and now the setup is safe to use. Basically, a waste of time and money when you have to do the job twice. Root cause is obviously that in the design face the rules on pilot transfer arrangements were overlooked or in best case scenario read diagonally and fast.

Despite the good outcome of this case, and many others were some people, let’s call them ‘strange people on a mission’, have assisted to correct wrong set-ups, basically people doing other people’s jobs…

Well now, regarding the thickness of the stanchions, shouldn’t there be a maximum diameter anywhere in the rules to prevent silly designs like the above one?

“Each access at the head of a pilot ladder shall have 2 handholds or handhold stanchions fitted. They shall not be less than 0.7m or more than 0.8m apart. Each stanchion or handhold should be rigidly secured to the ship’s structure at or near it’s base and at a higher point, should be round and not less than 32mm and not more than 36mm in diameter and should extend not less than 1.2m above the position it is secured to the ship’s structure.”

Finally, a rule that says it all, when a stanchion is installed in accordance with the above-mentioned rule, it is safe to use. It is also fool proof in my opinion: seems impossible to make a violation following this rule. This again proves that you have to write down every single detail and leave nothing open because otherwise eventually someone will find a way to do it wrong, as we have seen earlier in this article.

A fully compliant setup in all aspects (mv Cellus and Timbus)

A fully compliant setup in all aspects (mv Cellus and Timbus)

Why does it seem so difficult???

Why does it seem so difficult???
Basically, we have covered what there is to say on single pilot ladders. Whenever the distance from the water to the pilot entry point exceeds 9m, a combination shall be rigged. On the platform of the gangway leading to the pilot ladder, 2 stanchions must be installed as well.

In the photo above we can clearly see the outboard stanchion plus protective ropes have been forgotten for some reason… quite scary when you’re on a moving 60x60cm platform and there is nothing to hold on to or prevent you from tipping over the side. Normally the inside stanchion is not installed as per regulations. Upon asking the crew, they told me that some pilots demand the inboard stanchion to be removed… This again proves the fact that we are our own worst enemies, you just need it to transfer yourself from the ladder to the gangway and vice versa, it’s there for a reason.

See? Inboard stanchion missing…. Ow and this ladder snapped when the pilot tried to climb up… did I mention the badly rigged retrieval line as well as the ladder being uncertified and therefore illegal?

See? Inboard stanchion missing…. Ow and this ladder snapped when the pilot tried to climb up… did I mention the badly rigged retrieval line as well as the ladder being uncertified and therefore illegal?

Correct stanchions. Ladder incorrectly secured at the hull
Also, for ships fitted with a side-door (pilot-door) where the ladder runs down from a higher deck, a platform must be fitted. Luckily I haven’t seen a lot of errors with this type of set-up (platform wise I mean).

I hope this article has brought some clearness in the haziness called stanchions, 6 pages of text and photos on a pair of steel pipes basically. Please have a proper look at the stanchions when you want to board or disembark, it might save your life.

No stanchions again.. Looks a bit creepy even

No stanchions again.. Looks a bit creepy even
Kind regards,

Download: 1.000 stanchions around II (PDF)
Editor's note:
Opinion pieces reflect the personal opinion of individual authors. They do not allow any conclusions to be drawn about a prevailing opinion in the respective editorial department. Opinion pieces might be deliberately formulated in a pronounced or even explicit tone and may contain biased arguments. They might be intended to polarise and stimulate discussion. In this, they deliberately differ from the factual articles you typically find on this platform, written to present facts and opinions in as balanced a manner as possible.

The smart fairway digitalization pilot is a part of the EMMA Extension project that is funded by the Interreg Baltic Sea Region Programme. This summer, 34 smart buoys were installed in the Saimaa deep fairway, which is Finland’s most important inland waterway for merchant shipping.
Safety is enhanced in particular by the fact that the pilots and VTS can adjust the light output of beacons and the rhythm of lights to support the navigation of vessels in poor visibility and weather conditions....

Due to many incidents involving pilot ladders and man ropes in South Australian ports, and in effort to improve pilot safety, from 1 January 2022 Flinders Ports will require visiting vessels and their Masters to take additional precautions

Today a look at a special vessel that is commonly seen on the Astoria waterfront: the pilot boat that takes pilots to and from passing ships.

Sanmar Shipyards has signed six vessel contracts together totalling US$33.46 million with the Port Qasim Authority (PQA) in Pakistan for four high-performance state-of-the-art tugboats and two pilot boats. The tugs are scheduled to be delivered in 12 months and the pilot boats in 10.