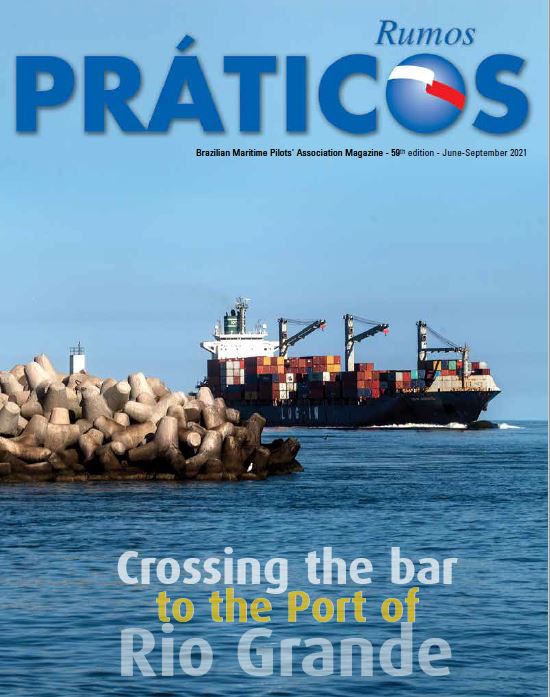 In this edition of Rumos Práticos, we made a concerted effort to address safety, both in pilot embarkation/disembarkation and in port projects.

We invited pilot Arie Palmers who works in the Scheldt region (Netherlands) to write an article on irregularities in combined ladders with a trapdoor. After his two accidents in 2019, Arie Palmers is now an active inspector for problems found in general embarkation arrangements and is cofounder of the #DangerousLadders group on Facebook.

An overview follows about how pilotage worldwide is coping with situations involving trapdoor ladders. In his article, pilot Marcio Fausto, from the São Francisco do Sul and Itapoá pilot station (Santa Catarina-SC), now suggests a checklist before boarding for different kinds of arrangement, including trapdoors. Palmers and Fausto are emphatic when recommending postponing boarding in event of irregularities, an approach that has proven effective in solving any observed shortcomings.

Also on the matter of safety we have an article showing how the preliminary risk analysis is more and more often adopted in port operation and construction designs, with the contribution of pilotage expertise.After addressing the São Francisco simulator in the last edition, we describe here the maneuver simulation center of the Rio de Janeiro pilot station, installed in April. The training space was visited by Isaquias Queiroz, the canoeing athlete, soon after winning his gold medal in the Tokyo Olympic Games. Check out his welcome on the following pages.

Lastly, continuing our series on pilotage zones, we visited the historic pilot station of Barra do Rio Grande (Rio Grande do Sul-RS), origin of Francisco Marques Lisboa, patron of our profession, and father of Admiral Tamandaré, Joaquim Marques Lisboa. If in the past he and his contemporaries helped brave the so-called devil’s sandbar, until the construction of breakwaters that lowered the risk of the crossing, today the pilots still collaborate to overcome congestion of infrastructure and increase the efficiency of operations in the port.

Klick on image below or link here for a download

Brazilian Maritime Pilots' Association
Practicagem do Brasil
What's your opinion on this?
Login or register to write comments and join the discussion!
Read more...

Article UKMPA announced the launch of a major rebranding

The United Kingdom Maritime Pilots’ Association (UKMPA) today announced the launch of a major rebranding following the UK’s recent departure from the European Union. The timely changes from a heraldic collection of flags to a modern visual image that more properly reflects an association that is proactive, inclusive and dynamic whilst at the same time maintaining its historical context.

The maiden voyage of HMM Algeciras #8-Rotterdam-RWG: The birds-eye view of the largest mega containership in the world on 3 June 2020. Look at the port-side aspect moored starboard-side in Rotterdam.

Filmed pilotboat Lesath outbound for her new pickup/drop off ..
These brave man now to bring the ships safe in Port of Rotterdam.
#scheepskijker_havefotografie #maritimepilots #portofrotterdam

Enjoy the tour from Bridge to Pilot ladder, disembarking of Danpilot.