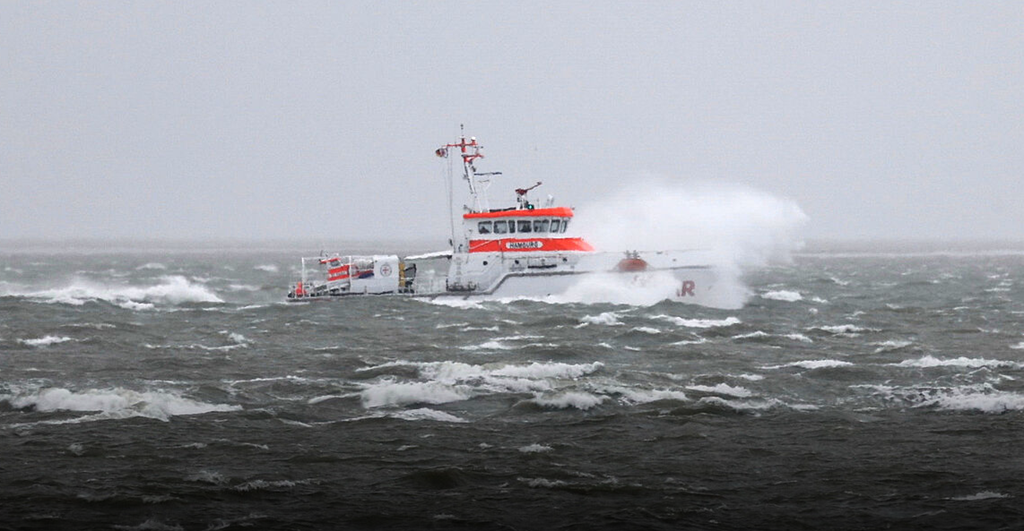 The crew of a pilot boat rescued a 47-year-old colleague from the North Sea during a severe storm and darkness. The pilot fell overboard early on Sunday morning.

The crew managed to bring the man back on board after 15 minutes, the German Society for the Rescue of Shipwrecked Persons (DGzRS) reported. The DGzRS stated that it was "a great maritime achievement". The 47-year-old was cold but responsive. He apparently only suffered from a scrape wound. A rescue helicopter picked him up by winch and flew him to Emden.

The DGzRS sent the rescue cruiser "Hamburg" after the emergency call. Additionally, a Dutch rescue boat and a rescue helicopter were in action. A "Johanniter" emergency medical technician supported the pilots in providing first aid to the shipwrecked person via radio.

Video World's largest Ever Ace arrives to the Port of Felixstowe on her maiden voyage. 12th September 2021

Does the growth of ships ever have limits? Perhaps less in shipbuilding than in the handling of the ships during piloting.

Video Ever Forward Pilot Was Distracted When Ship Got Stuck

The U.S. Coast Guard found the local pilot on the Ever Forward was distracted and the ship’s captain had left eh bridge before the massive cargo ship ran aground in the Chesapeake Bay. News4’s Mark Segraves reports. _______ NBC4 Washington / WRC-TV is the No. 1 broadcast television station and the home of the most-watched local news in Washington, D.C., the country’s seventh largest television market. NBCWashington.com is the market’s most-visited local television station website across all...

A court sentenced a captain to a total of 30 months imprisonment: It had been proven beyond doubt that the side ropes had been manipulated to make a ship inspection more difficult or to prevent it.

Article A review of the ship’s pivot point: Science, Maths and Observation’ Where is the centre of a ship’s rotation?
57
Article Pilot fell overboard during a storm off the coast of Borkum (Germany) and was rescued
51
Article Finnish-Singaporean Maritime Innovation camp explored new ideas from the contrast between pilotage operations of both countries
36